Regional parties have their limitations

The inference is clear: An alliance with the TD holds good only in Andhra Pradesh, where it has a good hold. 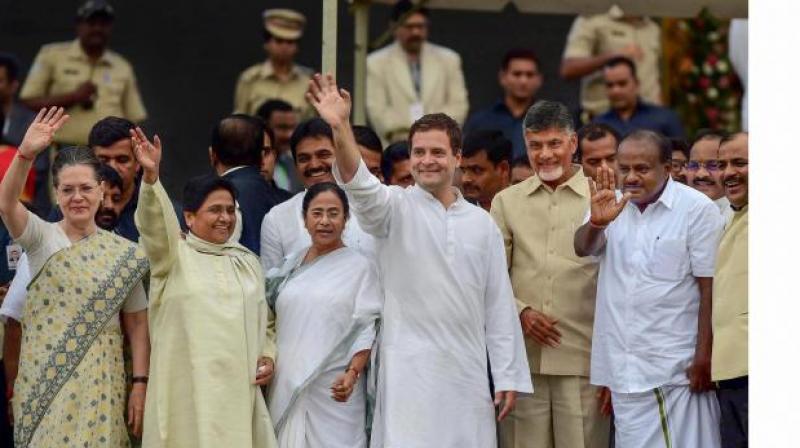 United we stand: A galaxy of opposition leaders across the country had converged at the swearing-in ceremony of Karnataka Chief Minister H.D. Kumaraswamy after the Congress and Janata Dal (Secular) successfully thwarted alleged attempts by the BJP to poach their legislators to reach the majority mark in the state.

BJP president Amit Shah pooh-poohed the attempt of Congress and other regional parties to form an anti-BJP front, saying that the strategy does not work because each regional party is restricted to it is own small terrain.

That there was a grain of truth in what he said was proved by the Telugu Desam’s (TD) ignominious foray into Assembly elections in neighbouring Telangana. The TD’s alliance with the Congress proved costly for the grand old party.

The inference is clear: An alliance with the TD holds good only in Andhra Pradesh, where it has a good hold. But TD leader and Andhra Pradesh Chief Minister N Chandra-babu Naidu does not seem to be strong even on his home turf during this upcoming general elections. It would be interesting to see whether Mr Naidu will want to continue with the Congress tie-up in his own state because it could prove to be as disastrous in Andhra Pradesh as it was in Telangana, but for other reasons.

It would be interesting to see whether AP’s Chandrababu Naidu and Telangana Rashtra Samithi's (TRS) K. Chandrasekhar Rao will sink their differences and become part of a common anti-BJP front because their respective strongholds are their respective states. The Congress or the BJP can align with only one of them.

However, the BJP leaders from AP have always complained that they were forced to play second fiddle to the TD because credit for Central government schemes rolled out by the BJP is appropriated by the regional party. Of course, unlike the Congress, the BJP does not have even a tenuous presence in the state.

There is also the problem with the regional parties entrenched in their respective states, as in the case of the Biju Janata Dal (BJD) of Odisha Chief Minister Naveen Patnaik, and the All-India Trinamool Congress (AITMC) of West Bengal Chief Minister Mamata Banerjee. The Congress is unlikely to surrender its space either in Odisha or in Bengal. The alternative is to agree to a post-poll alliance, but this comes with its own problems.

Since 2004, the Congress-DMK alliance has stood firm and it appears that it will continue through the 2019 Lok Sabha election as well though there have been overtures by the BJP’s Amit Shah and Prime Minister Narendra Modi to the DMK.

Similarly, the Trinamool, TD and the BJD were part of Atal Bihari Vajpayee’s NDA government at the Centre. Mr Chandrababu Naidu, along with Communist Party of India (Marxist) Harkishen Singh Surjeet, was also the architect of the short-lived United Front government of 1996-98.

Apart from Shiv Sena (SS) and the Shiromani Akali Dal (SAD), who stayed with the BJP, and the Nationalist Congress Party (NCP) of Sharad Pawar with the Congress, the others have been walking from one alliance to another.

While the Samajwadi Party (SP) is confined to Uttar Pradesh, the Rashtriya Janata Dal (RJD) to Bihar and the Janata Dal (Secular) to Karnataka, the Bahujan Samaj Party (BSP) though strong in UP wants to extend its sphere of influence in the Dalit areas in other states. The BSP has failed to make much of an impact in the recent Madhya Pradesh Assembly elections, and its alliance with Ajit Jogi's Janta Congress in Chhattisgarh came to nothing in the Assembly elections in that state.

There is every likelihood that if the BJP gets around 200 seats in the Lok Sabha next year, the TRS and the BJD may support the NDA formation. Even Mr Naidu and Mr Banerjee may change their minds in a post-poll situation.

The AIADMK, without its charismatic leader J Jayalalithaa, is a party without substance. The DMK may have second thoughts about going with the BJP if the latter secures a majority in the parliamentary election.

The BJP and the Congress can hope to keep the regional parties in their respective camps only if they emerge as the single largest party in the Lok Sabha. This is what political analysts would describe as a fluid situation.

There is a plausible argument that given India’s mind-boggling political diversity and its federal polity, the existence of regional parties reflecting the polychromatic panorama is inevitable. But the regional parties should confine themselves to ruling the roost in the states and leave the national scene to the two major national parties, the BJP and the Congress.

However, it is a difficult proposition because in states such as Gujarat, Rajasthan and Madhya Pradesh, the two national parties confront each another and the role of regional parties is minimal. The Congress is still a force to reckon with in Odisha and Telangana, and the BJP in UP. The political medley is a reality and it will remain so for some time to come. There cannot be a neat separation between who should govern at the Centre and who in the states.

As of now, the BJP and Congress have a national narrative of their own. The regional parties have not evolved so far even as they aspire to form a non-BJP, non-Congress government at the Centre.

The TRS chief, Trinamool chief Ms Banerjee and Mr Patnaik may believe that the need for a national narrative as such is not compelling, and that a bare programme of good governance is sufficient. But what is interesting is that neither the national parties nor the regional ones are willing to give up the idea of an omnipotent state that can dole out largesse to the poor and patronage to the rich.