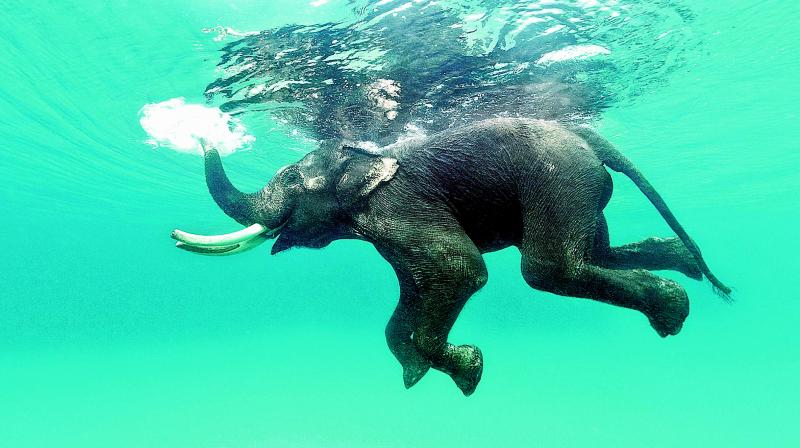 Rajan, a tusker swims at Radhanagar Beach in Andamans

A scuba diving trip to the Lakshadweep filled Sumer Verma with the utmost desire to share his experience with the world. After spending a year mastering scuba diving, Verma picked up a camera in 1998 and became India’s first underwater photographer.

“The kick was in photographing while diving. Lakshadweep is clean water and you could see turtles, dolphins, and sharks,” recalls the 44-year-old. The weightless feeling made chasing sea creatures more exciting for Verma. “It is surreal to be surrounded by water animals and corals. There is a huge variety of animals, from some as big as an elephant to something as small as your thumbnail,” adds the cinematographer.

For someone who has dabbled in wildlife, nature, and portrait, Verma prefers underwater photography simply because of its unpredictability. “You can wait for the perfect sunset and get the shot, but underwater there is no guarantee. At times you see something, but strong currents prevent you from clicking it. At times the animals are shy and won’t come close enough for you to film. This constant challenge of trying to get the good stuff keeps me motivated,” says the photographer, who has spent over two decades photographing the marine life.

Having shot in the waters of Indonesia, Lakshadweep, Andaman, Galapagos Islands, and Seychelles, to name a few, Verma enjoys when an animal comes close and allowing him to shoot. “Interacting with turtles is the most unique experience. Firstly, it is sacred in itself that the turtle comes up to you; otherwise, they swim so fast that you would not even know. Then you get to photograph the interaction, that amplifies the joy,” he shares.

Other than the water animals, it is the seascape, coral reeds, shipwrecks and tiny animals like the pygmy seahorse that attract Verma. “A shrimp fish is small and difficult to identify with the naked eye, but with a macro lens you can see the stomach full of egg cells,” he shares.

As for creating the right shot, the photographer recommends not disturbing the marine life. “If a turtle is coming my way and I go underneath, I get his belly. If I go above him, I can get a top shot of his shell. My ability and control in the water as a diver is what will determine my compositions,” he explains.

Verma believes in reducing the water between lens and subject, offering enough light to reach the subject. “I got the silhouette of Schooling Hammerheads that were swimming in a formation. So you are either balancing between sunlight, coral colours or blue water and creating a contrast, or you are trying to capture the synchronicity of the animals, which is at times only for a split second,” he concludes.