The power of visualisation and simulation created by VR is paving way for many industries. 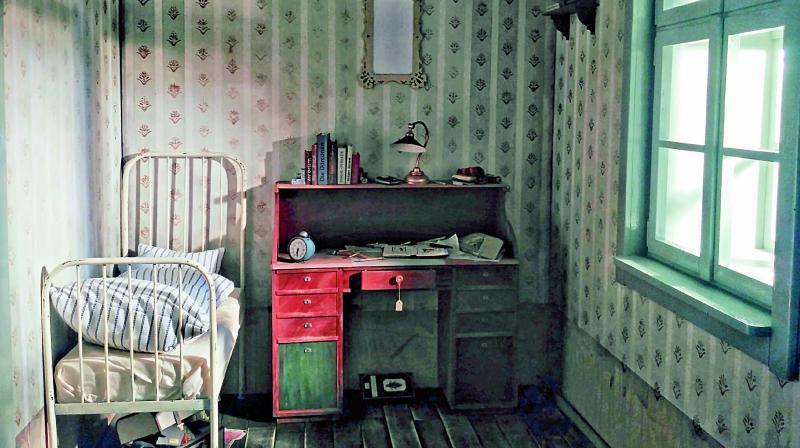 In the current technological revolution, Virtual Reality is going beyond gaming to unlock doors of the fictional world, travelling back in time and solving problems like never before.

Queuing up outside the darkroom of a state-of-the-art film school in Mumbai’s Film City, the final-year Animation and VFX students have been briefed to expect something ‘out-of-the-world’ inside the lab. A peek through the see-through glass door and we find a rather lanky student stumbling around the room, wearing a bulky headset, appearing much like a member of Daft Punk on acid. It’s a sight that inspires laughter and garrulous whispers from the students relegated to a corner of the room. Soon after, an assistant ushers me into the lab and helps me strap on a Virtual Reality (VR) headset, a pair of headphone, and gloves and slippers that have sensors to track motion. Almost instantly, I am transported to a cosy sleeping quarter. The room has a window that affords a spectacular view of the outdoors — I notice that it has been raining incessantly. The gloomy, dimly lit room extends a feeling of being trapped. As I begin moving towards the chest placed beside the window, my arms swoop, and instead of a human hand, an insect’s appendages appear. And if this wasn’t enough to trigger paranoia, there’s a blunt thud on the door, followed by voices demanding to be let in. I tread cautiously towards the door to respond to the rather authoritative entreaties. But just as I reach for the door handle, a reflection on the mirror to my left almost triggers rigor mortis. I have, as evident from the mirror image, been transformed into a life-sized cockroach.

Right out of the opening chapter of Franz Kafka’s novella Metamorphosis, this four-minutes long trippy experience-installation VRWandlung by filmmaker Mika Johnson is the closest one can come to experiencing salesman Gregor Samsa’s bizarre tragedy of turning into a ‘monstrous vermin’. Samsa has been one of Kafka’s most memorable anti-heroes, but this iteration of the character’s alienation gets a bit too real. Using VR, this immersive translation takes one into realizing that nightmarish morning when the salesman’s existential abasement took a physical form. “I have been obsessed with Kafka for more than a decade. As an adaptation, it’s a story about the transformation from human to insect and with VR as a medium, it is truly transformative. You go into Kafka’s world,” says Johnson, who combined Czech tradition of puppetry and animation with VR to push boundaries and provide a gateway to the fantastic, surreal, and dream-like world of literature.

Lost in Space
Johnson is among the many artists and innovators  who are galloping on to create immersive experiences for people using VR. Bulleted under New-Media, VR technology, essentially, enables users to have experiences in a computer-generated world. These experiences are mere simulations created in an artificial environment using various softwares and experienced via hardware such as headsets. Since the technical jargon may drown one’s ability to understand the potential of the technology, imagine visiting a festival in remote parts of Europe, or going on a jungle safari in Africa – all from the comfort of your living room. All of this and much more become a possibility by this technology en vogue. Although a rather short-sighted use of this technology has been peaking in the gaming industry for a while. When launched in 2016, the excitement about the technology was followed with instant disappointment when the devices could not deliver the over-hyped expectations of the consumers.  According to Prof. Shakti Banerjee, Head of the Department of Immersive Media Design at the MIT Institute of Design in Pune, the ubiquitous use of VR in the online gaming industry is a futile use of the technology which actually has the potential of unlocking many doors. “When we are talking about VR in games, those are basically games on X-Box. People have replicated the medium, but there is no innovation as such. It’s more like a gimmick, trying to add on another gimmick,” opines Banerjee. Now as the technology appears to be picking up, Banerjee argues that the potential of VR goes much beyond entertainment in the purview of “problem-solving” technology.

VR as a problem solver
The power of visualisation and simulation created by VR is paving way for many industries. In the health-sector, VR is touted to be an effective tool in training doctors, nurses and first respondents in how to deal with medical emergencies. Moreover, a quick trip to the ancient Greek civilization or outer space can make History and Science classes much more engaging and impactful for the students. “People have realised that VR has so much potential in different aspects. It has so much potential in the education field. It helps to visualise things and with users interacting, it adds value in learning,” says Banerjee. Using the same postulate as an impetus, Soumya Ranjan Harichandan along with two of his former peers from National Institute of Technology, Warangal, has adopted VR to reduce mining accidents by training miners and operators.

The trio developed an experiential learning process for the workers who just have to wear the headsets, to be transported to the simulated scenarios that include operating winders, excavators, lifts among others and be trained in how to use these heavy machineries and avoid accidents. “People coming in the mining industry are from the grassroots level, so they don’t have a high IQ level to grasp the higher-level concepts. In that matter, an operator or workforce needs to be trained on certain procedures like lifting heavy equipment that requires a lot of sophistication and takes a lot of time to teach. Since the already existing simulators are very expensive, the medium level mine owners do not prefer investing in those simulators,” explains Harichandan.

The software developed by their start-up CUSMAT Technologies is already being used by the mining giants such as Manganese Ore (India) Limited (MOIL), Neyveli Lithium Corporation (NLC), among other companies. “One mistake that start-ups that often committed during the initial hype were to just regard VR as technology. It’s not really just about the gizmos, it’s about how you use it to solve a problem,” adds Harichandan, revealing that post-training 3,000 operators at NLC, the accident rate dropped to 40 per cent of what it used to be.

Back to the roots
Stories are intrinsic to human experiences. Twenty-one-year-old Sparsh Ahuja knows what effect narratives can have in one’s life. As a child, Ahuja would often listen to his grandfather reminiscing his childhood spent in their ancestral village in the pre-Partition Pakistan. He would often be spotted scribbling in Urdu in an old tattered diary, recounting the stories of his migration from Attock to New Delhi in the 1947 Partition, and would occasionally express his desire to visit the home that was no longer his. It was when Ahuja went to study at Oxford University and came across his Pakistani peer who shared almost similar family history, the duo realised how stories of shared trauma born out of the seismic shift have gripped and altered life on both the sides of the border. And so, the duo along with their peers launched Project Dastaan, a venture that seeks to reconnect Partition migrants with their places of origin on the other side of the border via VR. In a video uploaded on Project Dastaan’s site, Ishar Das Arora, Ahuja’s grandfather, is seen recounting his memory of their house in what was then West Punjab. “My house was in front of a mosque, I remember that much…People had a lot of faith and respect for that mosque, even the Hindus. Everybody used to live in harmony; there were no complaints. Later, when there were riots, some of our friends turned their backs to us. One night, our house was vandalised, and we were never able to return to that house. I was in second grade,” reminisces Arora.

While Arora’s wish to visit his childhood house may soon become a reality with VR, another Partition migrant from the other side of the border, Dr. Saida Siddiqui, who migrated from Lucknow to Karachi, still yearns to behold that Peepal tree with ‘shining leaves’ outside her house in Lucknow. “I want to take these people back and VR was the most realistic way I could do it. It provides a kind of immersion that the traditional documentaries can’t match up to. They can interact with the landscape; they can move their head in all a different direction to actually feel that they have been transported to the times they actually reminisce about. For me, that’s very special. Because in a way, it’s looking at a very fundamental event of the past with the latest cutting edge technology, and we are trying to bridge that gap” reveals Ahuja about his project that has support from authors like Willliam Darymple, and Yasmin Khan, VR filmmaker Gabo Arora and Nobel Peace Prize winner Malala Yousafzai.

In addition to developing an archive for anyone who wants to look at the human cost of Partition, Ahuja’s Project Dastaan is also a commentary on the politics of religious, geographical and political antagonism and nationalism, all through the scope of immersion.  “The reason why VR is so important for this experience is because unlike a traditional film where you are just an observer, with VR you can be your journey. It allows us to explore a lot of moral and ethical consideration that traditional documentary can’t do,” says Ahuja.

What makes Project Dastaan a venture to look out for are its purpose and its ode to a narrative. We, as humans, are hardwired to see narratives all around us, and it has been these stories and experiences that have pushed artists and creators to flatten our 3D existences in the 2D formats like paintings, photographs, and even films screened on screens. With stepping into the VR, where in addition to your visual, your auditory and aesthetic senses are also involved, weaving stories gets immensely challenging, as the goal of immersion is not just to experience but also to get lost in the crafted world. The reason why Johnson’s VRWanderlung is so provoking is because of Kafka’s story and Johnson’s impeccable storytelling skill. Hence one may invest in high-end headsets by OculusVR, HTC, Sony, Samsung and Lenovo among others, but if the purpose and the execution of the storytelling are not up to the mark, no advancement in technology can make VR a success. “I have seen a lot of IIT alumni starting VR start-ups, but after 45 seconds, they don’t know what to do, they don’t know how to navigate further. It actually requires storytelling to engage the user,” enforces Banerjee before going on to add, “Whether you want your users to really go into space and understand the whole solar system, or you want them to see chemical reactions, it’s all about how well you simulate the environment. You have to try to enforce the movements in such a way that it will be helpful to the user rather than just teaching them out of the way context. It is easier to get into another world, but that world has to have meaning to it.”