Kolkata-based poet and photographer Sonnet Mondal captures various shades of the daily life of locals in the Sundarbans. 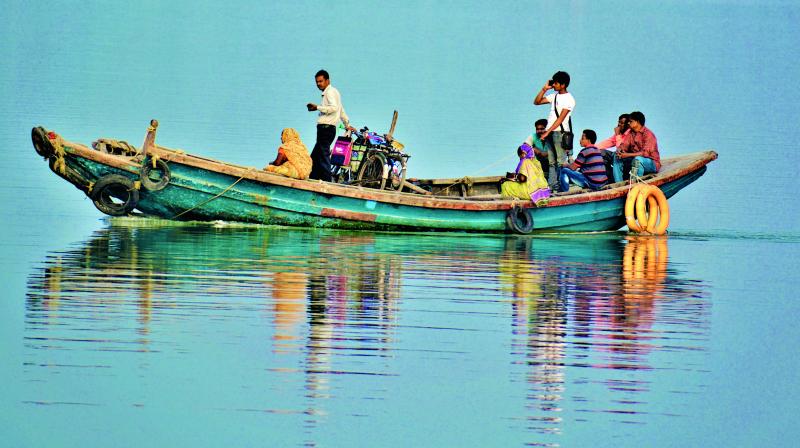 Locals commute from one island to the other in the Sundarbans

Internationally acclaimed poet Sonnet Mondal from Kolkata primarily picked up his camera to capture images that sparked ideas for his poetry. He enjoys finding moments of tranquillity and aesthetics everywhere he goes, which is reflected perfectly in his recent photo series about the Sundarbans and adjoining hamlets in West Bengal.

“Sundarbans has been on my list since 2009, when I visited the place for the first time with my college friends. This time, the tour was meant to relax and rekindle my love for the forest. But in between, there were so many subjects that posed many picture-worthy stories,” says Sonnet, whose photography is motivated by an interesting subject rather than a beautiful frame. “It is always the subject that is important for me. If you have a strong subject then the frame is secondary, because most times the subject has a lot of stories to tell. Hence you just can’t stop yourself but set the frame,” he adds.

The Sundarbans, which is a mangrove-heavy area in the delta formed by the confluence of Ganges, Brahmaputra and Meghna rivers in the Bay of Bengal, has always been an inspiration for many creative minds. But for Sonnet, it is the daily lives of the locals that inspired him to explore the place in-depth.

“It remains one of the prime themes of my travel photography, because local life shows you the real picture of the place,” shares the photographer, adding that the stark realities of the place are more visible through the local flora and fauna. “They share many anecdotes about daily survival encounters,” he explains.

Capturing the moments of the villagers’ daily commute from one island to the other through the Saptamukhi River, Sonnet’s images dive deep into the close realities of the villagers and how welcoming they are of their fate. One of the pictures in which Sonnet captured veteran American Poet Brian Turner — who had recently come to India to attend the second edition of Chair Poetry Evenings festival in Kolkata — talking to a villager, the relation of a local with a tourist on his land can be seen clearly.

“It was funny. The villager told Brian that he owns three cows, so Brian informed him that his grandfather owned 300 cows in his hometown in USA, which made this villager laugh. I couldn’t help but capture the moment,” recalls the photographer, who admits that he fell a couple of times on the boat while capturing the local commuters. “But fortunately not in the water,” he laughs.