Quixotic Rahul may well pull out a victory

Rahul Gandhi is at his wits’ end as to which way he should steer the party. 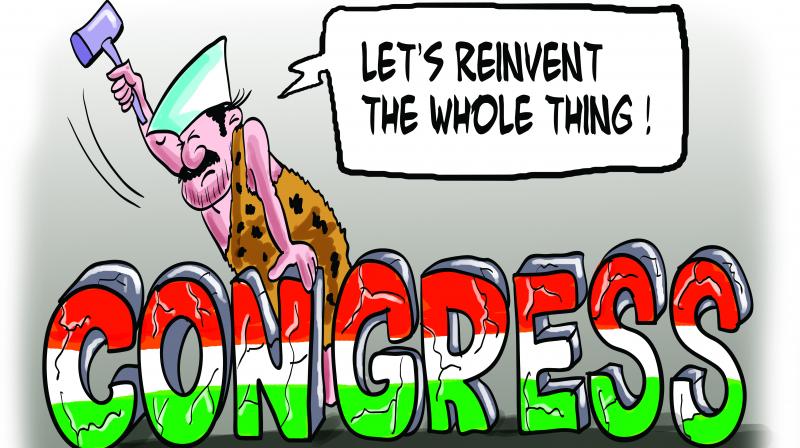 The BJP is perplexed with a Congress president who speaks the language of the post-globalisation yuppie. Modi’s cultivated image of the brave warrior who will destroy enemies is likely to be unhorsed by Rahul Gandhi’s simple and simplistic barbs.

The Congress remains unflappable, in victory and in defeat, in office or out of office. This is mainly due to the fact that the party has been around for the longest time in the country, and is an old war horse in the best and worst sense of the term. There is an inbuilt attitude of indifference, even recklessness towards victory and defeat.

But Congress leaders and workers are quite blasé about the ever-turning wheel of fortune. There was a time when they thought they would never be defeated. But now that doughty rivals have emerged on the scene, capable of muscling them out, the Congress is reconciled to the changed scenario and makes little of it.

This can be seen in the fact that after scraping through the Assembly elections in Rajasthan, Madhya Pradesh and Chhattisgarh on December 11/12, the infighting about who should be chief minister began. And as they have been doing since 1978, the bickering members left it to the party president to decide. For the last 40 years, it is somebody from the Nehru-Gandhi family who has been at the helm and who was left with the unenviable task of taking the final decision. The party president, whether it was Indira Gandhi, Rajiv or Sonia Gandhi, and now Rahul Gandhi, cannot really exercise his or her will in choosing the local satrap, but is forced to weigh the pros and cons of choosing one over the other. And as one irate Congress member remarked, there is more democracy in the Congress than in any other party. This seems to have a ring of truth as one watches Congress’s inner-party tantrums. It would appear that Rahul Gandhi may have preferred to reward Sachin Pilot in Rajasthan and Jyotiraditya Scindia in Madhya Pradesh, and overlook the claims of Ashok Gehlot and Kamal Nath. But Gandhi had to work to make peace between Pilot and Gehlot, Nath and Scindia, and an undisclosed compromise was worked out between the supporters of each leader. It is indeed the party’s internal democracy working with a vengeance.

Three clear facts emerge about the Congress post the December 2018 victories in the three Hindi heartland states. First, the internal fissiparous tendencies remain in the party. And Gandhi is not really in control of the party. He had to give in to the foolish advice given to him that the Congress should align with the Telugu Desam in Telangana state, which has really cost the party victory in that state. Second, the BJP, its main political rival in the country, was literally snapping at the heels of the Congress both in Rajasthan and Madhya Pradesh, which shows that the Congress has to once again graze past the BJP in the 2019 Lok Sabha elections if it wants to make it back to power. Third, the Congress is willing to claw its way back to power in the 2019 Lok Sabha elections, but it will not be heart-broken if it does not. Because many Congress leaders believe that the electorate will sooner or later return it to power because there are not many experienced political parties around who know the levers of governance the way they do.

It is because of this “lotus-eaters” syndrome that the Congress does not want to reinvent itself, it does not want to think. If someone like Jawaharlal Nehru comes along with some new ideas, they are not disinclined to adopt it as a strategy without believing in the ideas. The Congress is dyed in realpolitik and Indira Gandhi exploited this strain in the party’s genetic structure. Rajiv Gandhi tried to turn the party a bit towards a free market orientation and the party unwillingly accepted the necessity of going along. Mrs Sonia Gandhi tried to hold the party together and looked to Dr Manmohan Singh and civil society activists for ideas.

Rahul Gandhi is at his wits’ end as to which way he should steer the party. He believes in a vague way in some kind of vague socialism, some kind of vague Gandhian idealism to reach out to the poor people. He is not really out of sync with the spirit of the times. Sensitive and educated people around the world are tired of capitalism and the cynicism of the now antiquated ethic of the yuppie of the 1980s where doing well for oneself is all that mattered. With globalisation and free markets in a tail-spin, people are looking for counter-culture answers in a way that is sentimental and spiritual.

In many ways Rahul Gandhi speaks the language of the post-globalisation hippie. That gesture of his — hugging Narendra Modi in the Lok Sabha after his speech during the no-confidence motion on July 20, 2018 — was that of a counter-culturewallah of the day.

The party is intensely political in the pragmatic sense of the term, but Rahul brings a touch of the apolitical to the job. This might work wonders for the party. His apparent naivete — the “pappu” epithet is quite apt but the word has lost it pejorative edge because Rahul was able to invest it with a certain innocence — is sure to win over the people, and it may help in winning the elections next summer, however narrow the margin. It is not Rahul’s political savvy that should worry the BJP’s top duo — party president Amit Shah and Prime Minister Modi — but his naivete, his “pappu-ness”, that should give them nightmares.

In a way, the BJP leaders have recognised the dangers of Rahul’s “pappu-ness” and now they want to fight him as politician-to-politician. This was evident in the rebuttal of Gandhi by Shah, finance minister Arun Jaitley and defence minister Nirmala Sitharaman in the wake of the Supreme Court dismissing the petitions in the Rafale fighter plane purchase deal on December 14. The BJP is now hitting out at Rahul for being a politician who tells lies rather than a bumbling ignoramus. The BJP is repositioning itself to battle Rahul Gandhi more than the Congress. This could prove to be a fatal blunder for the BJP as the cynical Congress marches under the quixotic Gandhi with naivete as his armour. Modi’s cultivated image of the brave warrior who will destroy enemies is likely to be unhorsed by Gandhi’s simple and simplistic barbs. The BJP will find it difficult to fight an opponent who is not vicious or malicious in his words.

The Congress-BJP contest in 2019 is a morality play of a different kind, and the BJP at the moment is confused as to how it should handle it. Political analysts may not accept it, but Gandhi has his narrative ready, the narrative of simplistic simplicity.