Raider of the most spark!

I have been playing and practising kabaddi for the past 14-15 years, says Anup Kumar. 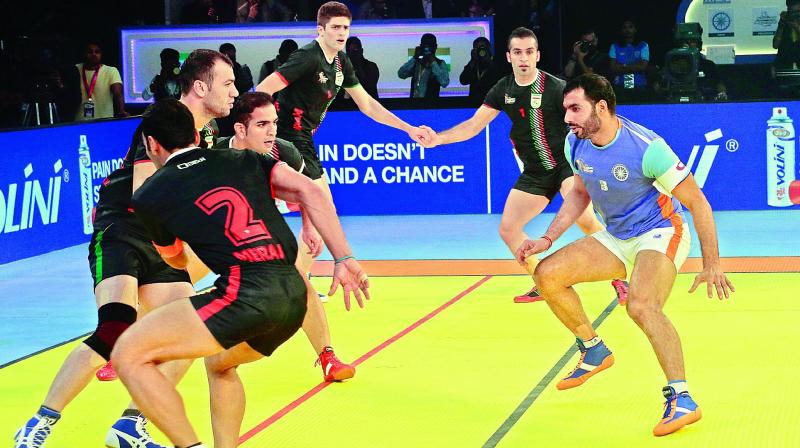 Kabaddi is the only passion in Anup Kumar’s life, and why not. He has been a flag bearer of the sport for more than a decade now, his most recent success coming at the World Cup in Ahmedabad this year. The 32-year-old Gurgaon resident emerged as the star raider of India’s gold medal-winning team.

That was just the icing on the cake as Kumar already had the 2010 and 2014 Asian Games golds in his kitty, apart from lifting the Pro Kabaddi League crown in 2015 as the U Mumba captain.

“My life revolves around kabaddi. My day starts and ends with kabaddi. The sport has totally changed my life from top to bottom. People started recognising me and want to take selfies with me or my photo and autograph. I really feel blessed that now I have such acclaim,” said Kumar, a deputy commissioner of police in Haryana.

“I don’t think if I had chosen any other sport. I would have gained this much success and popularity,” he said.

Hailing from Palra village in Gurgaon district, Kumar grew up playing kabaddi in his spare time at school, and started taking it seriously after turning 17.

At a tournament in Delhi, his immense talent caught the eye of Amar Singh Yadav, the coach of the Central Reserve Police Force kabaddi team. That paved the way for him to gain an entry into Delhi’s team after joining the CRPF as a constable. Kumar soon got a golden opportunity to represent India, and his first match with the national team was in 2006 during the South Asian Games in Sri Lanka.

“I have been playing and practising kabaddi for the past 14-15 years. It was a popular sport in my village, so I picked it up from there. People are crazy about kabaddi…  it’s their bad luck that nobody from my village went on to play the nationals or bigger tournaments. I alone play this sport in my family,” Kumar said.

The youngest of four siblings, Kumar loves spending time with his relatives and friends in his village home. He had never been to a theatre to watch movies but likes to watch inspirational films like Bhaag Milkha Bhaag.

“I do not like travelling or eating outside. I love spending time with my family. I have so many friends in my village and I just like talking to them and sharing my experience. Kaafi yaar-dost hai, gaon me mere… I don’t even go shopping much, or (for that matter) don’t take my wife or son Kunal Yadav anywhere, nor am I interested in movies or music,” said the father of a one-year-old.

Kumar has flourished throughout the three seasons of the PKL. He captained U Mumba to the title in the second season in 2015, besides taking them to the final on two other occasions, in 2014 and 2016. He has been an excellent mentor for all his team mates and his captaincy has been lauded by one and all.

“I have so many highs in my life but winning the Arjuna Award in 2012 was the most memorable moment of my career,” said the Asiad champion, who does not want to single out any person as he idolises so many people.

Anup gets his enormous power from his diet which consists of milk, curd and butter along with a healthy amount of almonds. He trains twice a day with two-and-a-half hours devoted to each practice session. “Travelling takes more time than training these days. I have to go for functions or programmes. I train a lot to remain fit, and for mental strength, I do yoga. I do not consult any psychologist,” he says.

A favourite travel destination for the Gurgaon resident? “I have travelled abroad and I like each place as they have very systematic rules and regulations and it impressed me immensely. Traffic and pollution in our country are big issues but there (overseas), everything is so smooth. I went to Mount Abu in Rajasthan and I liked that place,” says the Indian skipper.

The star raider feels that the future of kabaddi in India is bright, and the sport will grow gradually. “I have achieved everything in my life. No dreams are yet to be fulfilled, except I want kabaddi to be included in the Olympics. This is my last desire,” says Kumar, who likes to give credit to his whole family for his success.