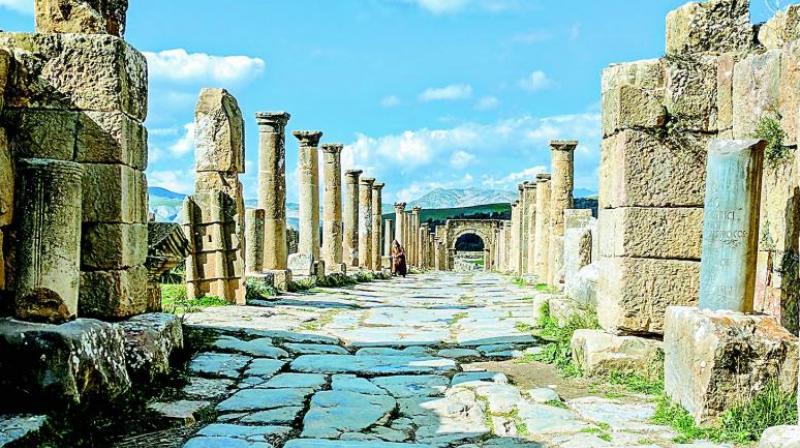 The Roman ruins of Tiddis.

Algeria may not have always been counted among countries that spark one’s interest but, given its rich history, culture and people, it is today on every traveller’s bucket list. In fact, I would say chuck the touristy countries, like France, Italy and Spain, and take in the impressive sights of the expansive Sahara desert and the Roman ruins which can give the Colosseum a run for its money. 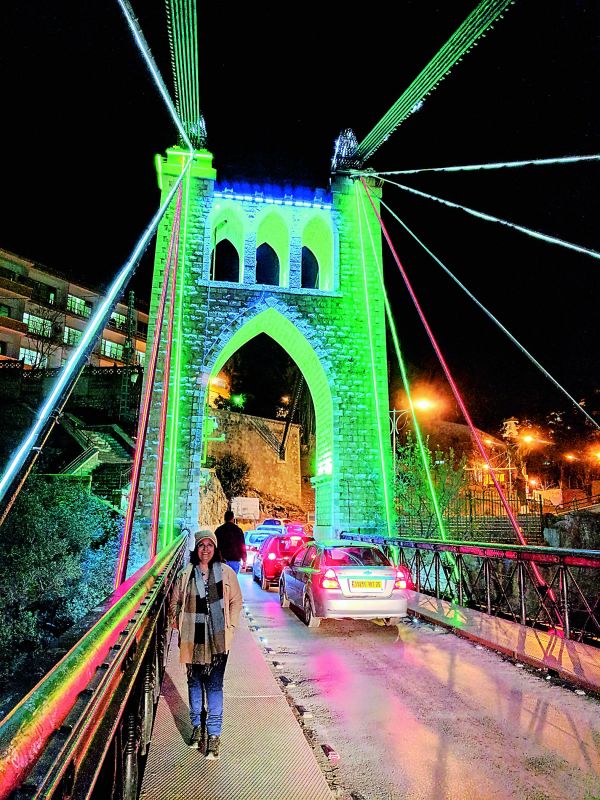 Constantine, the city of bridges

Algeria has a varied history, with many empires and dynasties leaving their mark on the land. It was ruled by the Byzantines, Turks, Spanish and Romans until the seventh century, when Arab Muslims finally captured Algeria and converted the people to Islam. 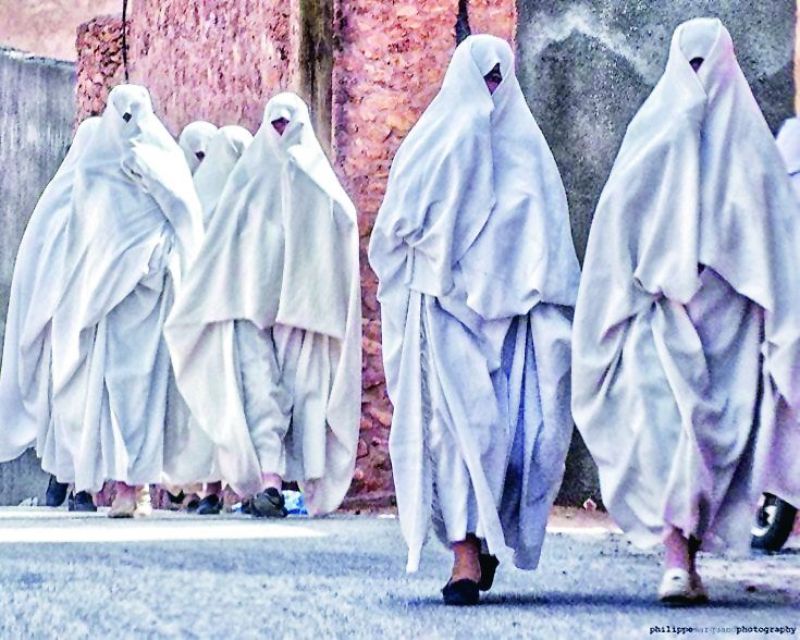 Women of Ghardaia wearing the kambhooz.

My first impression, as soon as I landed at the very humble Houari Boumediene Airport, was of simplicity, for it was completely spartan with no fancy stores, souvenir kiosks or big restaurants.

Exploring Algiers
My first visit was to the old town or the casbah perched on a hill, overlooking the Mediterranean Sea. This site is maze-like with alleys, a dense sea of houses, domed minarets and mosques dating back millennia. In my long walk through the city, passing by the Martyrs’ Monument on the hill and the 1,000-year-old great mosque, I observed how Algeria is now picking up on tourists. The people I met were very positive that their government has started taking its tourism seriously.

Constantine, the city of seven bridges
Don’t confuse this city with Constantinople. This is Algeria’s most beautiful city. Called the city of seven bridges, it is surrounded by ravines and peaks, and as you look down you can see the forests and the Rhumel River gorge with a dozen historic suspension bridges. What a site to behold! I gasped to think of civilisations dating back centuries, as it existed even 2,000 years ago as a part of the kingdom of Numidia before the Romans, the Ottomans and the French.
On a drive around town, I saw some exotic gilded statues and cupolas, the statue of Emperor Constantine and the old French theatre with its Roman architecture. Spectacular is the word! 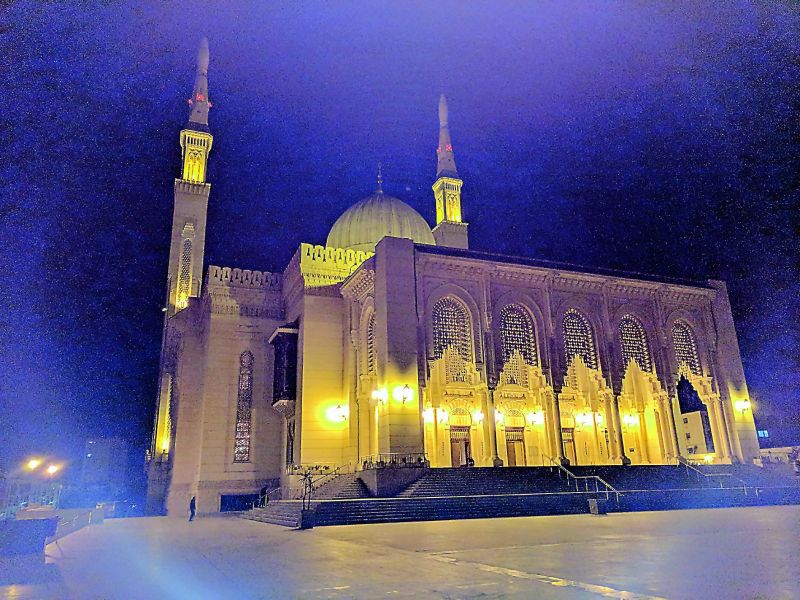 The grand mosque of Algiers

Flying into the Sahara
The Saharan desert town of Ghardaia is just an hour by plane from the capital Algiers into the pentapolis region of Mzab Valley. Pentapolis because Ghardaia comprises of five towns. Both architecturally and historically rich, the region is a 11th Century settlement of Mozabites, Ibadi Muslims who are different from the Sunni and Shia sects of non-Arab Muslims.

There are five separate villages, all fortified by rocky hills that protect them from nomadic groups. All five settlements are anchored by a mosque at the top of the hill with the minaret serving as a watchtower since it was at the highest point, while all the other houses were of a similar size. Within the village there are no vehicles, just longwinding hilly stony paths. The Sahara’s temperatures are very harsh and the heat scorching, the walls act like a protective guard. The Mzab Valley is very isolated and has managed to maintain its culture. It was evident that the traditions here are strict and without a local guide, it was not possible to roam freely through all five villages.

The suspense of the Ghardaia women
Throughout my stay here, I would observe these women in full white cloaks with just a single eye left uncovered, roaming the streets without making eye contact with anyone. Pictures were not really permitted but I was fascinated every time I encountered one of the silent, white clad women scurrying or gliding past me and actually disappearing within seconds. I was told that those with one eye covered were women who were married, while women who exposed both eyes were still single. An easy clue for unmarried men!

Timgad, Tiddis and Djemila
Algeria is famous for its many Roman ruins due to its various occupations in the past. The finest Roman sites I visited were Djemila, Tiddis and Timgad, all perfectly preserved with huge amphi-theatres, the royal seat, bath houses and more. The best way to enjoy the ruins is to linger around and absorb it all.
Algeria you are truly awesome and your sights are amazing. While the big cities have a liberal atmosphere with women driving around the place, the Saharan culture is traditional and takes you back to the days of yore. Completely safe, as my guide Omar pointed out, “What can go wrong in Paris, can also go wrong in Algeria.”

— The writer is a travel enthusiast. All photos are by Vibha Jain.

Facts and trivia
Reaching Algeria from India | Emirates, Etihad and Qatar have direct flights from Dubai to Algiers, the capital city.
Getting a visa | It’s very easy and takes three working days, provided you have a local agent’s invitation letter.
Currency used | The Algerian dinar. A 100 Algerian dinars is 85 US cents.
Official religion | Algerians are Arab Berbers, so it’s no surprise that the dominant and official religion is Islam.
Local customs | The most popular gift and a social norm in Algeria is etzai, a mint tea consumed all over north Africa.