Keepers of the frame 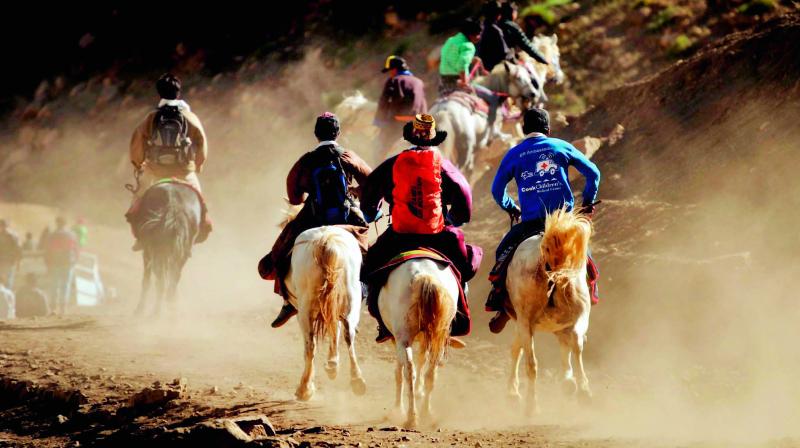 A horse-riding competition in progress

Sindhuja Parthasarathy's journey as a photographer began on a whim: After three years of corporate slavery, Parthasarathy bought a DSLR and took up a travel job. It was only after her work garnered appreciation from friends, with one helping to get her photos published in a magazine, that she discovered her true calling.

"I started with travel photography as a hobby in 2008. As a kid, I wasn't certain about the technicalities but I learned on the job," shares the 36-year-old, who now works as a freelance photojournalist alongside her corporate job. While travelling across the country, the locals of each place charmed her more than the place itself. "It is more about the culture and the locals. For instance, people in Spiti live in basements for up to four months because it snows heavily," shares the Chennai-based photographer, who captured the daily struggles of Chitkul and Spiti's locals. "It was a beautiful place that called for discovering how people lived there. But now photography is more than an art form to me, it is a tool of change. Now I look at how I can bring about change," adds Parthasarathy, who covers subjects like protests, Kashmiri half-widows, honour killings, transgenders, and acid attack survivors, among others.

Telling stories through photography has always been her only goal, as she realised that a picture is beyond the lighting and composition. "Of course lighting makes a difference, but my strength lies in the ability to connect with people, how I tell the story, approach the person in question, and build trust in dramatic situations," she explains. In her progression to capturing emotions, the documentarian states that the approach has changed completely. "A crying parent talking about how they lost their daughter is to capture intensity. I don't shoot whenever there is sunlight or a rainbow in the mountains. I will not have time to compose a frame or think of light at a protest. It is only luck if you get the right light. Truth be told, I hate taking pictures when someone is crying," says Parthasarathy.

Determined to tell more stories, the photographer emphasises being in the right place at the right time. "It is not about the quality of the photograph, but whether you are telling a unique story. The idea is to be able to create enough awareness to push for change, and bring to life things that are not often talked about," she explains.

Offering tips for budding photographers, Parthasarathy suggests thinking ethically when approaching a subject. "We have the privilege, so we should use it to tell a story and not abuse it. My picture is just a drop in the ocean. It is more important to be ethical and compassionate to people whose stories you are telling," she concludes.