Keepers of the flame

From dating apps to events, the shrinking Parsi community is innovating ways to keep their legacy alive. 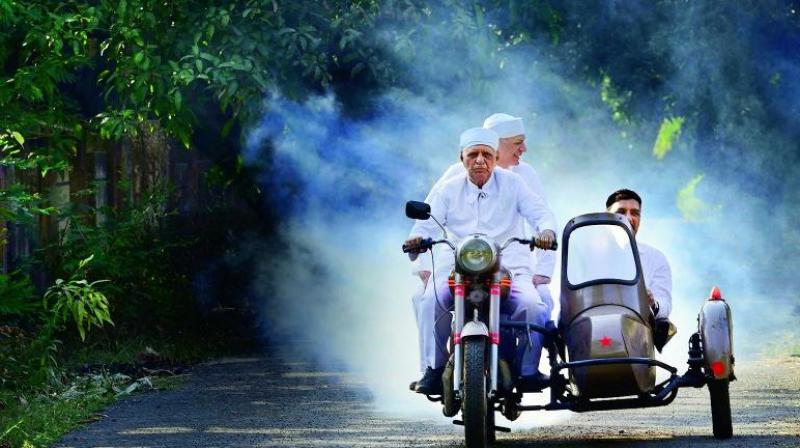 It’s the kind of success story the Parzor Foundation, that works towards the preservation of Parsi heritage, is proud to showcase.(PIC: SHANTANU DAS)

Thirty-year-old Kaizeen Sutaria recalls the day she first met her fiancé Sharoukh Banaji. On a muggy October afternoon, she arrived for a pan-India Parsi Matrimonial meet whose Facebook page advertised it as ‘two days packed with fun, frolic, games, dance, interactive sessions, and counselling.’ Sutaria, however, had little expectations of meeting a potential life partner through this fast-track matchmaking. “I went there just to make friends,” she says. Running through the line-up, she eventually met Sharoukh, the last of the prospective matches. “He was the only one I spoke to the most and was pleasantly surprised that we had similar outlook and views,” says the 30-year-old human resource professional. The two decided to take the alliance ahead and met again the following day. Numbers were exchanged and after a few months courtship, the couple had their Rupyo Pehravno ceremony, which formally confirms their forthcoming union.

It’s the kind of success story the Parzor Foundation, that works towards the preservation of Parsi heritage, is proud to showcase. Pearl Tirandaz, who was a part of the organising committee at the foundation, calls it a ‘win-win situation’. “In today’s fast-paced world where everyone is stuck trying to make a good life for themselves, there is no time to meet someone new,” says Tirandaz. With more than 40 per cent of Parsi youth now opting for inter-faith marriages, such initiatives are a ray of hope for the community that is battling potential extinction. From 114,000 in the 1940s, Parsi numbers have plummeted, falling by approximately 10 per cent every decade. And without immediate intervention, they are projected to fall below 23,000 in the next few decades, eventually reducing this urbane community to a tribe.

Race against time
One may wonder how this progressive community came to such a pass. In 2011, the census figures showed the rate had accelerated to 18 per cent, and there are now just about 57,000 Parsis left in India, most of them living in Mumbai.  Late marriages, health complications and a reluctance to have children have all contributed to the falling birth rates. For every four deaths, only one child is born, leading to a fast decline in numbers. “The fertility rate has been declining from the 1850s and it’s been a cause of concern for many years,” says Dr Jehangir Patel, the editor of Parsiana, a community magazine. In 1948, Sapur Faredun Desai in his book A Community at the Crossroads, draws attention to the dipping population rate and notes that ‘in 50 years, the unmarried population has gone up by 40% while the married population has decreased by nearly 35%.’ Armaity Desai, his daughter and former director of Tata Institute of Social Sciences, further adds that despite her father’s warnings, the community never took the issue seriously in the decades that followed. “They kept saying: ‘We are not losing numbers as most people are settling abroad’. But in the last census when the census commissioner put a very strong note in the census report itself that they started becoming aware,” she says.

More than 70 years have passed and Desai’s findings are still relevant to the present generation of Parsis as it’s still challenging to find a suitable marriage partner from the same pool. As a result, more than 30 per cent of Parsis remain single now. “There is not much that we can do as we are following the trend of the western countries where the population is declining phenomenally because when people get educated, they want to maintain their independence and lifestyle. So I guess it’s the disadvantage of educating our youth, especially women,” says Yazdi Desai, the Chairman of Bombay Parsi Panchayat (BPP).

The community’s orthodox views on certain subjects pose more problems. Despite their otherwise progressive attitude towards women, the children of those who marry outside the community do not count as Parsis, as under traditional Parsi laws, lineage is passed on through the father, not mother. And conversions don’t hold any standing. Those with a rigid stance in the community fear that their legacy will be appropriated by ‘half-castes’. The issue of the ‘real identity of Parsis’ first came to a head in the early part of the 20th century when industrialist J.R.D. Tata’s father asked for a navjote (initiation) ceremony for his French wife. This was granted but when the newly converted woman attempted to enter a fire temple, she was denied entry. Following this, a suit was filed in the Bombay High Court in 1907 by the BPP. They contended that Zoroastrians had never carried out religious conversions in India in accordance with the promise given to the ruler who gave refuge to the first Zoroastrians. The judges presiding over the case traced the history of Parsis and came to the conclusion that only those with Parsi fathers are considered Parsis. “It didn’t say women were excluded but it didn’t include them,” says Patel. And more than 100 years later, the ruling still holds ground. “I don’t want to be orthodox but I believe that in order to preserve our identity, accepting non-Parsi children will be a misdemeanour. A step in the wrong direction,” says Desai. Pro-reformists, however, believe that such a stance is adding to the community’s woes. “I believe that if a man’s children are accepted as Parsis, there is no reason why the women’s children aren’t accepted. Why should we lose so many children because of this attitude?,” asks Armaity.

Womb to tomb
These circumstances broadly capture the plight of the community. Over the years, the BPP has tried various schemes to encourage procreation, which include offering housing subsidies and cash allowances to young couples, encouraging them to have more than one child. Alarmed at the prospect of losing its most dynamic minority, even the Indian government decided to take extraordinary measures, initiating a scheme called Jiyo Parsi in 2013 that included subsidised fertility treatment and other initiatives.

For Shernaz Cama, the founder of Parzor, every baby born offers a glimmer of hope that the community will be able to survive longer. “The question UNESCO asked me was that ‘Why is your community hell-bent on committing suicide?’ Jiyo Parsi was launched in order to ‘try’ and stem the demographic decline of an urban educated community. It was essentially a cultural preservation project,” she says. In 1999, UNESCO requested Cama to plan a project on the Parsi Zoroastrians of India. Cama, who is spearheading the initiative, first sensed a plunge in the early 2000s when she began travelling with a UNESCO team to Parsi settlements in Gujarat. “These were beautiful villages with quaint Parsi houses and a fire temple where you could smell the sandalwood and frankincense but there were no people. The fire temple would be opened only when priests would come once a week to light the fire. We called this the deserted village syndrome,” she says.

Members of the community believe that if Parsis cannot provide the best quality of life and education to their children, they opt not to have any. While most in the community are typically affluent, Cama says there are middle-income couples who find it difficult to fund fertility treatments. The Jiyo Parsi scheme provides up to `8 lakh for fertility treatment, delivery and postnatal care, and covers full costs for couples with an annual income of less than `15 lakh. The scheme covers 75 per cent and 50 per   cent expenses for couples with an annual income of `15-25 lakh and over `25 lakh respectively.  Till date, more than 170 couples have benefited and 219 children have been born. “All these couples, who would otherwise not have had a chance to become parents or have another child, have benefited from it,” says Cama.

For Yazad Gandhi (31) and his wife Karmin Gandhi (30), the prospect of having a second child seemed taxing and the soaring expenses that come with a newborn held them back. “We had planned that we would have two children with a gap of at least two years. So once our daughter was two, we applied for the scheme. Even the delivery charges were taken care of. When there’s someone who is helping out, why not have a second child to help boost our population,” says Yazad.

Another factor deterring young couples is the responsibility to care for older dependents, which often affects family planning decisions. “Studies have found that the Parsi community has one of the highest total dependency ratios in the world,” reveals Cama. As a result, under the Jiyo Parsi scheme, couples with a family income of less than `10 lakh per annum will get `4,000 per senior citizen to look after them and another `4,000 per month for each child, until the child turns eight. “That way, the burden becomes less for the couple in these expensive times. Since its launch in September 2017, our Health of the Community scheme has been able to support more young couples. It is overwhelming when we read letters that say how the scheme made a difference to their lives,” says Tirandaz

The initiative also comprises advocacy, with workshops to create awareness about the dwindling numbers of the community. The idea is to instill pride among the youth for Parsi culture through heritage walks, film screenings and workshops on subjects such as parenting. “In the last 40-50 years, there has not been enough effort on the part of our community leaders and community institutions to nurture a sense of pride in being a Parsi and unless we educate the youth, that won’t happen,” says Desai.

Pearl Mistry, counsellor at Jiyo Parsi admits that initially, it was challenging to get through to the younger lot. “They don’t usually attend community affairs and don’t read community papers. So, we began making inroads through events that youth organises such as the Holiday Program, a month-long camp for youth across India where they get career counselling and personality development workshops. We get ourselves invited there every year and hold workshops where we talk about Jiyo Parsi and about community-related problems. We don’t go about telling people to have babies.” A few months ago, Jiyo Parsi also launched a digital platform to encourage marriage within the community. The app will help connect those looking for partners from across the globe.

Way forward
But it could be too little, too late. The birth and death notices that are published every month in Parsiana tell a stark story.  From January to September this year, there have been 616 deaths. “The demographic fall is going to continue as the numbers are against you. It is an ageing community and most of them are beyond the reproductive age. You still won’t get a replacement ratio as not many will have three or four children,” points out Patel. Mistry calls the phenomenon an inverted pyramid. “When two Parsis get married and have only one child, there is a 50 per cent decline in our population right there. But through fertility treatment and advocacy, if we could encourage even eight couples to have two children, there will be a 60 per cent  increase. Whatever numbers we can get will help stabilise this gap,” she adds. But Cama is hopeful that their efforts will, to some extent, be visible in the upcoming census in 2021. “We are closely counting each birth and for us, every newborn in the community is a step ahead,” she concludes.