Age on Sunday   01 Oct 2017  Adventure is in my blood, says Satendra Sangwan
Age on Sunday

Adventure is in my blood, says Satendra Sangwan

Captain Satendra Sangwan led an expedition up Mount everest, with sheer grit and a prosthetic leg to help him up to the second camp. 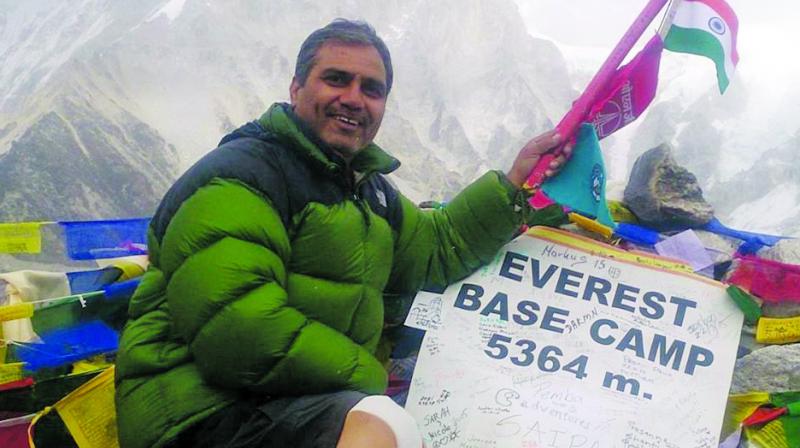 When (retd.) Captain Satendra Sangwan’s teams attempted to summit Mount Everest for the first time on May 23, the winds were howling, and swirling the snowflakes into dizzying patterns. A full-blown blizzard faced the climbing team trapped in their camp, in what’s popularly known as the Death Zone of the mountain. There were those who froze to death on Everest that night. Thankfully, they were not a part of the captain’s team, who were all able to make it to the top of the world’s highest peak a few days later.

When Captain Satendra, an ex-army officer, who has served in Siachen and Kargil, realised that a team was being formed for an Everest climb, he decided to try out for the team, prosthetic leg notwithstanding. After a year and a half of training and tests, he and a team of 10 others were selected from the ONGC Adventure Association in Dehra Dun to make the climb. As the team leader, Satendra had to guide his team from Camp 2, to ensure that they made the summit. “When you are up on the mountain, you’re cut off from the outside world, so it’s essential to keep the morale up. We were a team of three non-climbers and eight climbers. Out of the eight people who were supposed to climb, six finally attempted it, and I divided them into two teams,” the 46-year-old explains.

It was when the first team was up in the Death Zone, which comes after Camp 4, that the team’s problems began. “There was a white-out — there was no visibility, terrible weather and we lost all communication with the group. Much later I got a call from a satellite phone from one of the team members, asking me what to do. Before I could respond, the line got cut. Those were some scary times that we had to face,” shudders the team leader reminisces.

The first team had to come back down to Camp 2 to rest and recuperate. On day three, the ex-Captain helped motivate the second team to make an attempt on the peak and their attempt was a success. Jubilant at the thought that their fellow members had made it, Team 1 decided to make another attempt. “This time round, we were running against time. There are only two weeks of summer when you are allowed to try summiting Everest and after May 29, the sherpas remove all the ladders from the mountain making it impossible to climb. We were also low on oxygen cylinders, which would be vital to the climbers on their way up. However, our organisers negotiated with the sherpas that if the people are fit, if the weather permits and there is enough oxygen for three people to summit, then they would take another attempt,” he recalls.

Thankfully, there were cylinders left behind by other groups of climbers when they abandoned their respective missions on day one.

When the second group began their climb on the night of day five, the weather only got clearer and clearer until they were standing on the summit on day six with sunlight shining down on them. “The team was the only one there. It was as though they had an appointment with God,” Satendra smiles.

While having a prosthetic leg was the least of Satendra’s worries, the team leader made sure that his disability did not get in the way of his journey up the mountain. “I tried out two different prosthetic legs and made sure that I was equally comfortable with both, in case something were to happen to one of them. I also attended workshops on how to do minor repairs for the prosthetics,” he explains.

Having led a team up the mountain, the ex-army officer wants to try making the climb himself. “I’m going to make an attempt in 2019. This time I want to both climb and lead the teams,” says Satendra.  “Life is an uphill climb and adventure is in my blood, since I’m from an army background. I want to keep this up until I have made it to all the major summits across the seven continents,” he concludes.