The power of prayer!

A beautiful photo-exhibition that captures people across the country, in subjugation to God, will travel all over India. 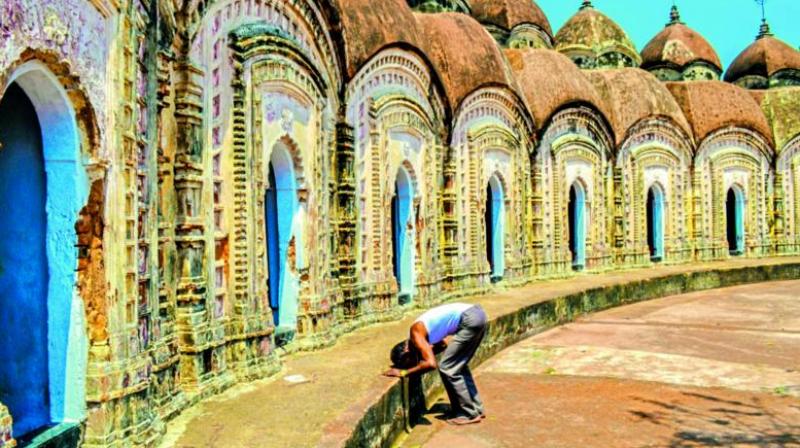 A man bows his head and prays at the Shiva Temples of Burdwan.

An astounding repertoire of photographs that capture how India prays has taken Delhi by storm and is all set to travel to different parts of India and the world. The ‘extra’ extraordinary collection of photographs — 55 photographs taken from across India — created and commissioned by first time art curator Shripriya Dalmia Thirani saw an unimaginable opening at Delhi’s Bikaner House with over 750 people in attendance — mesmerised by how the show asserts India’s true identity as a secular country through a single binding institution — prayer. The show that opened on June 15, and is now travelling to London later this year, is titled ALTARS OF YEARNING — HOW INDIA PRAYS. 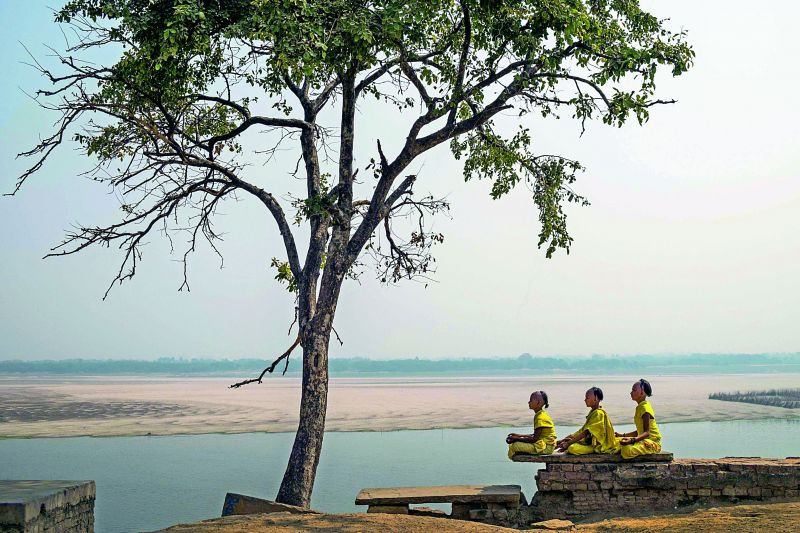 Small children training to be bramhacharis meditate and pray under the tree in Bodh Gaya. 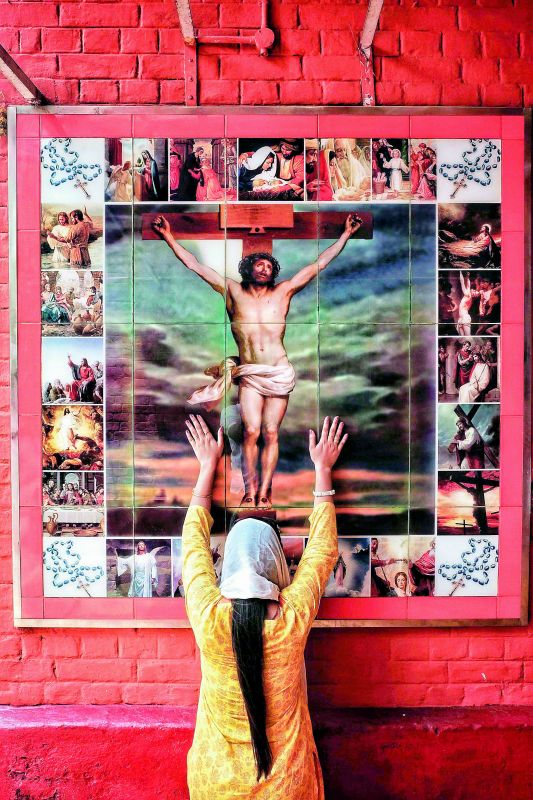 A woman worships Jesus Christ in the Anglo Indian locality of Bow Barracks in Kolkata. 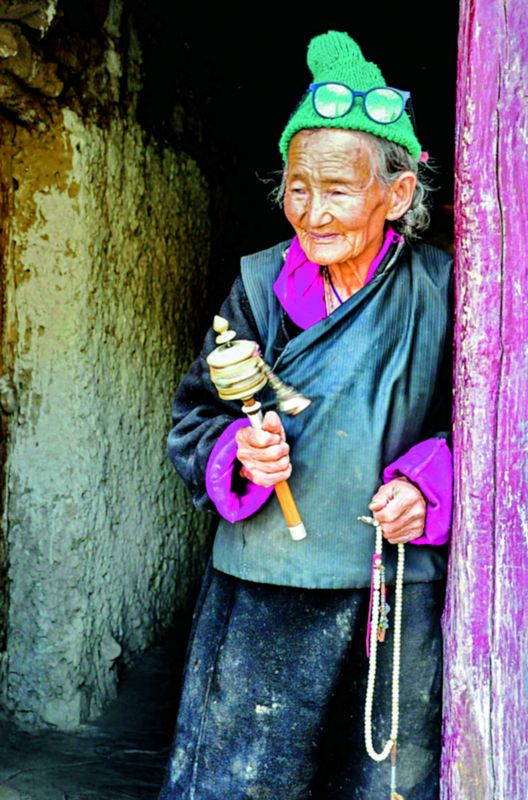 A woman silently mumbles while rotating her prayer wheels in the monastery of Lamayuru in Ladakh.

According to Thirani, the show is the first under the banner of the Queensline Art Series that she flags off next month. Union law minister Ravi Shankar Prasad who was among dozens of VIPs to open the show said “the photographs are majestic and heart-warming — a show that is bound to be a rage if it travels across the world as India’s true ambassador.” Thirani who is starting Mumbai’s largest restaurants on the sea by the end of this year, feels that prayer is the greatest institution of human life, much like language. 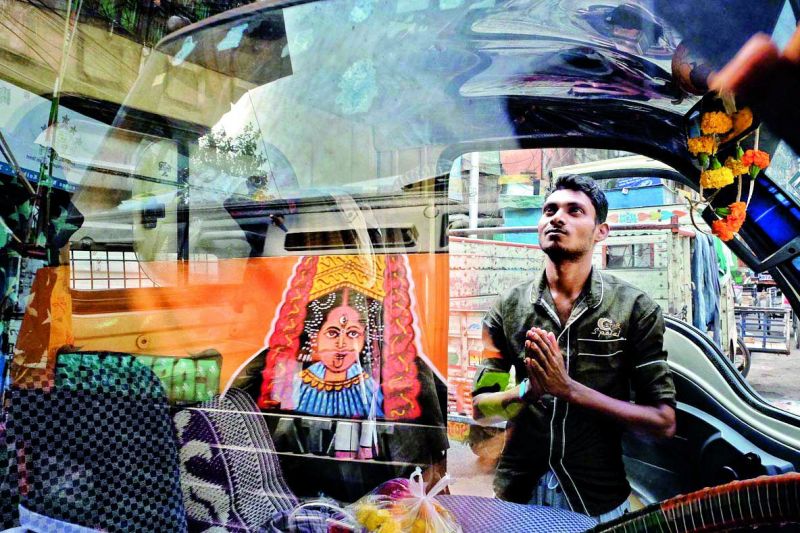 A man prays to the Goddess on the streets of Lucknow, with the reflection of it falling on the glass of a car parked in front.

“From one welcomed by birth or bid goodbye through death — prayer stays constant. It will remind the world of India’s incredible social fabric — a land of many people, many cultures, and many religions coexisting peacefully as one — prayer a common phenomenon among all of them,” explains Shripriya, adding, “The moment we pray is when we are most real, most true, most vulnerable and above all, most private. This show, that has never been done before, will be the first to catch people unaware, at the time of their prayer.” 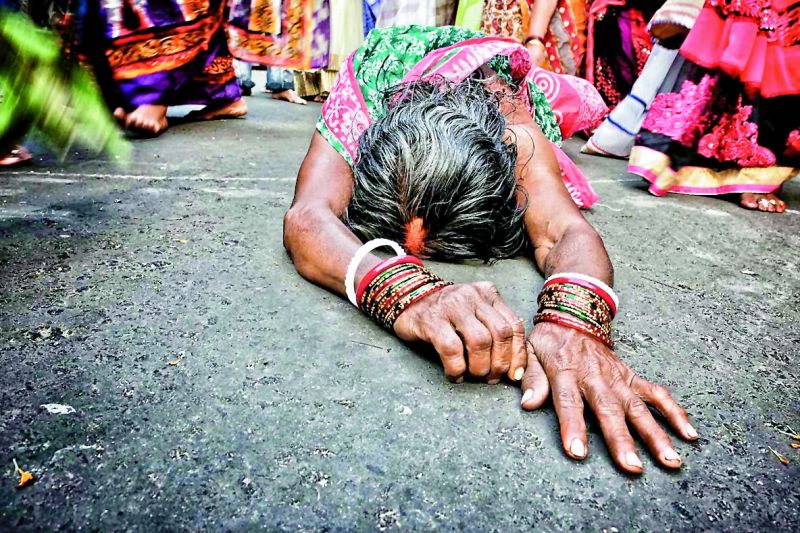 A woman takes part in the festival of Dondi that takes place during the summer. The devotees take a dip in the holy Ganges at Kalighat and go to the temple on hands and knees.

It is clear that the 14 photographers Thirani used to create the show was a carefully thought out endeavour. The photos follow the secret lives of bramhacharis in Bodh Gaya to the households of Bengal bidding good bye to Mother Goddess Durga. The Indian subcontinent is the birthplace of four of the world’s major religions — Hinduism, Buddhism, Jainism and Sikhism. There are roughly 4,200 religions in the world. 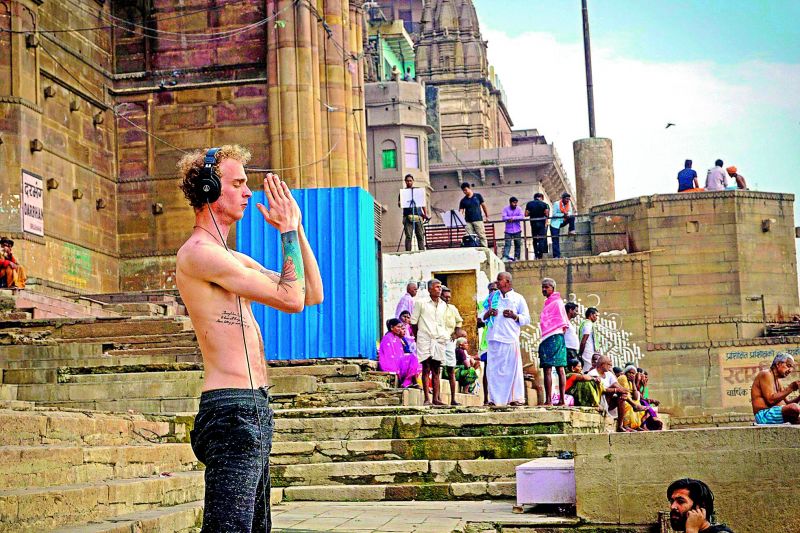 A foreign tourist listens to music while praying on the ghats of Varanasi.

“But what my show intends to reveal is the faith, and how man in flesh connects to God in spirit. Prayer for me is the greatest artform. Like art, prayer expresses the inner yearning of the human soul; in prayer, our souls reach toward God as God reaches toward us,” she says. “I, for instance, greatly believe in the power of prayer. I prayed when I became a mother, I prayed when I became an entrepreneur and I pray almost every day. These are values inculcated in me by my family and specially my parents. It gives me strength, courage and above all purifies me to deal with the world around me with honesty and conviction,” Thirani reveals.

India is a tapestry of multiple socio-cultural identities, woven beautifully into a single nation, and it officially became a secular nation in 1976 with the incorporation of word ‘secular’ in the preamble through 42nd Amendment of the Constitution. “As part of our plans, we are launching the Queensline Art Series that will showcase the most innovative and exquisite shows sourced from across the world besides commissioning home productions,” Thirani says.

She adds “One of the great legacies of India is its secularity and it’s known globally for being the continent of spirituality. Mahatma Gandhi used prayer to drive out the Empire. He said that prayer is not an old woman’s idle amusement. Properly understood and applied, it is the most potent instrument of action. We also intend to turn the incredible deck on Neverland and See Yah into a living gallery.”