The tiny island with an area of just about 29 square miles has been a playground of the rich and famous for a long time, and with valid reason. 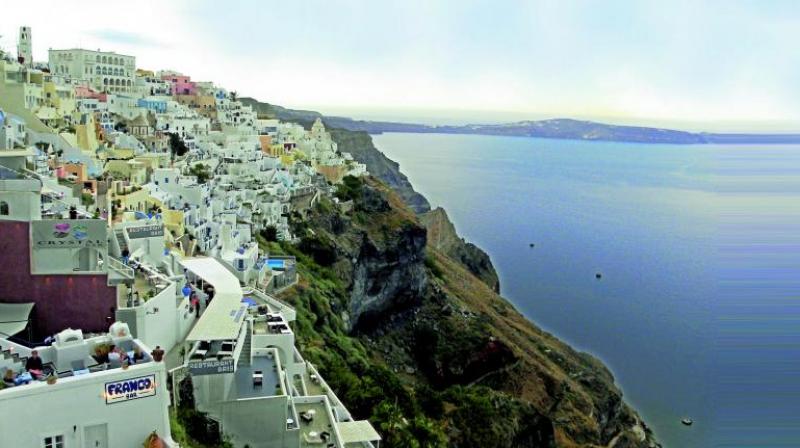 White washed houses spilling down the craggy rocks in Santorini.

The Cyclades group of islands along the Aegean Sea has hundreds of islands but Santorini remains an all time favourite of travellers to the region.  The tiny island with an area of just about 29 square miles has been a playground of the rich and famous for a long time, and with valid reason.  Imagine a beautiful island standing atop towering multihued cliffs, with beautiful turquoise blue waters at its feet. Effortlessly, Santorini manages to floor the visitors with its beauty. Thousands of tourists travelling to the island will vehemently vouch for the attractions of the tiny island, a few of them swearing to return.  Santorini needs no validation, though. It is spectacular and the islanders know that. 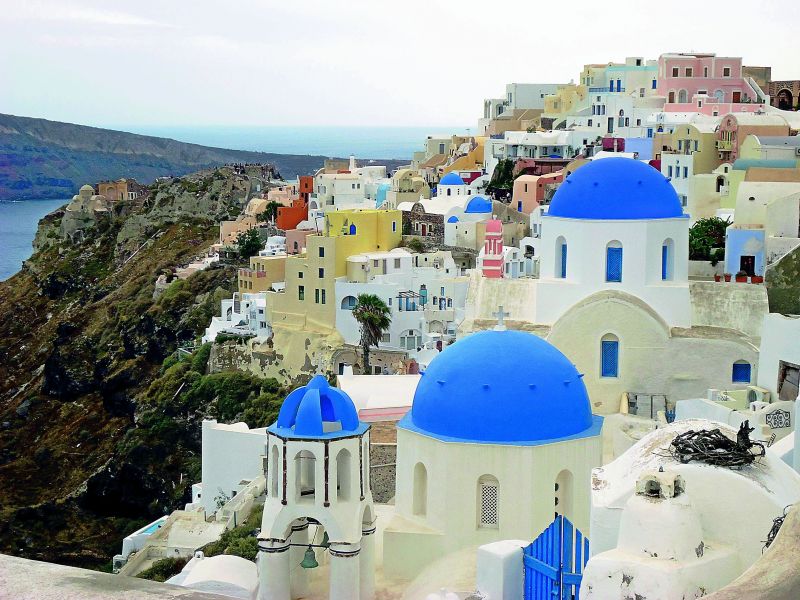 Is it possible that such a place does exist, you may well ask. It does. The island known as Santorini, created as a result of a massive volcanic eruption, is such an island. The volcano eruption, which wiped out the Minoans around 1650 BC, is responsible for the formation of Thira, as the island is known by the Greek.    Not just geographical distinction, Santorini also enjoys an interesting history. Originally used as a place for exiles by  the Romans, the island was a target of pirates for a long time till it was occupied by Venetians in the 13th Century and later by Turks. It finally managed to chase away the Turks in the early 1820s. The present structures came up only after the devastating earthquake that destroyed it in 1956. Even today, Fira has a population of just a little over 3,000. The tourists, during peak season, outnumber the residents. 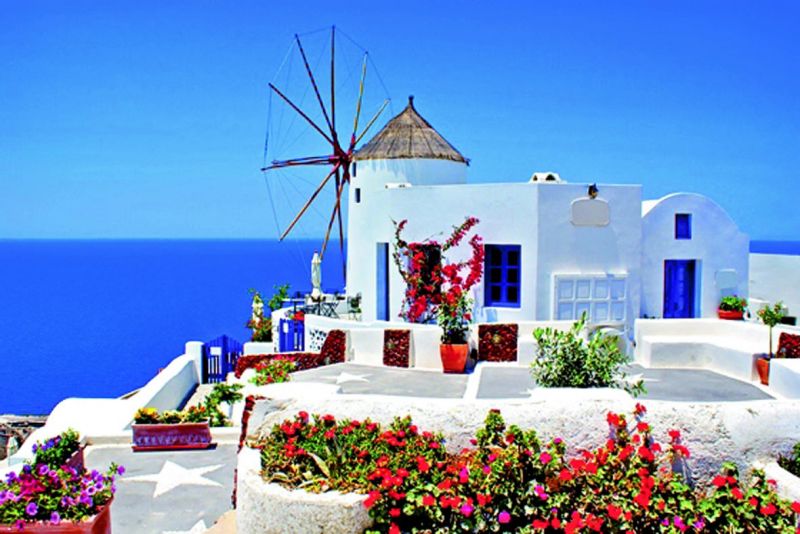 A host of fables pepper up interest in the place. Among them is the belief that the Atlantis once stood here till the volcano ruined everything. Although there is no validation of that claim, the islanders have named local wine as Atlantis.  A deep crater, known as caldera that kisses the feet of the surrounding cliffs, is also a result of the explosion that took place millions of years ago. It is the only peopled caldera in the world with several tiny towns perched atop its gigantic cliffs. Thira, as it is known by the Greek, is a beauteous island in the Aegean Sea and this was the place we had chosen to spend a week at. The crescent shaped island is known as the Black Pearl of the Aegean. The capital of Santorini, Fira, is also the place where most tourists dock in the first phase of their visit to the island. It is a town with breathtakingly beautiful white washed houses spilling down the craggy rocks. 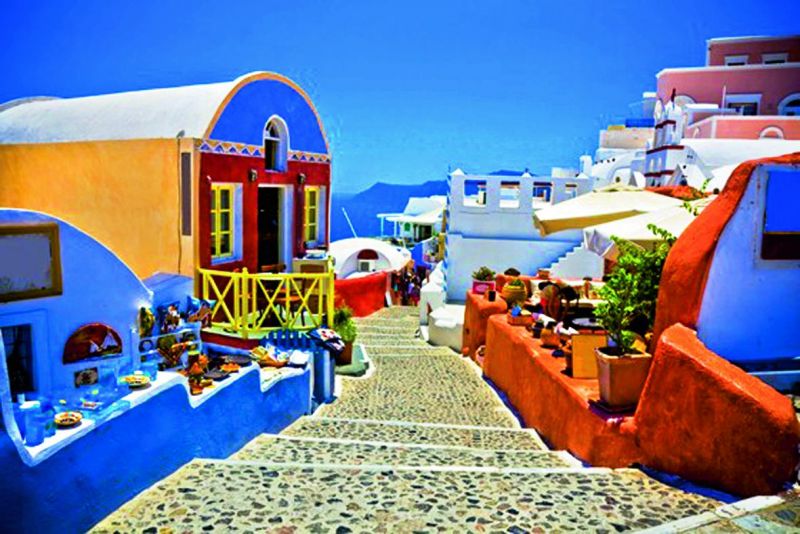 According to a local guide, the houses were whitewashed to disinfect them in the 20th century when diseases like cholera plagued the Greek islands, and since then they have been painted white. Before that they were painted in dark colours to match the rocks. This was done to avoid being spotted by pirates.  It was a perfect June evening when we disembarked at the port sited at the bottom of the island. While travelling toward Fira, the town that sits on the rim of the spent volcano, Nicolas, our driver, gave us a weather update in broken English. That was the first encounter with the hospitality of the islanders. Thereafter, almost every restaurant would greet us with a namaste. The waiters seemed to have honed the art of identifying the nationalities of visitors and also picked up a smattering of most languages. It did go a long way in making their customers feel welcome. 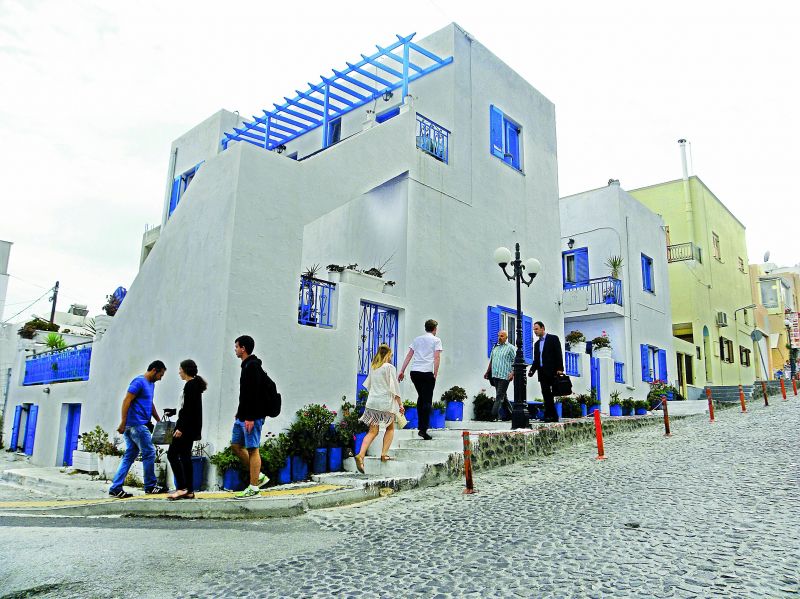 More than 400 churches and 40 jewellery shops, most of them tiny and quaint, dot the island. These along with the dazzling sunset constitute the island’s appeal. The alluring town with its blinding white and cobalt blue houses lining narrow and winding streets is an artist’s delight. Little wonder that poets, painters and musicians have eulogised it in their creative works. The markets were ablaze with colourful souvenirs, painted tiles and other artifacts. Cute stuffed donkeys lined almost all shops. Not surprising since the animal is still used as a beast of burden for the tourists. It is far easier for donkeys to navigate the narrow, winding and steep streets of Fira.

Donkeys have been the breadwinners for many in the town. There are two ways to reach the top of the caldera for a picturesque view.  While a sturdy pair of legs could climb the 587 steep steps, a donkey ride will definitely prove a lesser ordeal, guides are likely to warn.   During the evenings, visitors throng the cafes that promise great view of the caldera, eager for a glimpse of the setting sun. There is nothing more spectacular than the view of sunset from the island. The sighs and exclamations as the sun is swallowed by the sea is a testimony to that fact.

If Fira is so enchanting, we wondered about the charms of Oia, which is described as a beautiful painting. The portrayal turned out to be true. Incredibly lovely churches, narrow alleys running along the volcano ridge, whitewashed houses with colourful entrances, atmospheric cafes and a brilliant sunset add to the beauty of the place. Add to that a bakery that offers the best chocolate mousse and it is easy to figure out why tourists flock there. Santorini boasts of several beaches, some of them with different coloured sands. There are white, red beaches and the popular Kamari beach with black sand. Dramatic cliffs that rise from the beaches make them unique.  Also worth a visit are the famous ruins of Akrotiri, with its well preserved Minoan remains that date back to  pre-historic time.

Reaching Santorini: There are many airlines that connect the major Indian cities to Athens.  You can take a short flight from Athens or catch a ferry from Athens’ Piraeus port. While the flight will take under an hour, the ferry would take 10 hours and a hydrofoil (costlier than ferry) would take about half that time.

Stay: Fira offers a wide range of options from B&B to service apartments to expensive hotels. The thumb rule is that the better the view the more expensive the place. Oia is a more costly option.

Food: There are several local delicacies that must be sampled. The fava, which is a variety of yellow peas, keftedes are like koftas made of tomatoes, spinach or some other item (Santorini is famous for its cherry tomatoes), dolmades are stuffed vine leaves, gyros are skewered and roasted mince, moussaka and the famous Greek salad are a must-eat. Ouzo is the local wine. A word of caution — the prices are in direct proportion to the location of the restaurant. The better the view the more costly the fare.

Going around the island: The best option is to hire an ATV or a motorcycle. There is a frequent bus service between Fira and Oia.

Excursions: Take boat rides to Nea Kameni, which is a volcanic island and Palia Kameni that boasts of hot springs.