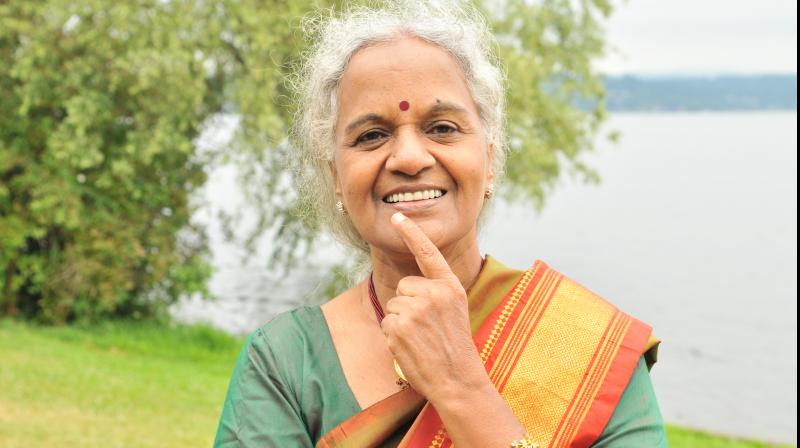 Following the end of the Sino-Indian war of 1962, which cost India about 13,454 soldiers, a song Aye Mere Watan Ke Logo caused a wave of patriotism across the nation. Every young man and woman wanted to join the Indian defence forces upon hearing the song that commemorated Indian soldiers who died during the war, among them is India’s first woman Air marshal Dr Padmavathy Bandopadhyay. Having joined the Indian Air Force (IAF) in 1968, she is the second woman in the Indian armed forces to be promoted to a three-star rank and to be conferred with the highest degree of armed forces awards, including the Param Vishisht Seva, Ati Vishisht and Vishisht Seva Medals.

Today, the retired officer continues to give her medical and education services to underprivileged children of Eastern Uttar Pradesh, which led the Indian Government to award her India’s highest civilian honour — the Padma Shri. Bandopadhyay is the first defence officer to receive a civilian award in India as armed forces are not eligible for civilian honours. “I am humbled to receive this award. It’s very rare that a defence officer gets a civilian award, but I think this is not for the work of one or two days, but of the lifetime,” says Bandopadhyay, who was also a medical officer during the Indo-Pakistan War of 1971. “I was at the border and became a senior officer to control and command the team. I was really working in the field providing medicines and manpower during that war,” she recalls.

Rising from the ashes

Hailing from a middle-class Tamil family from Tirupati, it wasn’t easy for Bandopadhyay to break the glass ceiling. At the age of three, she learnt to cope up with her ailing mother until the age of 13. “I would only cook rice, my father taught me that. I never saw a beautiful childhood. My mother wasn’t well and she had to be treated only by a Tamil Brahmin lady doctor for my family was conservative,” she rues, adding that her family later shifted to Delhi where her mother was treated and put back on her feet. “I was treated like a princes. I would not do anything and just study, but that too was difficult in Delhi because I only studied Tamil and Sanskrit, so Hindi and English weren’t my languages,” she reveals.

It was after she cleared the 10th standard board examination that she decided to become a doctor, but she had no idea of the procedure. “I found one college but without fail I would stand outside the classroom every day because I didn’t know English,” she laughs, adding that one of her teachers from the college taught her English after which she, “Topped the medical entrance exam and did well in the college too.”

Back in the 60s when Bandopadhyay became a doctor, her male friends in the neighbourhood joined the Indian Army, which subsequently changed the course of her life. “No boy came back after the war. That was the saddest part of my life — to see my own people leaving and never coming back — and then the song Aye Mere Watan Ke Logo came. I immediately told my father that I want to join the Indian Army. I didn’t even know the difference between the three armed forces then,” she recalls.

However, becoming an officer wasn’t an easy task. At the time when very few women would think of joining defence forces, Military Nursing Service (MNS) was the only option for her. “But you can’t get married. If you do, then you have to leave the force. Then I learnt about Armed Forces Medical College (AFMC) in Pune. The best part was they gave stipend as well,” she laughs.

With no background of physics, maths, and science and no family background in the defence forces, Bandopadhyay not only became a doctor but also successfully completed her training as a medical officer of the armed forces. “When I was asked which force (Army, Navy or Air force) I want to join, I thought I would fly a plane if I join the Air Force, so I said I want to do that. Later, I learnt that not everyone in the Air Force is a pilot,” she chuckles.

An aviation medicine specialist, Bandopadhyay, in her 37 years of service worked for the betterment of armed forces. She has done high altitude and aeromedical research which is path-breaking for the soldiers in adverse conditions. “Whatever I did in the service was for prevention and betterment of my fellow officers. With my research, I wanted to improve in medical facilities so that can lead to the efficiency of the armed forces,” she says.

While the entire country is rolling over discrimination towards women in defence forces, Bandopadhyay —  despite facing initial challenges of no maternity leaves and any casual leaves  — denies the notion of inequality.

“There is nothing like woman and man there. You are an officer. I was the first batch of women to join armed forces, there was no provision for maternity leaves, but I have managed my deliveries and children. Everything takes time to change,” she says, adding that one needs to prove the capabilities to be able to earn respect in forces. The former officer recalls an instance where male officers would not tell her their medical issues and at times they were rude too.

“Then my husband asked me to fly with them and I did that. It made a lot of difference, they were comfortable with me. When you wear the uniform you are an officer and not a man or a woman” she concludes.