The world’s first three-parent baby was born this year and other countries, without much oversight. 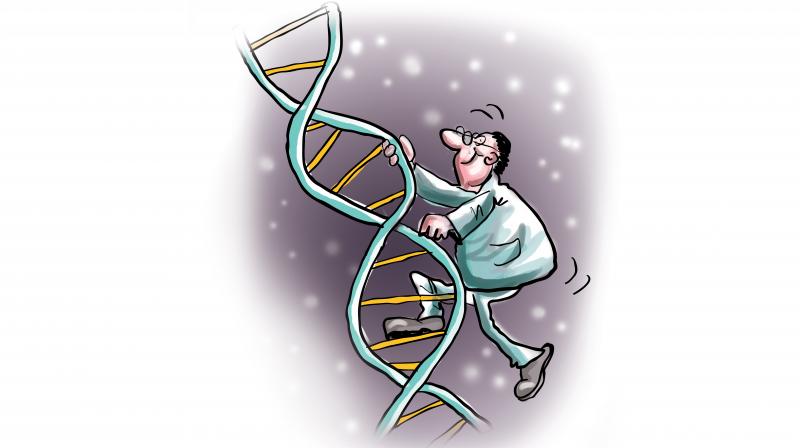 We are also at a critical point in the rapid development of “gene drive” technology.

The next year may represent our best chance to prevent the rise of a modern, uncontrolled and dangerously ill-considered techno-eugenics.

If new “gene editing” tools can be used to treat people who are sick, that would be a hugely welcome development. But applying them to human reproduction could all too easily open the door to a world of genetic haves and have-nots. Will it be possible for the distinction between responsible and irresponsible applications of human genetic technologies to hold, in policy and in practice? There is hope, but the signals from 2016 are very worrying.

One year ago, the U.S. National Academies Summit on Human Gene Editing ended with a consensus statement that proceeding with inheritable (germline) gene editing would be “irresponsible” until both the science was proven and there was “broad societal consensus about the appropriateness of the proposed application.”

It didn’t take long for that to seem wildly optimistic. Even before that announcement, and in complete secrecy, a rogue American scientist had defied authorities by using Mexican facilities to create a baby for a Jordanian couple using so-called “3-person IVF,” a risky experimental technique the U.S. does not allow. The child was born in April, and more are on the way, in Ukraine, China and soon the U.K.

Since that first baby is a boy, he won’t pass on the changes to his mitochondrial DNA (mothers do that). So we have not quite seen the first human germline intervention. If he is healthy — we have no peer-reviewed data at all — the effort may have been lucky: Some research suggests unpredictable but frequent complications. But the possibilities are very real, and very close. 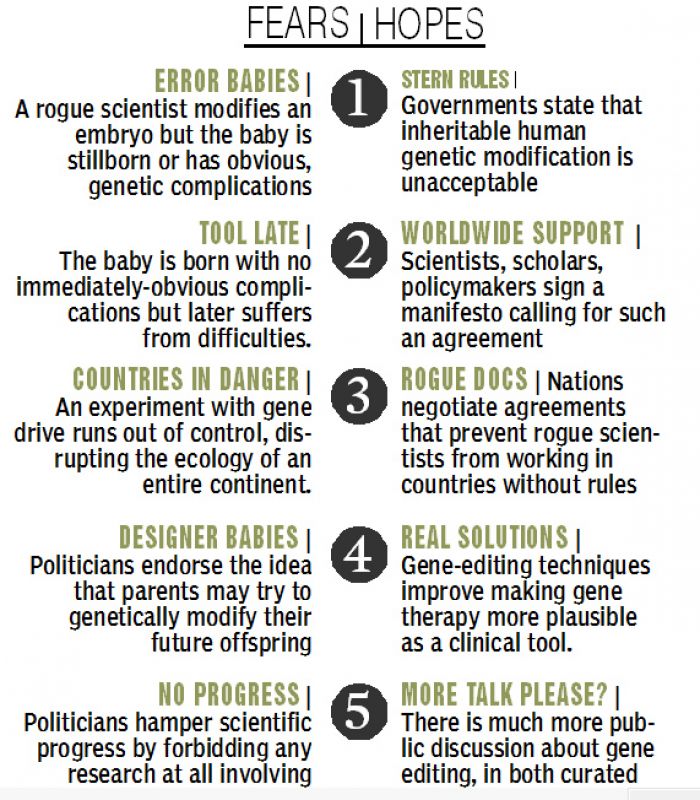 Meanwhile, the first experiments in gene editing the cells of a living human are already taking place, in China. That could lead to a medical breakthrough in gene therapy, or it could point the way to inheritable interventions.

We are also at a critical point in the rapid development of “gene drive” technology. With this, modified genes spread rapidly to take over entire populations of a species. The technology could even lead to weapons of mass destruction, according to James Clapper, the U.S. director of national intelligence. So far, calls for a moratorium have been rebuffed.

In the U.S., important scientists have been discussing what they call “HGP–Write”: a long-term effort to synthesize a complete human genome from scratch. That could lead to interesting science, but some of those involved are promoting far-fetched concepts such as “virus-free people”. Some also support making “more intelligent people” and applying other so-called “enhancements”.

Should we be worried? Yes, we certainly should, especially given the attitudes of the newly-elected President of the United States. Mr. Trump calls himself a “gene believer” who is “proud to have that German blood. There’s no question about it. Great stuff.”

This is the language of eugenics, as originally defined in 19th-century England, codified into law in California and other U.S. states, and brought to its ugliest culmination so far in Nazi Germany.

Will we get to that point? Let’s hope not. Opinion polls clearly show that significant majorities are more worried than enthusiastic about attempts at human enhancement for any reason, even including reducing risk of disease. Some 45 countries have already written laws prohibiting the use of genetic procedures to change the traits we hand down to future generations. Will the U.S., China and others join them?

The next year could be critical. We can choose — as a species — to reject the idea of remaking people and our environment. Or we can sit back and do nothing, and watch what happens. It is a scary time.

Meanwhile, the UK’s fertility regulator has given the green light to a treatment that will make it possible for babies to be made from two women and a man. The new advancement in in-vitro fertilisation has been developed by doctors in Newcastle. The first child to be born in the UK through the new method could arrive by the end of 2017.

The writer is a regular contributor to Biopolitical Times, the blog of the Center for Genetics and Society.