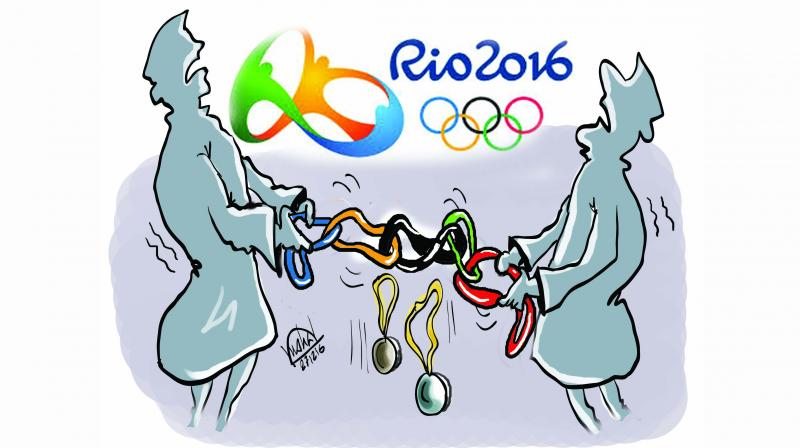 A throwback to the dispiriting days of the 80s appeared imminent as a medal continued to elude India at the Rio Olympics until the final few days.

A throwback to the dispiriting days of the 80s appeared imminent as a medal continued to elude India at the Rio Olympics until the final few days. Like an oasis, Sakshi Malik sprang up to end the drought with a bronze in wrestling. Then P.V. Sindhu went a step further as she clinched silver following a storming run that ended only at the hands of the redoubtable Carolina Marin. Although they didn’t reach the podium, gymnast Dipa Karmakar and archer Atanu Das deserve honourable mentions for their valiant Rio show. That Sakshi, Sindhu, Dipa and Atanu all competed in their maiden Olympics belied the durable Indian myth that athletes here mature late. Maybe, the reverse is true. Don’t be surprised if Sindhu goes all the way in the All England Championship in March at the ‘ripe’ age of 22. Crystal-gazing is a perilous business in sport as the name of the game is unpredictability. However, there is nothing wrong to suggest which way the wind might blow in 2017. Some Indian sports are yearning for hope after a dismal year while a few others are hoping to build on a promising year.

Cricket has ended the year on a high on the back of string of fine Tests. That they failed to win the World T20 at home earlier this year is now a distant memory. And, the talk of a bleak future in the wake of retirements of stalwarts such as Sachin Tendulkar, Rahul Dravid and V.V.S. Laxman has been consigned to the trash bin. The world is an oyster for Virat Kohli’s youthful brigade as another packed season appears on the horizon.

Sustained excellence overseas will cement the current team’s reputation among the best. It’s easier said than done but the likes of K.L. Rahul and Karun Nair might have different ideas. With ace spinner R. Ashwin showing no signs of leaving the pedestal, Indian cricket has never been on a safer wicket. That uncertainty is hovering over Indian cricket administration following the Lodha Panel recommendations and subsequent Supreme Court observations is entirely another matter. The murky waters should clear in 2017 as the apex court is all set to deliver its final verdict. 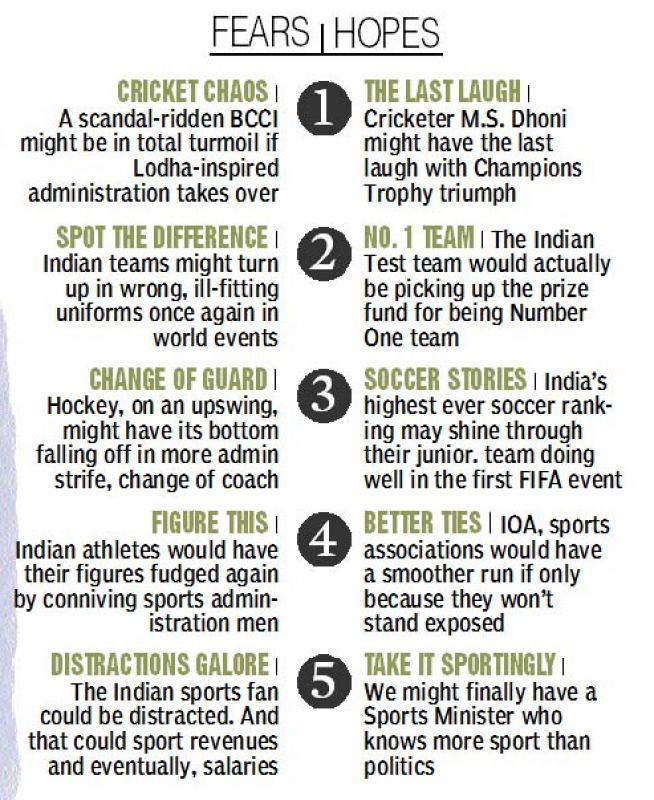 The despair that engulfed the Indian hockey team after it had blown a fantastic chance to nail a medal at the Olympics after 36 years has now given way to positive vibes. The sterling performance of the junior team that culminated in a gold at the World Cup on home soil bodes well for the future. And with an Indian at the helm of the international hockey federation, the atmosphere is propitious for the country to be among medals in events that matter most — the Olympics and the World Cup. The senior Indian team can give the game a mighty push in its spiritual home if they go on emulate the juniors at the World Cup in 2018.

But the performance of India’s athletic contingent was shambolic at Rio. They covered themselves in shame after a series of pathetic performances that bore no resemblance to their qualification marks. Indeed, many observers were left wondering whether Renjith Maheswary and Co. qualified for the Games fair and square in the first place. A root and branch investigation is needed to ensure that such skulduggery isn’t perpetrated on the unsuspecting Indian fan again. Maybe the flops must take a leaf out of the book of T. Mariyappan who won a Paralympic high jump gold after overcoming mountainous odds. Neeraj Chopra and Tejaswin Shankar, two athletes who weren’t part of the Rio contingent, represent India’s future in athletics, which is in dire need of heroes. In June, Neeraj became the first Indian to win a global crown with a javelin gold at the world U-20 championship with a record to boot. Shankar, a close friend of Neeraj’s, rewrote the 12-year-old national record in the high jump with a superlative 2.26 metres at the junior nationals in November. The Asian championship in 2017 would be a test of their character.

Indian football will welcome 2017 full of optimism, as the country is set to host a Fifa tournament for the first time. In addition to ensuring that the Fifa U-17 World Cup is conducted impeccably in October, the All India Football Federation has the onerous task of integrating the misfiring I-League and the promising Indian Super League. One successful professional league is imperative for Indian football to become relevant in Asia. Badminton and hockey are on the upswing and it’s time for football to follow suit. With no other major championship scheduled for 2017, Indian sports had better use the next 365 days for rebuilding and reformation.