2016 Fear vs Hope: Brexit and a now possible EU-calypse

The biggest shake-up in its 23-year-old history took the European Union completely by surprise. 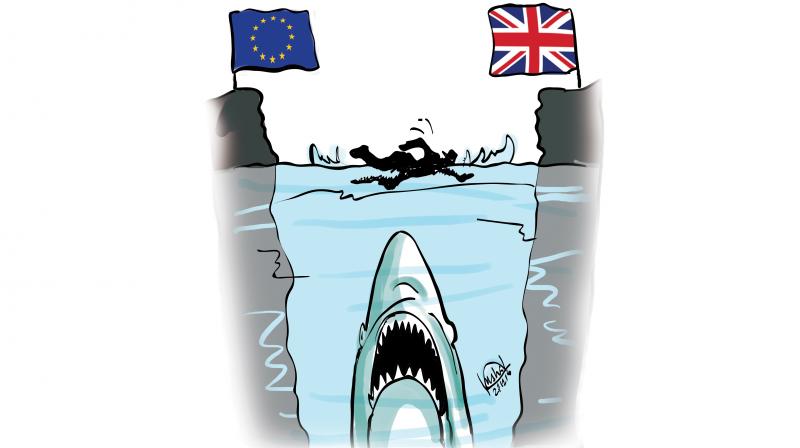 Demonetisation and President-elect Trump’s success in USA are cases of ‘first time ever’.

When UK joined the European Community in 1973 the latter had eight members and no project of closer union. After the Maastricht Treaty created the European Union, many members of the Conservative Party worried about the loss of British sovereignty, and resistance to the EU rose further with the Euro currency crisis and unchecked European immigration, attracted by the higher minimum wage, better welfare benefits and the English language, the second language in Europe. Prime Minister David Cameron agreed to a referendum to protect his party numbers; the referendum was essentially related to domestic politics.

With 44 per cent of its exports and 53 per cent of imports, the value of the European market to UK is obvious, and moreover Britain had negotiated several opt-outs from the EU, like a budget rebate, the Euro currency, Schengen visa-free travel and some legislation. But for Europe’s federal aspirations Britain was stumbling block, preferring security in a trans-Atlantic alliance.

Cameron’s referendum was lost to Brexiteers by 52 per cent to 48 per cent. And Brexit does not deal with British problems of health, ageing population, competitiveness and debt, or with EU’s problems of internal divisions on refugees, unemployment, and weakness in the Italian, Portuguese and Greek economies.

Britain is made up of four distinct nations; three with devolved powers. Northern Ireland and Scotland voted to remain, Wales and England to leave, split along geographical, generational and income lines. Prime Minister Theresa May has to negotiate with the devolved regions even before she takes on Brussels. Basically the UK wants to control immigration from Europe while retaining as much access to the common market as possible. The costs of remaining in the integrated market in a ‘soft option’ will mean contributing to the EU budget and accepting free movement of labour, but May wants a ‘bespoke deal’ uniquely for UK. A ‘hard exit’ will be easier by repealing the European Communities Act of 1972 as a starting point, but the Remainers in parliament, who number 75 percent, have their feet firmly on the brake pedal. Theresa May has no wish to be undermined by a Commons vote against Brexit, so takes her mandate solely from the referendum result. 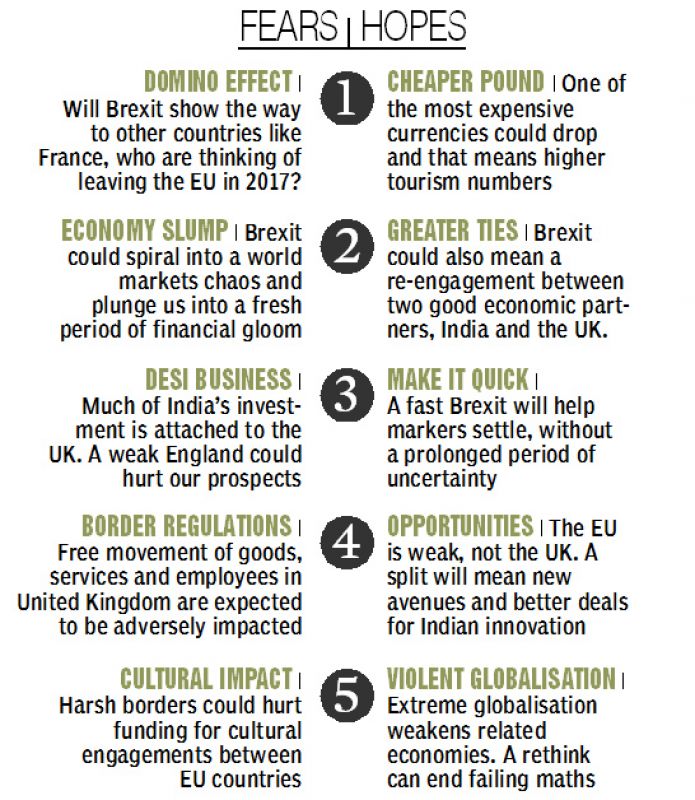 Mrs May has set March 2017 as the start date for the negotiations. Germany, France and Holland have elections next year, in each of which there is growing anti-EU sentiment. In fact, there are reports out there claiming the year 2017 will see a symbolic end of the European Union with Frexit already hitting headlines after far-right Marine Le Pen pledged t o hold a UK-like referendum in France. German too has warned that Netherlands, Austria, Finland and Hungary could leave the group. The collapse of such a massive economic bloc could have an impact worldwide — of unseen proportions. To outflank the rising influence of eurosceptics, EU officialdom wants to drive the hardest possible bargain with UK, which may argue for a transitional period of five years or more to conclude a Free Trade Agreement. If there is no FTA, UK will be in the same position as USA, India or China facing tariffs and non-tariff barriers.

Indian business is divided. Indian firms have invested heavily in the United Kingon and will face problems to access the common market. Relocation is something they definitely want to avoid. Others hope for a reduction in tariffs and non-tariff barriers with UK renouncing EU standards. Garment exporters, for example, who face an EU rate of nearly ten per cent, are anxious for a separate UK agreement.

Brexit, demonetisation and President-elect Trump’s success in USA are cases of ‘first time ever’. There is no road-map ahead; most of the narrative is about economic consequences that no one can anticipate. Trump’s election reveals the alienation of the underprivileged about economic inequality and having living standards eroded by globalisation. As with Britain, there is the concern that immigrants and outsourcing are taking away jobs from local citizens.

— The writer is a retired Indian diplomat, scholar, author, former Indian Foreign Secretary, and Deputy Secretary-General of the Commonwealth of Nations