2016 Fear vs Hope: An apprentice enters the White House

The scary thing about Trump’s politics is that more a falsehood is repeated, it is looked upon as being true. 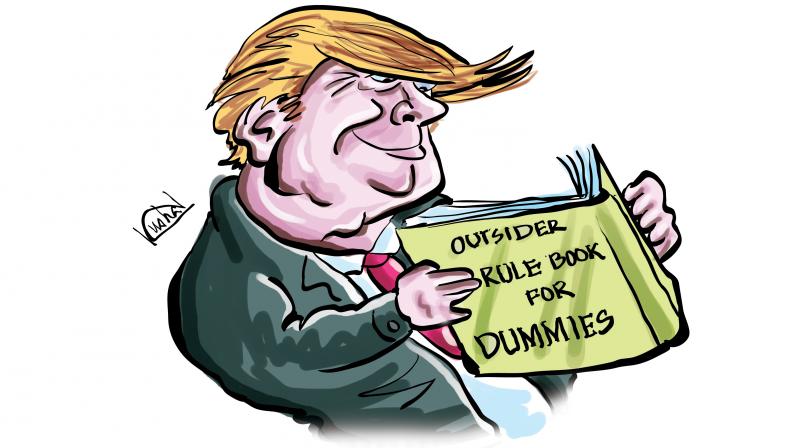 Despite all the fears, the hope is the American Dream will keep him too busy to disrupt the rest of the world, that the due processes of a vibrant democracy will not let a maverick run away with anything.

The mother of all political tsunamis has already made its impact. It wasn’t sighted in India right away as on the very day the Americans were choosing their leader, the Indian PM announced demonetisation. Trump dominated 2016 more than his Democratic rival in an abrasive campaign in which he raised the fear quotient multiple times with pronouncements likely to shake the world.

A sinister “it’ll be different from January 20’’ is symptomatic of everything that was dreadful about 2016 to drown out all hope of a maverick being reined in at the White House by his party — which, thanks to their candidate’s audacious statements about women, was renamed as “Grabbers Of P***y”. What is frightening about Trump is not what he knows or says — it is about what he does not know and what he will do based on what he is told by a group of so-called advisors. His tirade against Muslims and the illegals cannot be brushed off as a vote-catching gimmick for the short term because it holds out the prospect of destabilising the international system that has far reaching consequences beyond “fortress” America. The idea of creating an inventory of Muslims is as silly as it is naïve and dangerous. The same goes to extending the height of the wall on the border with Mexico! All that would pale if he sets off a nuclear race forcing the world to spend more on arming itself.

On the domestic front, it is not just throwing the Muslims and illegals (mostly Hispanic) out of the country, but in trying to fathom a culture based on one religion that America is not all about. This at a time when racial harmony in the United States is seen to be at an all-time low.

Trump is about to set in motion a process that threatens to turn vulgar campaign rhetoric into reality. Also, the scary thing about the politics of Trump is that the more a falsehood is repeated, it is looked upon as being true. The unemployment in the US cannot be laid at the doorstep of the H1-B or skilled visas. Yet somehow, this visa and with that all Indian companies that somehow “exploit” and “abuse” this process which the Trump Presidency is going to set right, seems to be the response. The tightened procedures on the H1-B visa in the past few years along with higher application fee are intended to offset the perceived drawbacks. But Trump and his advisers have to realise that the final call is made by American employers, not by India or Indian companies. Also, a sensible Trump administration will look at the H1-B visa in the framework of the more than 1,00,000 students from India that flock U.S. universities every year pumping billions into their economy. But the real turbulence in a Trump Presidency will be felt in the realm of international politics where ignorance and arrogance will come with a price. Trump’s conversation with the Prime Minister of Pakistan, Nawaz Sharif brings up the issue of terrorism and with this Islamabad’s function as the epicenter of global terror. Whether Trump and his advisors bring this about in full force or once again fall prey to Pakistan’s dilly dallying  remains to be seen. Terrorism aside, Trump has already rocked the China boat by talking to Taiwan and in the process hinting of a re-think in America’s One China Policy. 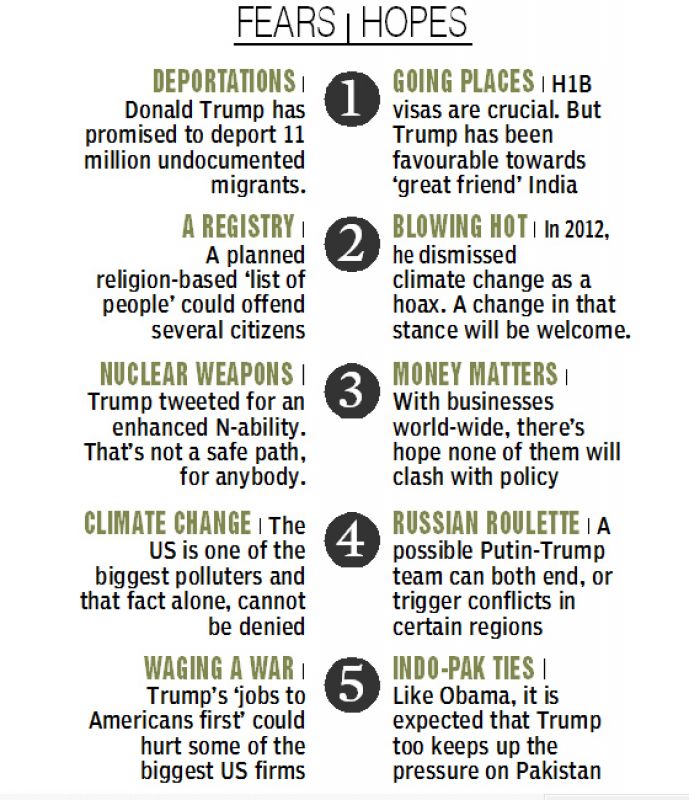 A Trump administration will also have to think about its Russia policy and if Putin is about to hang up his national interests to get on the good side of Trump — a hardly unlikely proposition at a time when Moscow is trying to regain its global power status in the aftermath of the erstwhile Soviet Union. Perhaps the most terrifying is the loose talk about nuclear weapons and in a thinking that allies in the Middle East and the Asia Pacific could be asked to be on their own.

As 2017 dawns on America and the rest of the world there is a cautious wish that problems of the world should not get any worse than they are today thanks to the person who will be stepping into the White House on January 20! Despite all the fears, the hope is the American Dream will keep him too busy to disrupt the rest of the world, that the due processes of a vibrant democracy will not let a maverick run away with anything. America will not become a tin pot dictatorship no matter what The Apprentice believes in the Trump supremacy.

(A former senior journalist in Washington between 1995 and 2008 covering North America and the United Nations, the author currently heads the Dept. of Journalism of SRM University and is Special Assistant to the Vice Chancellor)