The CBI, keeping with its tradition of making a mess of political cases, has bungled up the probe of what is arguably the biggest scam in history. 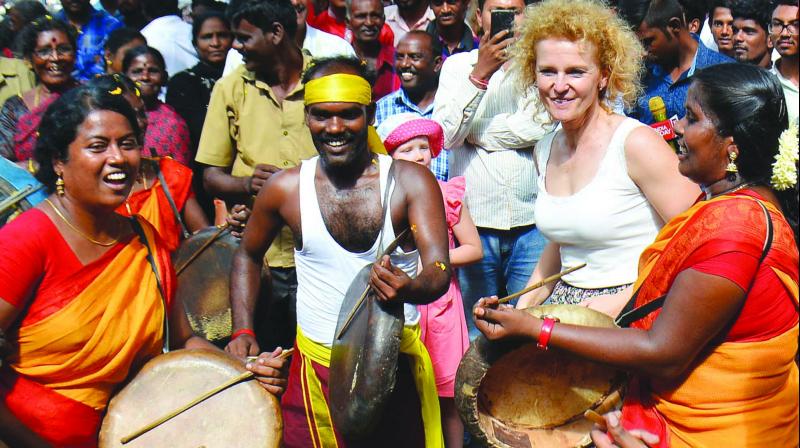 DMK supporters celebrate the acquittal of party leaders A. Raja and Kanimozhi in the 2G scam case in Chennai. (Photo: Asian Age)

The failings of India’s premier investigative agency stand exposed in full glory. The Central Bureau of Investigation (CBI) made a mess of what is arguably the biggest scam committed in recent history. It was not that the challenge before the agency was an easy one. It had to investigate and prosecute bureaucrats, ministers and corporate honchos whose net worth ran into thousands of crores.

Faulty Investigation
The first faults appear within the investigation itself. The judge has detailed as to how no progress was made in the case one year after its registration. Thereafter, the CBI pursued the matter at a great speed so as to create pressure on those being summoned. However, at a later stage the superintendent of police who was investigating the 2G case was deputed to look into Vyapam, and the 2G trial was left to an inspector rank officer.  Lastly, the most important witnesses were questioned right at the end — some just a week before filing of the chargesheet.

Contradictions
The second area of concern is the chargesheet, which the judge says is based upon “misreading, selective reading, non-reading and out of context reading of the official record”. According to the judge, the chargesheet is choreographed and contains factually incorrect statements like recommendation of finance secretary for revision of entry fee, amendments in Letter of Intent by A. Raja and Trai’s recommendation on revision of entry fee.

The CBI’s chargesheet on one hand claimed a loss of about Rs 22,000 crore, and on the other hand said that the government could have earned Rs 30,984.55 crore.

Deficient cross-exam
The third failure was in conducting the trial. The CBI did not cross-examine its own witnesses, even when they spoke contrary to what was on record. The conduct of its witnesses was shoddy and it appeared as if they were trying to hide more than tell. The cross-examination done by Central investigating agency of defence witnesses was absurd as it did not ask them about many important aspects. The special public prosecutor in spite of his assurance of giving written submissions argued the matter orally. He sought to submit submissions in writing only when the accused submitted their written submissions, as a result of which undue delay was caused.

Lack of coordination
The fourth failure as it appears from the judgment is the lack of synchronisation between the CBI, its prosecutor and special public prosecutor. The judge has stated that “in the beginning the prosecution showed great enthusiasm”, but “by the end, the quality of prosecution totally deteriorated and it became directionless and diffident”. The refusal of lawyers to sign any papers, and the same eventually being signed by an inspector did not look good. 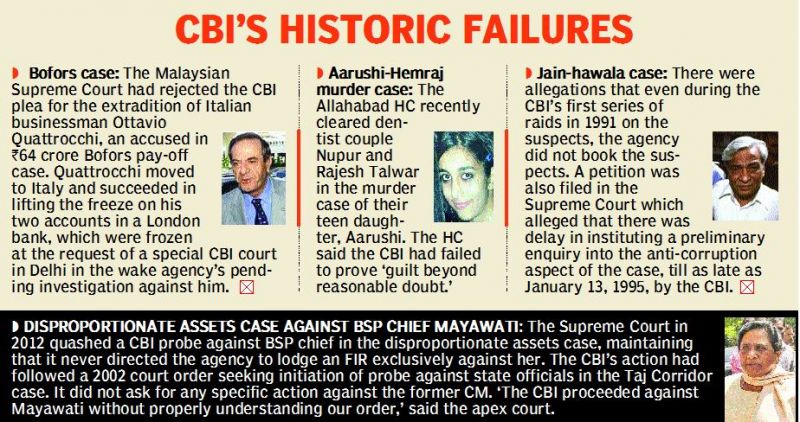 Complicated documentation
The CBI had also filed a supplementary chargesheet in the matter and yet it sought permission to file voluminous documents on multiple occasions. In an already complicated matter, where the world was after `1.76 lakh crore, thousands of pages by CBI were going to find no takers. The judge has observed that the documents in the case were difficult to understand. No one, including the officials who drafted the documents, knew the meaning of certain terms. The judgment records: “Notes have also been recorded on extreme margins of the note sheet, some of which have become frayed with the passage of time and cannot be read and understood properly. Non­understanding of the official notes by outside agency creates an impression of wrongdoing.” In a case that has a direct impact on the election results, have the case records been digitised?

The only saving grace
The sole point where the CBI was deligent was with respect to the question of sanction being required to prosecute R.K. Chandolia. The judge agreed with CBI that it is difficult to show direct flow of money in cases of political corruption, but as per the judge it made no change in the CBI’s obligation to prove its case beyond reasonable doubt. If the reasoning given in the 2G case is followed, it is going to spell doom for many CBI investigations, including the high-profile AgustaWestland case.

The CBI’s failure in handing the Hawala and Bofors cases is well known. The acquittal of Mayawati in the disproportionate assets cases shows that India’s premier agency does indeed become “a caged parrot” when it comes to pursuing political cases. The CBI also failed at the initial question of sanction to prosecute Maharashtra former chief minister Ashok Chavan in the Adarsh Society case. After A. Raja, former Union minister P.K. Thangunis was also acquitted by the CBI court as it found nothing against him in the 21-year-old housing scam. The CBI, famously, completely lost the plot in the Aarushi murder case where it had gone to the extent of planting a witness and tampering with evidence. The CBI had 817 pending cases in 2010, even as it registered 1,009 cases that year. The pendency has now grown to 1,369 cases, even as there has been no marked increase in cases registered this year.

It is clear that we have not seen the last of 2G. Seventeen accused will now face the challenge of appeals before the Delhi high court. The CBI may still ask for a de-novo (new) trial, seeking a chance to establish things afresh and restore its credibility. It is the Supreme Court that set the ball rolling. It’ll now probably decide where the buck stops.

The writer is an advocate in the Supreme Court