The constitutionality of MHA surveillance order

Nehaa Chaudhari
The author is Public Policy Lead at Ikigai Law, a technology focused law and policy firm based in New Delhi. Her Twitter handle is @nehaachaudhari

The rules require review committees to examine all surveillance orders issued under this section every couple of months. 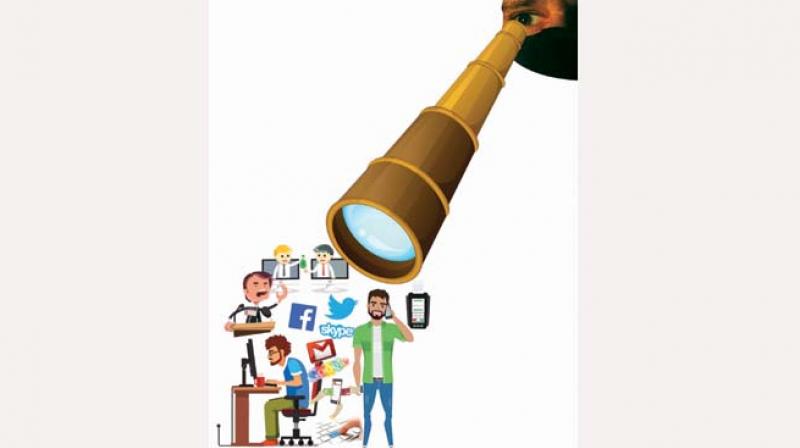 Section 69 empowers the Centre and all state governments to authorise any of their officers to surveil citizens’ electronic communications and information.

The MHA notification authorising 10 agencies to intercept, monitor and decrypt “any information” generated, transmitted, received or stored in “any computer” has kicked up a row. One section calls it electronic surveillance at the behest of the Big Brother. This time the qualitative difference is data stored anywhere, not just data in motion, can be intercepted.

Privacy is a fundamental right in India. Nine Supreme Court judges agreed on this in late August, last year. It is “the constitutional core of human dignity” and flows primarily from the “guarantee of life and personal liberty” of our Constitution, they said, in the case of K.S.Puttaswamy vs Union of India. This meant two rules for the Indian state. Rule number 1.) Do not intrude upon a citizen’s right to life and personal liberty; and rule number 2.) Take all necessary steps to safeguard individual privacy.

However, because no fundamental right is absolute, the Indian state is allowed to deviate from rule number 1 in certain situations. It can restrict individual privacy provided that it first fulfills three conditions: The restriction must be backed by law; it must be for a legitimate state aim; and, it must be proportionate.

All laws (including existing ones) and government actions, with consequences for individual privacy, must meet the three conditions listed above to be valid.

Those that fail to do so are unconstitutional, and must be suitably amended, or will be struck down, as was the case with Section 377 of the Indian Penal Code, earlier this year. Section 69 of the Information Technology Act, under which the Ministry of Home Affairs has issued its recent surveillance order, warrants similar scrutiny.

Section 69 empowers the Centre and all state governments to authorise any of their officers to surveil citizens’ electronic communications and information. They may do so for any of the reasons laid down in the same section, including India’s sovereignty, integrity, defence, security and foreign relations, or public order, or to prevent the incitement of certain offences, or to investigate any offence. Government orders issued under this section must be reasoned, and in writing. These orders, and the resultant surveillance activity, must follow the procedure laid down in a set of rules framed under the Information Technology Act in 2009. The rules require review committees to examine all surveillance orders issued under this section every couple of months. The review committee at the Centre examines the Union government’s surveillance orders, while state governments’ orders are examined by committees at their respective states. But, review committees, whether at the Centre, or at any of the states, only have
three members each, tasked with reviewing hundreds of orders every day. Moreover, they consist only of government officials. Neither the Information Technology Act, nor the accompanying 2009 rules, require Parliamentary or judicial oversight of electronic surveillance by the executive.

In the past week, at least two petitions have been filed before the Supreme Court,which claim that the MHA’s surveillance order violates the fundamental right to privacy and is unconstitutional. This order for electronic surveillance is a clear deviation from rule number 1, and so the question before the court will be if it meets each of the conditions above to be valid.

Is the MHA order pursuant to a legitimate state aim? The order itself does not specify what in particular the government hopes to achieve. However, given as it was issued under Section 69, the government could well argue that it was only for the six purposes laid down in the statute.

Moreover, according to the Supreme Court in the right to privacy judgment, legitimate state aims are “matters of policy to be considered by the Union government.” The court even offered examples of possible legitimate state aims, which included the grounds listed under Section 69.

Is the MHA order proportionate? No; and neither is the IT Act’s framework dealing with electronic surveillance. The IT Act allows government surveillance of citizens, unchecked by either the legislature, or the judiciary. It creates a scenario where tiny government committees must review the government’s own decisions to curtail citizens’ fundamental rights. Moreover, it penalises individuals with up to seven years in jail, in addition to fines, for not complying with any interception, monitoring, or decryption request by an authorised government agency.

In light of the recent MHA order, this means that individuals must comply with surveillance requests by 10 government agencies including tax authorities, the police, and civil and military intelligence agencies, or be prepared to face jail time. This is unethical, undemocratic, and unconstitutional.

Unchecked government surveillance threatens not just an individual’s fundamental right to privacy, but also her fundamental freedoms of speech, movement, and assembly among others, also guaranteed fundamental rights under the Indian Constitution.

These rights and freedoms are the very essence of what it means to be a free citizen in a modern democracy. A democratic state must only exercise its police powers in the narrowest of circumstances, within bright lines, clearly defined.

In August, 2017, the Supreme Court laid down the framework to identify these narrow circumstances and bright lines in so far as the fundamental right to privacy was concerned. But, the promise of Puttaswamy is only as good as its implementation, and here lies its biggest challenge.

As Pranesh Prakash, Fellow at the Centre for Internet and Society, said on a television channel recently, perhaps it is about time that we stopped relying solely on the courts to step in to safeguard our fundamental rights, and started demanding that our elected law-markers did their jobs, or did them better. After all, a general election is but a few months away.