China sets its eyes on Doklam and beyond

Thirty years of reform catapulted China to the second largest economy and wetted its sense of lebensraum. 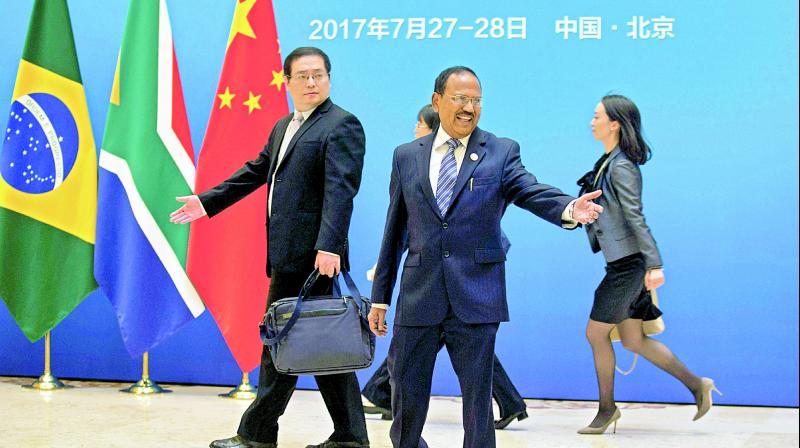 National Security Adviser Ajit Doval at the Diaoyutai state guesthouse in Beijing where he attended a BRICS NSA meet amidst Sikkim standoff.

The standoff between the armies of India and China at the trijunction with Bhutan and the war of words unleashed by Beijing suggests to a long-term preparation in the making not just for this sector but across China’s borders with other countries. The tussle at the tri-junction goes beyond the 89 square kilometres of territory to the larger leadership issues in Asia and beyond.

Ever since President Xi Jinping took over the reins at the 18th Communist Party Congress in 2012, the leadership adopted policies different from the ones followed by Deng Xiaoping from 1978 onwards.

Deng suggested, against the backdrop of the chaotic situation in the country following the Cultural Revolution and the Gang of Four that the country needs to emphasise on reform and opening up and enhance material capabilities. Thus was born the slogan of “keeping a low profile” [tao guang yang hui]. Thirty years of reform catapulted China to the second largest economy and wetted its sense of lebensraum.

As China became the largest trading partner for over 130 countries, scholars like Yan Xuetong suggested that China revive the Middle Kingdom and its attendant dependencies such as vassal states. By 2012, Mr Jinping announced “rejuvenation” of the country with a road map to observe “two centennials” — the first hundredth anniversary of the birth of the Communist Party in 2021 and that of the People’s Republic in 2049. Thus began the revival of the strategic policy of the country from “low profile” to that of “accomplishing something” [fenfa youwei].

As a follow up, China began imposing its version of the Monroe Doctrine on its neighbouring countries even as it began preparations for Belt and Road Initiative of connecting regions in Asia, Europe and Africa.

China began “evicting” the United States from the region with the USS Impeccable incident in 2009 when the American naval ship was nudged outside the South China Sea.

At the same time, China began expanding its claims in East China Sea on Senkaku Islands with Japan and in South China Sea with Vietnam, the Philippines and other countries.

China has also deployed all other skills in maximizing its outreach. China’s charm offensive towards South-East Asian countries, specifically the Philippines, against the backdrop of The Hague tribunal verdict on the South China Sea islands is instructive in this regard.

The Middle Kingdom of the yore considered the Korean Peninsula and South-East Asia as its primary area of influence with many states paying tributes. While China since joining the United Nations in 1971 suggests that it abides by the Westphalian world order of equality of nation-states in the UN and sanctity of the individual member-states, a new streak is visible in this recent revival of the Middle Kingdom.

The Doklam issue as well represents this urge to impose the Middle Kingdom across the region. Clearly, China has been expanding the envelope in Asia and beyond and Doklam incident is another “new normal” of late. More such border probing missions and military roads or other forms of soft or hard infrastructure are expected across the Line of Actual Control with India in the near future. Likely areas of friction include Daulat Begh Oldi, Trig Heights, Pangongtso Lake, Chumar, Demchok, Samar-lungpa and other areas in the western sector of the border, while in eastern sector near Aruncahal Pradesh more Chinese probing missions are possible at Asaphila, Migyitun, Samdurongchu, Changtze and Fish Tails.

President Xi raised the bar in 2012 by suggesting that China should not sacrifice “core interests” (including perceived sovereignty claims) for the sake of “developmental interests” (that is trade, investments, etc). Today against the backdrop of the factional struggles before the 19th Communist Party Congress later this year, “core interests” have again become competitive propositions in garnering more seats in the Politburo.

Any aspiring leader in the next Politburo will be seen as not defending enough recent China’s positions at Doklam could be castigated as another Li Hongzhang, the Qing imperial commissioner who signed the treaty with Japan after China’s defeat in 1895 and gave up the Korean Peninsula and Taiwan.

Mr Xi alluded to guarding against such “loss of territories” as recently as in his meeting with Taiwanese opposition Kuomi-ntang leader Hong Hsiu-chiu in November 2016.

The charged media coverage on Doklam has also spawned intense nationalist rhetoric in China. While China’s ratcheting up on the disputed islands of Senkaku and South China Sea and missile defence deployment in South Korea had pitched the Chinese public against Japan, Vietnam and the Philippines and South Korea, a similar effort in the case of Doklam has fortunately not triggered street-side protests in China and against India or Indians, although such controlled activity cannot be ruled out in the near future.

This may be partly because while Japan has over 80,000 companies investing in China compared to a paltry 200 Indian firms. Also, other economic inter-dependence indicators between India and China — trade, investments, tourism and others — are relatively low as compared with other regions. However, this scenario may not last long due to globalisation and so India may also have to be prepared on this front as well in the future.

As China’s ambitions have been tickled with its double digit growth rates (although declining of late) and is currently being exhibited in leadership tussle with other nations across Asia and beyond, a concert of these countries is necessary to restore peace and stability. China’s imposition of any Middle Kingdom over Asia is anathema to the 21st century dynamics. India is well poised to take the initiative in restoring the much- needed balance in the region.