Marching to a new drumbeat: What to expect from Budget

Budget FY2020 should break this dismal trend and increase capital expenditure to 2 per cent of projected GDP. 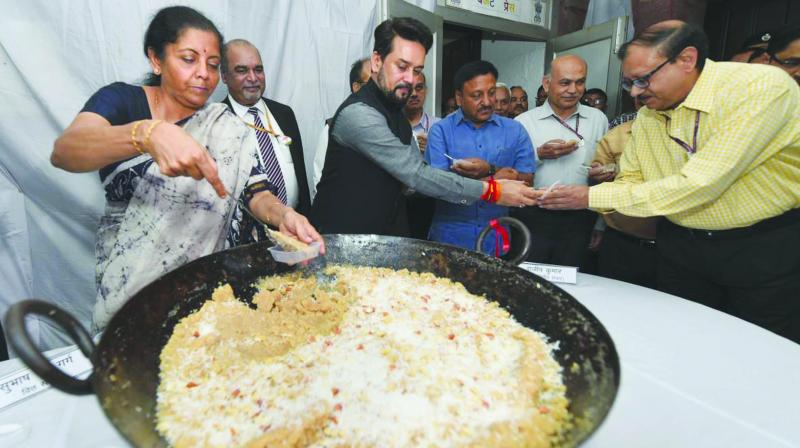 Union finance minister Nirmala Sitharaman and MoS Anurag Thakur distribute halwa to officials during the “halwa ceremony” to mark the beginning of the printing of budgetary documents in New Delhi. (Photo: PTI)

Budget FY2020 will be assessed on its transparent accounting for macro-economic stability indicators and substitution of political largesse with purposeful, growth oriented allocations, within a medium term framework.

Modi 1.0 was all about learning the ropes of national governance. Budget preparation and execution is a key ingredient. Budget purists cavil that budgets under Modi 1.0 were high on fuzzy motherhood goals and discretionary expenditure but low on schematic, multiplier enhancing allocations.

Rhetorical and poetry are part of the theatre of budget presentation. But the five budgets presented by Arun Jaitley as finance minister from July 2014 to February 2018 were far from lacking substance.

Landmark decisions abounded — implementing the enhanced, untied devolutions to states, recommended by the 14th Finance Commission; abolishing the Planning Commission and it’s centralised allocations; nudging the GST council towards implementation of the GST in 2017; implementing the Indian Bankruptcy Code to recognise, resolve and recover stressed assets of banks — Rs 3 trillion out of Rs 12 trillion; partial recapitalisation of publicly owned banks via an allocation of Rs 2.6 trillion.

Opening 340 million bank accounts for the financially excluded laid the foundation for targeting subsidies via the direct transfer of benefits. A variety of disability and health protection insurance and pension schemes were unleashed including the flagship medical insurance scheme — Ayushman Bharat. Continuous rationalisation of GST rates and processes stabilised business, as did reduced tax on income for the neo middle class and on profits of small business and corporates up to a turnover of `2.5 billion.

Fiscal consolidation was continued. Fiscal deficit (FD) — the difference between current revenue and total expenditure — decreased from 4.1 per cent in the Interim Budget FY2015 to 3.4 per cent in FY2018.

Sadly, these gains were reversed thereafter. FD reverted to around 4 per cent of GDP, if shorn of clever but unsustainable accounting. The medium term target is 2.5 per cent by 2023 — a level last achieved in FY2008.

The revenue deficit (RD) — the difference between current revenue and current expenditure (excluding capital), reduced from 2.9 per cent of GDP in FY2015 to 2.1 per cent in FY 2017 on the back of falling crude prices. A sharp crude price increase in FY 2018 and implementation of the 7th Pay Commission increased RD to 2.6. Thereafter it stagnated at 2.2 per cent of GDP versus the medium term target of 0.8 per cent by 2023. A revenue surplus of 0.9 per cent was last achieved in FY2008.

Inflation targeting to keep it below 4 per cent per year has been a spectacular success for which the government and Monetary Committee mechanism of the RBI deserve credit.

What eluded Modi 1.0 was ramping up investment sufficiently.

Government capital expenditure has varied between 1.6 and 1.8 per cent of current GDP since FY2014, the final year of the United Progressive Alliance II government.

Budget FY2020 should break this dismal trend and increase capital expenditure to 2 per cent of projected GDP. Growth was 6.4 per cent and just 5.8 per cent in the last quarter of FY2019. Increasing the outlay for capital investment signals the commitment of Modi 2.0 to growth. Taking on more debt is not the answer. The Union government debt in FY2018 was 46.5 per cent versus the target of 40 per cent of GDP.

Squeeze revenue expenditure is necessary though it is inconvenient. Maharashtra, Haryana, Jharkhand and Delhi elections loom in FY2020 followed by Bihar in FY2021. Election promises like the new PM Kisan Samaan scheme cost Rs 750 billion. Unconventionally, it was enlarged prior to the budget, to benefit all kisans not just the small and marginal kisans. Unfairly, the poorer but more entrepreneurial tenant farmers remain excluded.

A new scholarship scheme for 50 million students from minority communities was announced, just three weeks prior to the budget.

Admittedly, it is a welcome gesture to include Muslims who are the most affected by election related violence. But will these new revenue allocations nudge out less deserving ones or add to the fiscal stress?

Public dis-saving, as reflected in the RD since FY2008, retards all investment. Government borrowing funded only one third or `3.2 trillion of aggregate public investment — including PSUs — of `9.6 trillion in FY2019. But ballooning PSU borrowing to fund core investment “crowds out” the private sector or increases its cost of borrowing.

Private domestic investment can fill the gap quicker and without straining fiscal stability. But stressed bank balance sheets constrain private borrowing. Will budget FY2020 announce a programme to reform publicly owned banks and recapitalise them quickly, funded by receipt of an enhanced share in RBI reserves of `1 trillion, which the Bimal Jalan Committee is likely to endorse?

Alternatively, the RBI could reduce the onerous cash reserve (4 per cent) and liquidity reserve (19 per cent) ratios which immobilise 24 per cent of bank liquidity, at least for the better performing public and private banks. China, admittedly a fiscally more endowed economy, has reduced reserve ratios to just 11 per cent.

Faltering merchandise (goods) exports is a concern. Merchandise exports declined from $318 billion in FY2014 to a low of $260 billion in FY2016 before reviving to $330 billion last year. Boosting exports is a sustainable way towards a stable INR – an ideological preference for the BJP. Allowing 100 per cent FDI in multi brand retail – an option minister for commerce Piyush Goyal has rejected — conditional on export and local employment commitments can incentivise exports.

A “Council for Rural Development”, on the pattern of the GST Council, can develop consensus around liberalising domestic markets for agriculture — a state subject.

India is in a sour spot. A trade-off is necessary between increasing investments for growth or pursuing fairer income distribution and welfare. Modi 1.0 chose the latter. But the outlay (Interim Budget) on health, education and social welfare (HESW) is just 1 per cent of GDP in FY2020. Doubling it can enhance institutional capacity to improve the quality of these services. But only growth can assure additional fiscal capacity for enhanced welfare and new jobs — the best option for sustainable income enhancement with social harmony.

Purposeful re-prioritisation and cuts of 10 to 15 per cent, excluding for HESW, interest payment and grants for state governments, can squeeze revenue expenditure by 1 per cent of GDP in FY2020.

Freezing it in FY2021 will create additional fiscal space of 2 per cent of GDP— a reduction in public borrowing of `6 trillion over two years.

Budget FY2020 will be assessed on its transparent accounting for macro-economic stability indicators and substitution of political largesse with purposeful, growth oriented allocations, within a medium term framework. Modi 1.0 swept citizens off their feet — time for reality now.