Death by water: Anatomy of a disater

The contention of ecologists, including myself, is that damages to ecology will exacerbate the fallout from natural disasters. 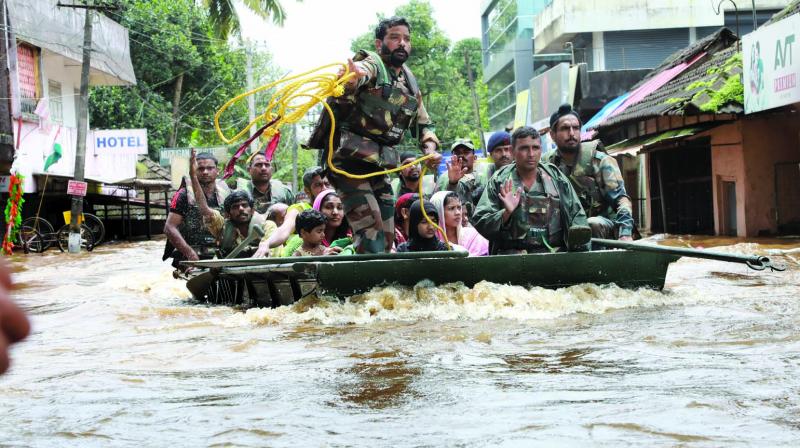 For Kerala, it is the forest, river and sea all together in a falling gradient pitted against rising demographic density that has led to the once-in-a-century floods that caused widespread damage in the state.

The recognition of Western Ghats as a unique ecological system is a universally acknowledged reality. The Western Ghats Expert Ecology Panel (WGEEP) Report is part of the long history of discourses on preservation of this unique habitat covering six states in the country. The very mandate of WGEEP, constituted to assess the current status of ecology of the region and suggest remedial measures in 2010, is an indication of the urgency of the matter. The government was forced to constitute such a panel as the ecology of the region had reached a tipping point with severe deleterious impacts on the livelihood of the most deprived sections of society such as the members of the indigenous communities and an invaluable ecological heritage of the world.

The WGEEP report is a blueprint bringing an ecologically sensitive paradigm for all activities in the region. Unfortunately, vested interests in the government and outside successfully managed to scuttle the implementation of recommendations of the panel to continue with their nefarious activities.

The question why a devastating  flood took place in the erstwhile princely state of Travancore in 1924 when the hill ranges on the Kerala side of the Western Ghats were relatively unspoiled has to be addressed in a wider perspective. People working in the areas of ecology and climate change with a scientific bend of mind are approaching these issues with a long-term perspective and making their projections after collating data from various sources. It is not my contention that floods or other natural calamities are caused solely due to damages to ecology. I am sure that no sane ecologist holds such a view. The contention of ecologists, including myself, is that damages to ecology will exacerbate the fallout from natural disasters.

The widespread death and destruction during the Kerala floods recently are a clear pointer towards the ecologically unsustainable development trajectory followed in the Ghats as well as midland and coastal regions in the state. The failure in management of water in the reservoirs acted as the major cause for the deluge. When I say failure in management of water in the dams I mean the need for a scientific and transparent database and systems and practices based on such a database. I have no hesitation to say that Kerala State Electricity Board Ltd (KSEBL), the custodian of most dams in the state, has no such a scientific culture. My experience with officials of KSEBL from the days of Silent Valley to Athirappally shows that they don’t have a scientific database that could be verified objectively for fixing the technical and economical feasibility of their projects. Any person with an iota of technical and financial wisdom will question the entire logic behind pushing a hydro-electric project such as Athirappally.

The widespread death and destruction during the unprecedented floods in Kerala have been largely due to such development policies. The stone quarrying and the unbridled constructions in the Ghats section are mostly illegal and in violation of even the existing laws. I feel that any person believing in the system of rule of law will be forced to question these activities. One need not be an ecologist to oppose such activities. The only way for Kerala to avoid such tragedies is to develop scientific data based on sound and well-meaning ecological principles in its social and economical policy formulation. The flood that engulfed the state in the current monsoon season is a clear warning that Kerala cannot afford to move ahead with the business as usual mode in future.

(Madhav Dhananjaya Gadgil is an ecologist and founder of the Centre for Ecological Sciences)As told to K.P. Sethunath