Barely 48 hours after the incident, the country's security apparatus, led by HM Rajnath Singh, conducted a major in-depth review of the incident. 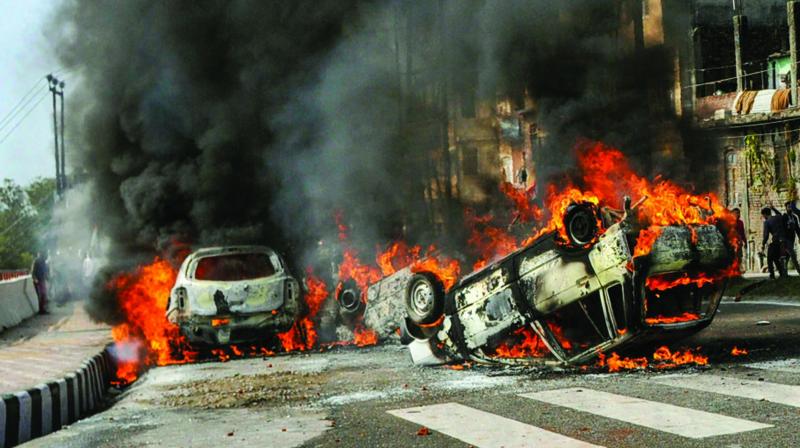 Jammu: Vehicles set on fire by protestors against the killing of CRPF personnel in the Pulwama terror attack.

The terror attack on February 14 in south Kashmir's Pulwama district has been a major eye-opener for security agencies in the Valley. According to experts, the manner in which a Jaish-e-Mohammed fidayeen managed to enter a CRPF convoy with a vehicle loaded with high intensity explosives and rammed it into a bus killing over 40 points towards major lapses and hence the urgent need for course correction.

This in effect means that security convoys from now on would be provided a safe passage and would move though a sanitised zone in the Valley. The second major step being taken by security agencies, sources added, in the region is to further strengthen their Road Opening Parties or teams and put check-points at strategic locations all along the route to be taken by security convoys.

As A.K. Upadhyay, a former DIG with CRPF, said many of the Standard Operating Procedures (SOPs) were already in place but with the passage of time even security personnel on the ground get a little careless. "Though some new initiatives are being taken most SOPs are already in place. The need is to enforce them more strictly," he added.

Another major initiative as announced by the force's director general, R.R. Bhatnagar, was that the CRPF from now on will further strengthen its anti-explosive teams with greater focus on neutralising Improvised Explosive Devices (IEDs).

However, the biggest announcement in wake of the attack came from the Union Home Ministry on Thursday when it extended the facility of free air travel to all security personnel of the Central Armed Police Forces along the Delhi-Srinagar, Jammu-Srinagar and Srinagar-Jammu sectors. Earlier, this facility was available only to security personnel of the rank of inspector and above. It has now been extended to all ranks.