Over five years ago, the then Prime Minister had called malnutrition in India a “national shame”. 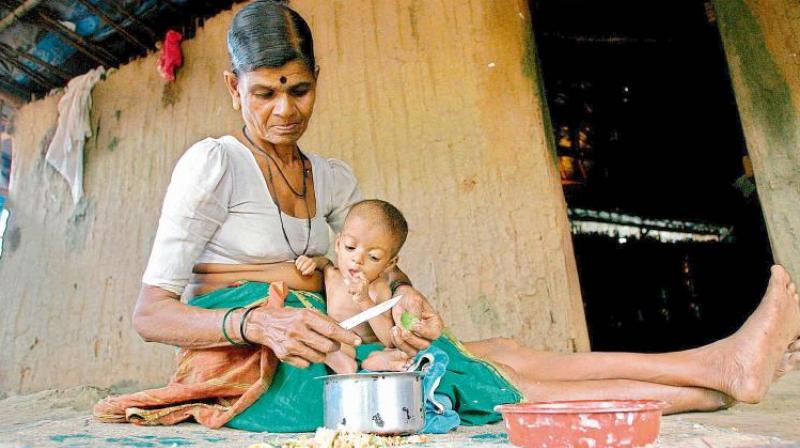 Over five years ago, the then Prime Minister had called malnutrition in India a “national shame”. It is unfortunate that the situation is still much the same, as revealed by the recent Global Hunger Index (GHI) according to which India ranks 100 out of 119 countries in terms of its level of hunger and under-nutrition.

While comparing the progress in ranks in the GHI is difficult, as the list of countries included as well as the methodology has changed over the years, the index itself is more comparable.

India’s GHI reduced from 46.2 in 1992 to 31.4 in 2017 (higher index indicates higher severity of hunger), indicating an improvement in the nutrition status in the country. But the pace is too slow. For instance, compare India with the two other countries that share the same rank and GHI in 2017, Djibouti and Rwanda. In 1992, Djibouti’s and Rwanda’s GHI scores were much higher at 60.3 and 53.3 respectively.

Closer home, India also ranks lower than other South Asian countries such as Bangladesh and Nepal that have much lower per capita incomes than that of India. Not only do they have better GHI scores, they also show faster improvement in the last 25 years. Bangladesh, for instance, shows an impressive decline in the GHI score from 53.6 in 1992 to 26.5 in 2017.

Addressing malnutrition requires intervention at multiple levels. The government has recently launched the National Nutrition Mission which promises a comprehensive approach to the problem of malnutrition and will put in place mechanisms for monitoring from the district to the national level. It will bring together all related departments especially Integrated Child Development Services (ICDS), National Health Mission (NHM) and Swachh Bharat Mission (SBM).

Such monitoring at the highest levels if done seriously can help in designing intervention better and ensuring progress. Along with this other departments such as agriculture, food, panchayati raj also needs to be involved. Such convergence and monitoring has been under discussion for many years now. It is hoped that the country will soon see some real action around this.

A number of steps are required for overcoming malnutrition. Improving women’s education, enhancing household food security through access to sustainable livelihoods, reducing open defecation are all important interventions that contribute to reduction in hunger and malnutrition.

The most important target groups to break the inter-generational cycle of malnutrition are adolescent girls, pregnant and lactating women (PW&LM) and children under two years of age. While there are various schemes, especially the ICDS, that address the health and nutrition of these groups, there are serious gaps in design and implementation. The ICDS provides food to all these groups under its supplementary nutrition programme (SNP). After more than five years, the expenditure norms for SNP have recently been enhanced to Rs 8 for children and Rs 9.50 for adolescent girls and PW&LM per day (from Rs 6 and Rs 7). These norms will now also be regularly updated to adjust for inflation.

While this announcement has been made, it is important that it is soon followed up with actual allocations. Along with increased expenditure, it is also important to strengthen the delivery mechanisms that the beneficiaries are provided diverse and nutritious foods in a decentralised manner.

Exclusive breastfeeding for the first six months is one of the crucial interventions to prevent malnutrition. Maternity entitlements are important not only to recognise women’s work but also as an enabling factor towards making exclusive breastfeeding possible. The Maternity Benefits Act, 1961 covers only women in the organised sector, while more than 90% of Indian women are in the informal sector. Recognising this gap, the National Food Security Act (NFSA) 2013 included an entitlement of (not less than) Rs 6,000 for PW&LM. More than three years after the Act was passed, the Government of India has finally notified a scheme for delivering this benefit — the Pradhan Mantri Matritva Vandana Yojana (PMMVY).

Although this scheme was a result of the Prime Minister’s announcement on December 31, 2016, it is yet to be implemented on the ground. Further, the scheme is a truncated version of what the Act promises, covering only the first birth and reducing the amount to Rs 5,000 per woman.

Along with supplementary nutrition and maternity entitlements, there are a number of other direct interventions such as growth monitoring, nutrition and health counselling, treatment of severe malnutrition, provision of child care that are all part of the mandate of the ICDS. For the ICDS to deliver on all these, it requires better resources and infrastructure, appropriate training and staff, adequate remuneration for its workers and so on. Urgent and concerted efforts on all these fronts are essential if we hope to see a better performance in the next GHI.

The writer teaches at Ambedkar University, Delhi, and is associated with the Right to Food campaign.