Captain, my captain! An army behind him

Nawaz Sharif, who came to power in the 2013 election, was ousted over corruption allegations a year ago, removed from office for the third time. 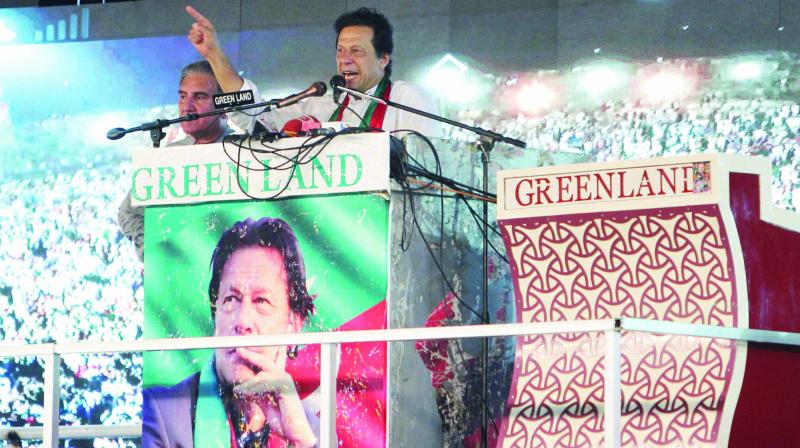 Pakistan, a fragile democracy, rocked by instability and military coups and an all but dead economy goes to the polls on July 25. Pre-poll surveys show iconic cricketer-politician Imran Khan pulling ahead of main rival, former prime minister Nawaz Sharif who has chosen jail rather than self-exile in a bid to win sympathy. Pilloried abroad as a confused Islamist, lampooned at home as ‘Taliban Khan’,  Imran has vilified Nawaz as ‘Modi ka yaar’ (Modi’s friend) and taken a strident anti-India stand. Shahbaz Sharif who could become PM if the PML-N wins, has already signalled he will work with the military and  ‘deep state’. Where does that leave India, ask Pakistan watchers and analysts, wary of Rawalpindi's terror factories that continue to destabilize the region.

The Pakistan general elections – what’s in it for India?  In a word, nothing. If, however, we wish to be very charitable and give a modicum of importance to these elections  - which by all accounts seem to be a ‘selection’ and a fixed match in favour of Imran Khan - even then, the only thing that can be said about these ‘elections’ is that they will fundamentally change nothing for India.

No matter who gets to form the next government in Islamabad, the policy on India will continue to be determined by the military establishment (also known now as ‘miltablishment’), the ‘deep state’ (which includes non-uniformed people even if in a subservient or subordinate role) and the ‘Department of Agriculture’ (a euphemism for the ISI these days). There is absolutely nothing on the ground to suggest that the ‘miltablishment’ or the ‘deep state’ is even interested in ending the animosity and inimicality that has driven the so-called ‘ideology of Pakistan’, the frontiers of which the Pakistan army has taken upon itself to defend.

More than the Pakistani elections of 2018, it is the Indian General Elections 2019 that could see some movement on the Indo-Pak track, if at all. This is so, for two reasons: one, until May-June next year, there is really neither a window for re-engaging Pakistan, nor even any inclination or political advantage in doing so; two, in the event of a change of government in New Delhi next year, even if there is any forward movement from the Indian side, it will be nothing more than a repeat of the past, with the same dismal and disastrous results of the past. The trajectory of ties will beat the same well-worn path: India will reach out, both sides will engage for a while, Pakistanis will speak with a forked tongue, they could make some grand, if also strategically meaningless gesture which will be foolishly lapped up by India (and not for the first time), the terror tap will be opened a little wider by the Pakistanis, there will be a biggish incident, and it will all go back to square one.

For now, however, the only interest India could have in the Pakistani polls is to see if the results throw up any major surprise. For example, if despite all the gerrymandering, field-fixing, engineering defections and intimidating candidates, the King’s party – Imran Khan’s Tehrik-e-Insaaf – falls woefully short and isn’t able to even cobble together a coalition, and the ‘miltablishment’s bete noire – Nawaz Sharif’s Pakistan Muslim League Nawaz (PMLN) and Asif Zardari’s Pakistan People’s Party (PPP) along with some other smaller parties manage to get the numbers for a coalition.

While the chances of something like this happening are very slim, the important point from India’s perspective is whether Pakistan will get a stable government; Or will these elections propel the polity of that country into deep instability. In some ways, regardless of who wins, instability is inherent in the system. The losers will keep questioning the verdict and try to bring down a weak government – not just in terms of numbers but also in terms of its legitimacy – while the government will try to stick on, less by hook and more by crook.

The other element of interest in India, is to see the performance of the radical Islamist and jihadist parties that have made an entry into the political domain. One such party is the Milli Muslim league (wags refer to it as the Military Muslim League), the political wing of the internationally proscribed terrorist group Lashkar-e-Taiba/Jamaat -ud Dawa which is contesting under the label of Allah-o-Akbar Tehreek (a shell party taken over by MML). The other is the Tehreek-e-Labbaik Pakistan, an extremist Barelvi Muslim party which has more candidates than the Pakistan Peoples’ Party (PPP) in Punjab. Then there are the Sunni terror group Sipah-e-Sahaba (its new name is Ahle Sunnat wal Jamaat or ASWJ) which is fighting under the label of yet another shell party, Rah-i-Haq, and of course the five religious parties aliiance, Muttahida Majlis-e-Amal (MMA) which in 2002 had formed the government in Khyber Pakhtunkhwa, and was leading the opposition in the National Assembly.

The performance of these radical groups needs to be measured not so much in the seats they capture but more by the votes they garner. More importantly, once the elections are over, how much influence these Islamists exercise over the policies and programmes of the next government will also be of interest to India because it will indicate the speed at which Pakistan is transitioning from being an Islamic Republic to becoming an Islamic State. The rise of these parties will however not make a major difference to the export of terrorism into India. That is controlled and calibrated by the ‘miltablishment’ and the ‘Department of Agriculture’ and is unlikely to be contingent on who gets to form the next government.

Regardless of whether the next government is a surprise or as expected, and also regardless of whether it is a weak coalition or a strong single party government, it’s focus will primarily be on trying to pull the economy out of the hole in which it finds itself. Fixing the economy will sap the popularity of the government to a point that it will have absolutely no political capital to take any kind of bold initiative with India, assuming that it was inclined to do so in the first place. In any case, managing the civil-military relations and trying to keep it on an even keel  - and thereby avoid a fate similar to the one suffered by Nawaz Sharif - will ensure that the civilians will kowtow to whatever the ‘miltablishment’ instructs them to do on the India track. Someone like Shahbaz Sharif who could become Prime Minister, in the unlikely event of the PMLN forming a government, has already declared that he intends to work with the military and will avoid any and every confrontation with the ‘deep state’.

As for Imran Khan, a closet if also confused Islamist and often lampooned as ‘Taliban Khan’, he has vilified Nawaz Sharif as ‘Modi ka yaar’ (Modi’s friend) and taken a strident anti-India stand. His foreign minister in waiting – Shireen Mazari – is no friend of India’s, and his finance minister in waiting – Asad Umar – has no compunctions in openly associating himself with a international terrorist like Fazlur Rehman Khalil . Incidentally if Khalili becomes Finance Minister he will be the one representing Pakistan at the Financial International Task Force (FATF) that has already put Pakistan on the grey list. He will be trying to convince the international community that Pakistan is cracking down on terror finance!

For India, there is unlikely to be any change in the fundamental dynamics of Pakistan on its anti-India hatred. To give any quarter to the enemy would therefore be an unforgiveable folly.

India needs to use the elections to expose Pakistan before the FATF – every single rupee spent by the MML in its campaign is a violation of the commitments Pakistan has given to the FATF – and also use its presence in the IMF to deny or at least stiffen the terms on which Pakistan will be given a bailout, as and when it approaches the IMF with its bottomless begging bowl.

Finally, the best reaction of the government of India to the election result would be to desist from congratulating the winning candidate selected by the military. Instead, the Indian NSA or the Army chief should troll the de facto ruler of Pakistan – Army Chief General Qamar Bajwa – by congratulating him for winning the elections. This will send a strong signal that henceforth India will only engage with the real powers that be in Pakistan – the Pakistan Army – and not waste time on the powerless civilian puppets.

Riding around in the age of Uber