The low levels of education in the rural areas make people less suitable for skilled jobs and employability. 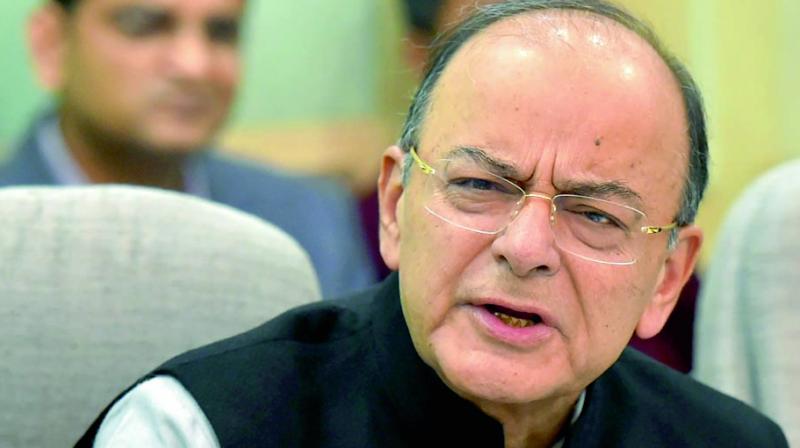 The finance minister Arun Jaitley said the agriculture sector will be prime focus of his Budge for 2018 and the Prime Minister promised to double farm incomes in five years. Keeping these promises as goalposts and the World Economic Forum's latest Global Risks Report 2018 — showing environmental disasters, cybercrime, large-scale involuntary migration and illicit trade as among the most notable risks, in terms of likelihood, facing the world this year — there are issues raised here for the FM to address.

Agricultural Sector
This sector's growth rate has been below GDP growth rate for the past three decades. The average size of the land farmed has decreased to 41.14% (1.16 / 2.82 hectares) in five decades, due to generations of families sharing the same land. The land holding average is 1.16 hectares and two out of three of them are having less than 1 hectare. The agriculture share in the rural output for the decades from 1982 has shrunk by 25.2% (from 64.4% to 39.2%), while employment in agriculture sector did show a decrease of 19.5% (from 83.6% to 64.1%), but not to the corresponding levels. We may discern from this that there is a large number of workers in smaller units, whose overall contribution to the GDP is coming down.

The average farm household income is approximately Rs 77,112/- per annum with approximately 50% is for self-consumption of rice and wheat while most of the output is sold to the trader than to the government agency which provides minimum support price. The input costs are 30%, of which fertilisers (24%) and labour (22.5%). The agricultural sector being exposed to the natural vagaries and price rises, the unviability of small land holding has translated to rural indebtedness, the average loan amount for marginal farmers being Rs 47,000 and the money is borrowed from private moneylenders. To a large extent, this indebtedness has led to Rs 3 lakh farmers killing themselves across India. Now from where will the solution come? The question is how do we reduce the rural indebtedness?  The malnutritional levels are highest in the world with 44% of children under the age of five are underweight and 72% of infants and 52% of married women have anaemia. This also impacts their cognitive abilities, thus reducing per worker productivity, which is lowest in the world. What are the solutions to these issues in the budget?

Let us examine one solution. That is taking away the rural worker to more productive employment, which should reduce the burden on that sector. One statistic that is generally missed in the equation is the education levels in rural areas.

The low levels of education in the rural areas make people less suitable for skilled jobs and employability.  Therefore, the solution may come from investment in education in rural areas which will provide an incentive to get away from agricultural jobs.

Make in India
Let us examine the startup scenario. There are a large number (90%) of failures attributed to lack of innovation by Indian entrepreneurs whose business models are not sustainable. However, Indians are innovative as 750 global MNCs have their research centers in India and most of the global innovations, such as zero light landing and prevention of midair collision software, come from Indian R&D centres. There is no dearth of innovators but they are not enabled to create products and services. How are these asynchronies likely to be addressed by policy interventions? 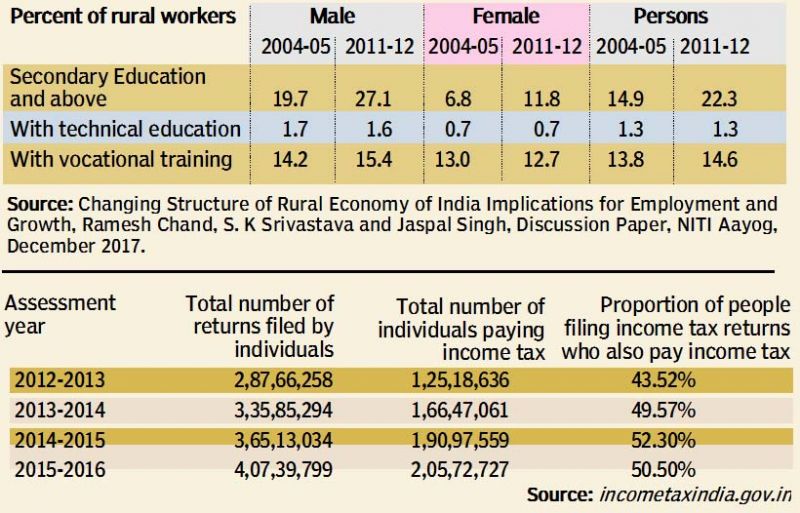 Housing bubble?
The RBI released a report on ‘Affordable Housing in India’. The report explained in detail in a section dealing with home loans that there is an increase of 23.5% in the loans in the less than Rs 10 lakhs segment under the Pradhan Mantri Awas Yojana, where there is interest subsidy of 6.5% for households with income less than Rs 3 lakhs. The loans under this segment amount to Rs 1,08,732 crore. If the default rate increases with more housing loans, non-performing assets are likely to impact the health of Public Sector Banks that are already under greatest strain due to wilful defaulters.

Taxation
Only 0.16% of India's population pays 76% of Income-Tax paid by individuals. There is a claim on the part of GOI that there is an increase in the number of people who are in the tax net. Let us consider the proportions.

We may discern that approximately 50% only pay taxes. It indicates that there will be more work and no tax to the government.  Where is the solution? Behavioural economics suggest if the trust of the individual is low on how his money is being used in economic prosperity, then he or she is likely to avoid taxes. Now these figures clearly indicate that there is trust deficit of the citizens on how his money is spent?

Corporate subsidies
As many as 52,911 profit making companies pay zero tax. The customs duty write offs for jewellery and diamonds cumulatively amount to Rs 5 lakh crores from 2006. In the 2016 Budget, it was promised that corporate subsidies would be removed over a period and yet there is no sign of it.

Will the FM's Budget be creative enough to take the risks, trust deficits and growth to everyone or will it just be more slogan-based economics?

Prof K.Prabhakar is a social economist