Jayati Ghosh
The author is a development economist and professor of economics at the Ce-ntre for Economic Studies and Planning, School of Social Sciences, at JNU

Food Subsidy or Public Distribution System (PDS) is the largest programme followed by Urea Subsidy and the MGNREGS. 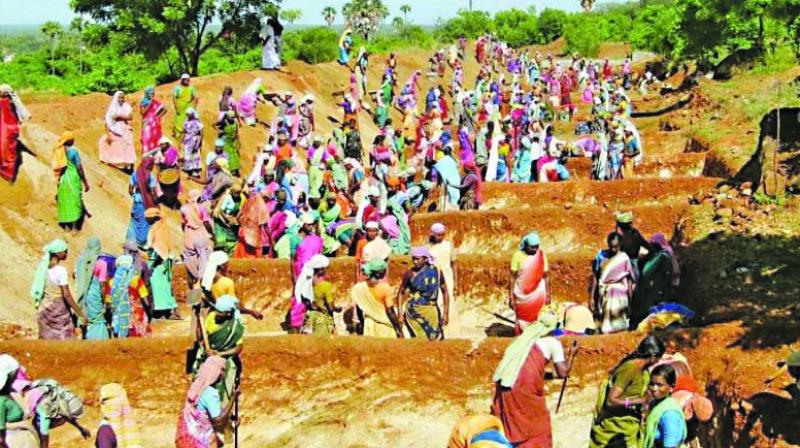 The MGNREGS programme has evolved over the last two years to increase its focus on creation of durable assets, among other things.

Central government is likely to end up reducing real incomes of supposed beneficiaries by cutting down on crucial expenditures like that on  employment guarantee and food security.

In India, we tend to catch up with the latest global policy fashions — but a little late, and often in distorted ways.

Take the idea of the universal basic income (UBI). Most advocates of basic income in the advanced countries do not see this as in any way a substitute for the public provision of services, such as transport, health, education, sanitation and so on — indeed they would be horrified if this were to be the case. Because the idea of the UBI is obviously to improve the material conditions of citizens, not to force them to confront reduced access to worse quality public services. Therefore such transfers are always seen as additions to existing widespread public services, not substitutes.

But in India we have got hold of the wrong end of the stick. Much of the talk around UBI in India is not really about benefiting the poor, but about “fiscal savings” from reducing what are classified as “wasteful subsidies” as well as the food security programme and the employment guarantee programme.

The idea seems to be that the government can cut not just subsidies but also a significant amount of spending that such analysts find to be unproductive, and simply replace it with direct transfers into bank accounts.

Paradoxically, therefore, this shift to providing direct cash transfers in the guise of “basic income” would actually reduce public spending, not increase it.

This is why a scheme that in other countries does not find support from those who want to control government spending has suddenly become popular with fiscal hawks in India. So it appears to have become the flavour of the season for India's economic policy makers, as a quick fix that could also become a vote-catcher.

But there are several concerns in the Indian context. First, it is most likely that whatever basic income is provided would be targeted, rather than universal. This would give rise to the usual problems with targeting, such as unfair exclusion of the deserving and unwarranted inclusion of the undeserving.

Also, targeting is typically based on static indicators at one point in time (often several years earlier) that may not indicate the current conditions of families, since this can change over time especially among those near the poverty line. Since all poverty estimates are based on estimates of household conditions, this also does not allow for unequal economic situations of individual household members, a real problem in India where gender inequalities within families are so stark.

Second, even if so targeted, the costs associated with providing a reasonable level of basic income to a significant proportion of the population are likely to be very high, probably seen as prohibitive especially by a government obsessed with cutting spending.

So the chances are that the amount provided would be much smaller, that it would be even more targeted, and it would therefore not live up to the essential idea of the basic income at all. The amounts provided could be so small that they would barely affect real incomes, or could go to such a tiny group that it most people remain unaffected.

What is worse, it is clear that the Indian government is likely to then cut down on other crucial expenditures like that on the employment guarantee and on food security. This could even end up reducing the real incomes of the supposed beneficiaries, depending on how prices of food and other necessities change.

This it gives rise to the third important concern: that the government is viewing cash transfers as a means of moving out of essential public service delivery, essentially reneging on its Constitutional obligation to ensure the social and economic rights of the citizens.

In the case of food security, the matter is especially troubling not only because of still-high incidence of absolute hunger, but also because of the highly gendered access to food in most poor Indian families. Shifting to small amounts of cash payments by depriving people of both access to wages from public works (and the dignity that comes from work) and basic affordable food would be both damaging and disempowering.

This is not to say that the idea of basic income is wrong in essence — far from it. It is very much part of the idea of a universal social protection floor, which is something all societies must take seriously. But it cannot be seen as a substitute for public provision of basic goods and services; rather it must be an addition to it.

If the government is truly serious about this, it should begin first of all with a universal pension scheme, which is actually something that the Central government has been resisting.

The Central government has not been willing to provide half the minimum wage as a universal pension, something that is even given in Nepal.

At present, access to a non-contributory pension scheme is only available to Below Poverty Line families and specially identified marginal groups like widows. And the Central government provides only the pitiful amount of `200 per month as pension, which has been the same for the past ten years!

With this track record, it makes sense to be sceptical of its intent with respect to universal basic income.