We have TV anchors shouting hoarse declaring everyone who does not agree with them as anti-nationals. 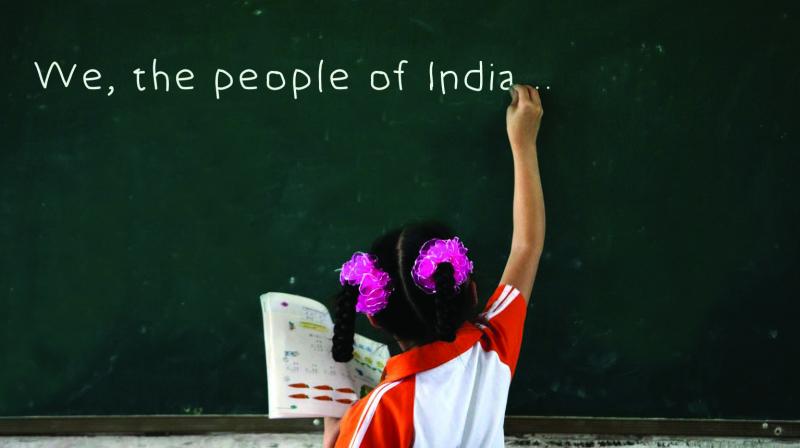 The words ‘We Indians’ are drilled into the minds to check divisiveness.

The Catholic Bishops Conference of India has decided to include lessons on the preamble of the Constitution and constitutional values in the curriculum in church-administered schools. What’s its rationale? How important is it? and How feasible is it?

It would be nice for all of us to go back in time to our early primary school days to recall to ourselves a typical morning ‘school assembly pledge’ that we used to recite: ‘India is my country. All Indians are my brothers and sisters...” We knew it by-heart. Parents used to recall and recite it proudly to their children and grandchildren. Patriotism, love for the country and nationalism with a feeling of spontaneous mutual trust were in every nerve and sinew of our body. Everyone was considered nationalistic and patriotic.

Today, however, there is an altogether new trend emerging in our society. Some people think and claim they are more nationalist than others. We have TV anchors shouting hoarse declaring everyone who does not agree with them as anti-nationals. This better-than-thou attitude creates barriers and divisions in society, triggering in people a sense of insecurity and alienation. Such divisive mindsets, be it of religious or cultural or political origin, are themselves wrong and can pose a very serious threat to the very nationhood of India. The Indian constitution is undoubtedly one of the best in the world. It alone has the power to unite, integrate and carry forward such a multi-faceted nation as ours, ironing out differences, healing wounds and uniting the diversities. Hence this recently emerging divisive thinking that highlights religious or ethnic or cultural or linguistic differences poses a threat to the nation, a menace that needs to be arrested with urgency. This recent situation is disturbing the majority of well-intentioned citizens, intellectuals, religious leaders, teachers and parents who feel they have an important responsibility towards those entrusted to their care. They are convinced that the situation calls for exercising their social and national responsibility to teach, to heal, to integrate, to unite so that all of us may be able to safeguard for the generation next a nation “that has not been broken up into fragments by narrow domestic walls”. They feel a compelling need to revisit the Constitution of India and imbibe the necessary strength from the constitutional values enshrined therein that has the ability to keep this nation protect its unity in diversity.

And hence we are ready to sound the bugle: we have a concern, not necessarily political, that needs to be addressed without sweeping it under the carpet and without burying our head in the sand. It would also be good to affirm that TV channels, journalists and others who try to communalise and try to shoot the messenger make everyone lose their credibility and are in fact are doing a disservice to the nation. It is this genuine concern for the country that prompted the members of the general body meeting of the Catholic Bishops' Conference of India to include constitutional literacy as one crucial part of the 20-point final statement that emerged from the 33rd plenary assembly of Indian bishops held in early February this year at Bangalore. It is this genuine concern for the country that prompted Archbishop Maria Calist Soosa Pakiam of Thiruvananthapuram, president of the Kerala Catholic Bishops’ Council (KCBC) to ask all Christian schools in the country to include the study of the Constitution in their curriculum.

As a follow up, the office for education and culture under the CBCI issued an advisory and release a 9-page module to teach the Preamble of the Constitution in church-managed schools on June 11, 2018. The move is part of the Church’s efforts to help teach young generations the constitutional values. The module on the Preamble consists of a detailed study of the 85-word treatise in four stages. In the first stage, the students are encouraged to memorise the preamble, use it in assembly, recite in primary classes and prepare speeches on the topic in the secondary classes. The second stage stresses the significance of the Preamble and suggests activities like group discussions, quiz contests, essay writing and poster competition. The third stage focuses on the enacting words ‘We the people of India’ and prompts the students to stage skits on celebrating unity in diversity enacting various life situations.

The words ‘We Indians’ are drilled into the minds to check divisiveness. In this stage, senior students are encouraged to interact with juniors on inclusivity. In the fourth stage, the students familiarise with key words in the preamble: sovereign, socialist, secular, democratic and republic. The Constitution promises justice, liberty, equality and fraternity to all citizens without discrimination. The module leads the senior students to review how far the country has achieved these ideals and find out the way forward in the form of an assignment.

It should be reiterated that in 1947 as we shook off the shackles of British imperialism, two countries were born. One called itself Pakistan and decided to be a nation based on a religion - Islam. Amidst bloodshed and riots hundreds of thousands of people crossed over only based on religion. A small minority of Hindus, Christians, Sikhs and other minorities decided to stay back in Pakistan amidst a massive Muslim majority in a country founded for Islam and on the law of Islam. Over the years, those who could from among these minorities have left the country as the comfort level became lesser. Thousands of Muslims, Christians, Sikhs, Buddhists and Jains and other smaller minorities remained back in India.