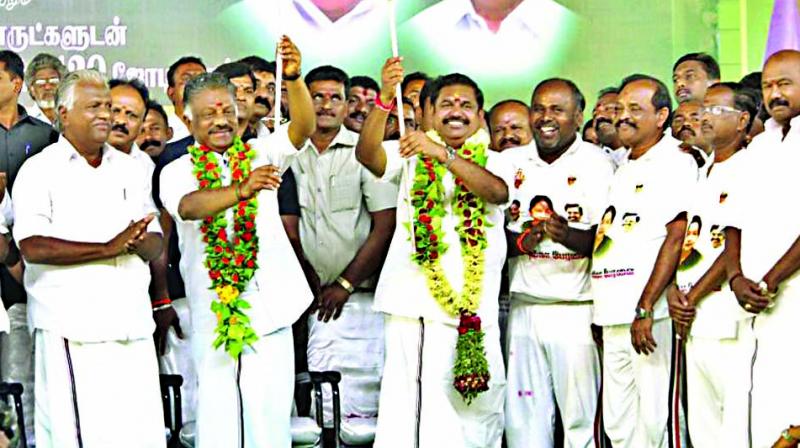 The ruling party may be compelled by present circumstances as well as the empathy Modi had for Jayalalithaa to align, but there are huge ‘known unknowns’ when it comes to aligning with a North Indian party.

The clock is ticking on the Tamil Nadu pre-poll alliances. They may finally coalesce in a predictable pattern of AIADMK+ including BJP, and the DMK+ with Congress the major ally.  Barring seat bargaining, the broad alliances are already known with Vijayakanth’s DMDK and PMK most likely joining forces with the AIADK+, while MDMK and VCK are certain to be on the side of DMK+.

The odds are stacked against an AIADMK sans Jayalalitha. There are pollsters willing to give 80 to 100 per cent of the 39+1 (Puducherry) LS seats to DMK+. If that were to come true, both the ruling party in TN and at the Centre may suffer stinging blows. Remember, there have been two washouts in the state with AIADMK trounced 40-0 in 2004 and the DMK beaten 40-0 (37 to AIADMK, 1 each to BJP and PMK in TN) in 2014.

The ruling party may be compelled by present circumstances as well as the empathy Modi had for Jayalalithaa to align, but there are huge ‘known unknowns’ when it comes to aligning with a North Indian party.

The other unknown in the field is how many votes the AMMK – the rump AIADMK element led by T.T.V. Dhinakaran, Sasikala’s nephew – will take away in what is otherwise mainly a two-way battle between the two major fronts. Kamal Haasan’s fledgling MNM, the joker in the pack.