Navtej is not the only instance of the court’s acti-vism in the face of pusillanimity by the legislative and executive branches. 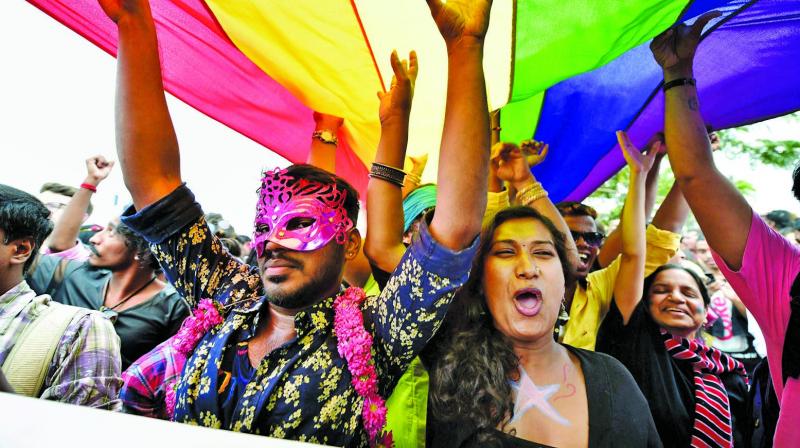 The government’s plea in the SC that it has “no view of its own” on decriminalising homosexuality is a sham. (Photo: AP)

There are strong reasons for the Supreme Court to leave the culture wars to the legislative and executive branches of government. Wading into the political thicket to resolve deeply divisive cultural issues is fraught with danger.

The Supreme Court’s epochal judgment in Navtej Singh Johar decriminalising homosexuality between consenting adults has been correctly lauded for producing a just outcome. However, lost in the congratulatory appl-ause is the fact that Navtej takes the apex court even deeper into the culture wars. And wading into the political thicket to resolve deeply divisive cultural issues is fraught with danger — as the US Supreme Court has found to its peril. The risk is especially parlous when an elected government refuses to take a position and passes the buck to unelected judges. Indeed, this anxiety was underlined by Justice Chandrachud in his opinion: “We as judges [should] remind ourselves of a truth which can unwittingly be forgotten: flattery is a graveyard for the gullible.” Although Navtej was correctly decided, the Chief Justice’s opinion raises concerns and the court should exercise restraint in the future. Here’s why.

First, recollect the gross abdication of responsibility by the government. As Justice Chandrachud noted, the “government has no view of its own on the subject and rests content to abide by the decision of this Court.” To be sure, the government’s evasiveness was not because it had no view — unless one has been living under a rock, one has a view on Section 377. It has always been a notorious provision, and the Naz and Koushal judgments, no doubt, assisted in crystallising popular opinion. And for Indians attuned to international developments, the same-sex marriage debate in America, the Irish referendum, Hollywood, Lady Gaga, et al have all helped to illustrate how anomalous Section 377 is in the modern world. Therefore, the government’s plea in the SC that it has “no view of its own on the subject” is a sham.

So, why did the government make this plea? The answer is simple: popular opinion in India is not yet decisively in favour of decriminalisation and there are no votes in going against the majority view. According to the court’s own judgment, gays likely constitute 7-8 per cent of the population. And abdication on section 377 is not confined to the present government — political parties of all stripes have declined to repeal it in the seven decades since independence.  Given the prevailing religious and cultural stigmas in a conservative country, politicians have taken the path of least resistance.

Should the Supreme Court fill this void? Justice Chandrachud answers in the affirmative: “The ambivalence of the government does not obviate the necessity for a judgment… That is plainly the duty of the court.” While this is true in Navtej because the conclusion was a fait accompli after the court recognised the right to privacy in Puttaswamy, it is not clear that the court should always jump in where the government fears to tread.

There are strong reasons for the court to leave the culture wars to the legislative and executive branches of government. The founding fathers of both the US constitution, and the Indian constitution, which was inspired by the former, recognised this fact in how they designed the constitutional structure.

For instance, Alexander Hamil-ton wrote in Federalist No. 78, “The judiciary, from the nature of its functions, will always be the least dangerous to the political righ-ts of the Cons-titution; because it will be least in a capacity to annoy or injure the-m. The execu-tive not only dispenses the honours, but holds the sword of the community. The legislature not only commands the purse, but prescribes the rules by which the duties and rights of every citizen are to be regulated. The judiciary, on the contrary, has no influence over either the sword or the purse; no direction either of the strength or of the wealth of the society; and can take no active resolution whatever. It may truly be said to have neither FORCE nor WILL, but merely judgment; and must ultimat-ely depend upon the aid of the executive arm even for the efficacy of its judgments.”

Hamilton was clear that the judiciary was the “weakest of the three departments”. Similarly, Montesquieu noted in his Spirit of Laws that “the judiciary is next to nothing.”

Times have changed and the court is no longer the weakest branch. Navtej is not the only inst-ance of the court’s activism in the face of pusillanimity by the legislative and executive branches. In recent years, the court has sought to administer cr-icket, create transgender rights, jump into jallikattu, commandeer corruption investigations, administer admissions into educational programmes, craft environmental rules, and rule on religious matters. And it has created new rights such as a fundamental “right to education”.

To be sure, many of these decisions have won widespread support because they are an antidote to poor governance and utter inaction by Parliament. However, as Hamilton noted, judicial decisions have to be implemented by the executive, and several of the court’s activist judgments have merely created rights on paper. The executive has shown no inclination to give effect to them and having neither purse nor sword, the court is powerless to do anything. And faced with this reality, the court is treading on even more dangerous terrain — ordering the legislative branch to make law. For instance, in the mob lynching cases currently before the court, CJ Misra denounced “horrendous acts of mobocracy” and asked Parliament to enact an anti-lynching law. Not content with the directive, the court also issued orders that look eerily like legislation. Whilst no one quibbles about the need to stop mob lynchings, the problem is that the Constitution does not give the SC power to order legislation. Such orders are clearly disrespectful to the other co-equal branches of government and violate the separation of powers.

Aside from technical niceties, there are other reasons for caution. First, judges are unelected. If Parliament gets it wrong on issues where the popular opinion is divided, they are accountable at the voting booth. Judges are not. Second, Parliament has access to technical expertise on topics such as pollution standards, telecom regulation, cricket administration, etc., in a way that the court does not. Third, Parliament can tailor legislation to cover a broader swathe of situations than a court, which is only authorised to decide the dispute before it. Fourth, Parliament can amend legislation as required. The court can only decide cases brought before it and cannot amend judgments to fit changed circumstances. Koushal is a good example — even though most people thought it was a terrible decision, it took five years to overrule. Fifth, activism allows the legislative and legislature branches to free-ride. By dumping unpopular issues on judges, politicians can dodge blame for divisive social changes. When public anger mounts, judges, and the court, will be vulnerable to attack with no means to defend themselves. And as judges take on more of these culture war cases, the risk of offending various groups rises with obvious negative implications for the court’s legitimacy. Sixth, the organic evolution of social consensus through education and norms entrepreneurship is hindered by judges imposing solutions. Finally, activism cuts both ways — what happens when extremely conservative judges use activism to issue judgments that favour religious rights? What if a future court rules that religious rights trump gender equality in temples? Or that restaurants don’t have to serve gays due to religious reasons? These are not fanciful worries — just look at the recent American examples of Masterpiece Cakeshop v. Colorado Civil Rights Commission (upholding the religious rights of a baker who refused to bake a cake for a gay couple) and Burwell v. Hobby Lobby Stores (striking down the contraceptive mandate under Obam-acare). If the Indian SC turns conservative, the groups now cheering activ-ism will be hoist on their own petard.

The Indian Supreme Court must learn from the experience of its American counterparts. This is not to say that inequality and violations of individual rights must be tolerated.

The court should only intervene when there is a clearly manifested actual injury rather than mere apprehensions without evidence. And it should steer clear of legislating desirable social change from the bench. In America, culture wars over guns, God, and gays have made the Supreme Court a political battle ground and damaged the institution.

Unless things change, activism over the 4Gs — God, Gender, Gays, and Governance — may lead the Indian Supreme Court to a similar fate. Montesquieu, Hami-lton, and Ambedkar might all turn in their graves at the state of the “weakest department”.