Just not defence, new improved S-400s can hit back 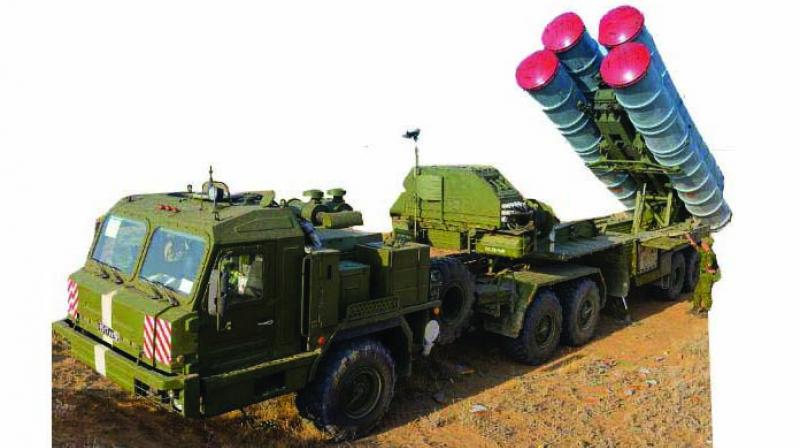 The S-400 is very versatile. It has four different missiles, the very long range 40 N6 (400 km) series, which is ready for deployment.

The purchase of the S-400 missile system has become a point of contention between various countries and the United States. Through its Countering America's Adversaries Through Sanctions Act (CAASTA), the US has threatened sanctions on countries seeking to buy this or any other significant Russian-built military system.

Even a country like India, which sees itself as being close to the US, has come under the cross-hairs of Uncle Sam. US officials have repeatedly warned New Delhi that it will face sanctions for its purchase which was finalised during the recent visit of President Putin to New Delhi. President Trump's comment that India will find out about the US reaction to the purchase "sooner than you think" has a dangerous tone to it.

As for China, last month it was placed under CAATSA sanctions for its purchase of Su-35 fighters and the S-400 system. The third country that is buying the system is Turkey, a member of NATO. Turkey has made it clear that it's a done deal and there is no turning back on it. Turkey is also seeking to acquire the top-of-the-line US fighter F-35 for whose development it contributed $ 1 billion.

In addition, Saudi Arabia and Qatar have also expressed an interest in the system.   So why do these countries want to buy the system ?

For one, it is a very versatile and lethal. It is a massive upgrade of the older S-300 and is considered one of the most advanced systems in the world. Its radar and other sensors cover an extensive area. The radar can cover over 600 kms for surveillance and its missiles have a reach of nearly 400 kms. Further, it can track a very large number of targets, including stealth aircraft and take out the most threatening 6 targets.

The whole system is highly mobile and built on vehicles that can move very quickly from place to place.  The S-400 is very versatile. It has four different missiles, the very long range 40 N6 (400 km) series, which is ready for deployment. The 48N6 (250 km), the 9M96 (120 km) and the short range 9M96E (40 km). The 9M96E flies at very high speeds and can engage very-low level targets and manoeuvre very  sharply. It is capable of taking out aircraft, as well as missiles, especially cruise missiles. In addition, it has "plug on" radar systems which can be used to defeat stealth aircraft. But in the coming years, the Russians could upgrade to the long range  77N6-N and the 77N6-NI missiles which are inert "hit to kill" interceptors optimised for both anti-aircraft and ballistic missile warheads.

India has an old history with Soviet/Russian anti-aircraft missiles and their associated radar systems. The first acquisition in 1964 was the SA-2 (Guideline), a two-stage missile with a range of 7 to 40 kms and a ceiling of nearly 90,000 ft. They were deployed in fixed sites around the major cities like Delhi, Mumbai, Kolkata and at several locations in  Punjab and Rajasthan. Baroda served as a training centre.

After these were phased out in the 1980s, India relied on the SA-3 Pechora system that it had begun acquiring from the Soviet Union in the mid-1970s. These systems are still around and have since been upgraded. The missiles have a range of some 25 kms and a ceiling of 18 kms. For shorter ranges the SA-8B missiles are used. Increasingly, some of these tasks are now being done by the Akash missile which was developed from the Soviet-era SA-6 missile.

Even though the system will only be deployed beginning 2020, the new system is a blessing for the  Indian Air Force. Over the years, the numbers of its fighters have been declining. Bungled acquisition processes and government's niggardly ways have prevented their replacement. This has meant that the IAF has had to look carefully at its air defence responsibilities and tasks.

Such a missile which can take care of intruding enemy fighters over a vast range is a boon since it will reduce the effort the IAF fighters have to make to guard the national skies and enable them to focus on attacking enemy targets. But its principal task would be to defend key cities like Delhi, Mumbai, and the important economic areas of Gujarat/ Maharashtra. But its high mobility gives it the ability of being used in different modes and roles as well.

So though it is likely to be used for air defence, the S-400 can also be used for offensive tasks like targeting the early warning and electronics intelligence aircraft of adversaries. In this sense the system could be a major headache for Pakistan because of its geography. Even systems based 150-200 kms for the border will be able to cover the trans-Indus air space of Pakistan.