10 per cent quota the ultimate appeasement

The new quota is NDA’s final political weapon to address concerns over jobs, DeMo and GST. 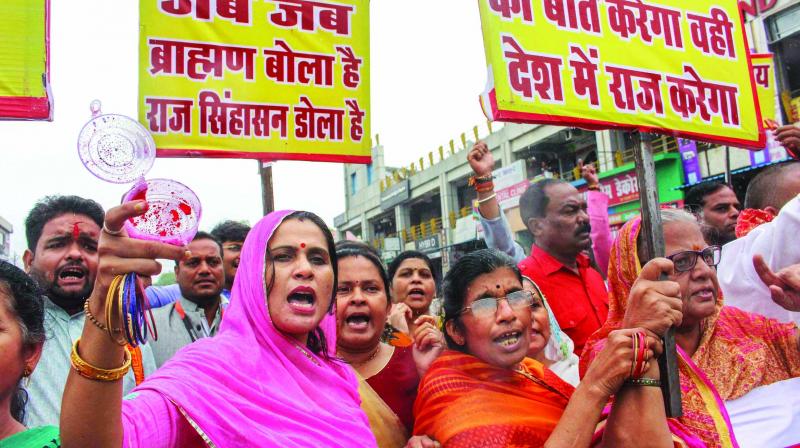 A file photo of upper caste protesters demanding reservation in government jobs and educational institutions during a protest in September 2018.

Through the 10% EWS quota Bill, the BJP has tried to ensure that dominant communities, especially in politically crucial states of Uttar Pradesh and Bihar — which together send 120 MPs to Lok Sabha — come back to its fold before elections.

Appeasement to none seemed to be the undeclared motto of the Narendra  Modi dispensation ever since it stormed to power at the Centre in May 2014. However in the face of the impending Lok Sabha polls, and having not actually been able to score on the jobs front, saddled with the havoc caused by demonetisation, and faced with disenchantment among traders owing to the implementation of GST (Goods and Services Tax) —- the NDA has unleashed the Constitution amendment bill, which advocates 10 per cent quota beyond the Supreme Court-prescribed cap of 50 per cent for the economically weaker people in upper castes, as its final political weapon. While for the BJP it may be a political masterstroke aimed at changing the dynamics of the impending political slugfest, political analysts say that it is the ultimate appeasement measure undertaken by the NDA government, through which it is trying to change the political landscape throughout the country prior to the Lok Sabha polls.

The move has a history to it, a few months back in the face of violent protests by members of the SCs and STs after the Supreme Court had “diluted” the provisions of the Scheduled Caste and Scheduled Tribe (Prevention of  Atrocities) Act, the Centre had restored the penal provisions of the legislation after effecting amendments in it.

This stoked the latent fire as several dominant communities like Marathas and Jats launched nation-wide marches and agitations seeking reservations for themselves.

Cornered, the Maharashtra Assembly in November last year unanimously passed a legislation giving 16 per cent reservation in jobs and educational institutions for the Maratha community, while the Centre got the Constitution Amendment Bill passed from Parliament, giving 10 per cent reservation to economically weaker sections among the upper castes.

Having faced political setbacks in the recent Assembly polls in crucial Hindi heartland states of Rajasthan, Madhya Pradesh and Chhattisgarh, the BJP brought the legislation to rob the sheen out of the Congress-led Opposition’s campaign.

Through the move, the BJP has tried to ensure that dominant communities, especially in politically crucial states of Uttar Pradesh and Bihar — the two states which are key for any party to capture power at the Centre — come back to its fold before the Lok Sabha elections.

While the Opposition has clearly seen through the BJP’s intentions through the move as the timing of the Bill is all too obvious, it remains to be seen that with just four months left for the general elections to commence, whether the Bill will bring in the desired effect for the NDA or not.

The Opposition, on its part, will try and convey a message to the electorate across the country that the move is too late in the day and anything being implemented now will only prove counter-productive for the ruling party at the Centre.

Pegged back by the Rafale jet deal controversy, the Centre has cleverly played the reservation card for economically poor among the upper castes as it knows that even the Opposition parties would not be able to openly oppose it at the risk of angering the upper caste communities.

However, as the legislation is facing legal challenge (as it provides for 10 per cent quota over and above the prescribed 50 per cent cap on reservation put  by the Supreme Court), the government would be on tenterhooks as to how it would showcase it as one of its achievements in case the Bill is struck down by apex court.

So the legislation may prove to be a tight ropewalk for all parties in the forthcoming polls with legal as well as social pitfalls to be countered.