When will India qualify for the World cup?

The World Cup has shown that neither wealth nor size of population matters in producing quality football teams. 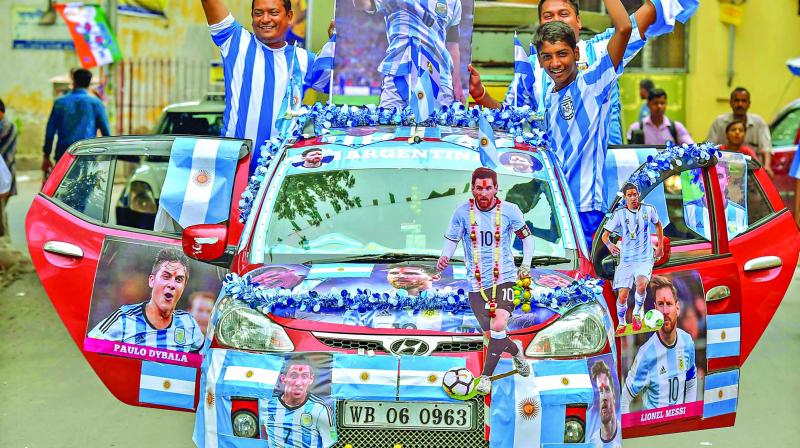 Kolkata youngsters flaunt their loyalty to Argentina by decorating a car with posters of Messi & Co. (Photo: PTI)

The live telecast of the World Cup in India first took place in 1986. It was telecast on the national channel and in urban areas people had access to colour TV sets and the spectacle of the incomparable Diego Maradona and the thrills of the World Cup were witnessed by a large section of the population. The popularity of Argentina especially in Kerala and Bengal stems from the fact that many Indians of that generation saw the tournament live and were witness to Maradona’s exhilarating ball skills.

It also showed that Indian football was light years behind the rest of the world. The fervent popularity of the Kolkata clubs dimmed briefly as people realised that the superstars of Indian football were basically paper tigers. It also led to another question when India’s football standards would improve so that they could qualify for the greatest show on earth.

Every four years this question returned as the World Cup was telecast live till 1998 on the national channel and from the 21st century on satellite TV channels.  It did lead to some response from the All India Football Federation as they formed a national league in 1997 called the National Football League which in 2007 became the I-league. In 2014 came the Indian Super League financed by IMG-Reliance, marketing partners of the AIFF.

These various leagues have led to greater income for the players. National captain Sunil Chettri has a contract worth `1.50 crore and defender Sandesh Jhingan gets `1.20 crore from Kerala Blasters. The current generation of Indian players do not have to depend on public sector jobs to earn a livelihood after they retire.

The marketing of Indian football is much better, the players are paid well, looked after well, have better knowledge of diet and infrastructure and support staff has improved. However in the qualifiers for the 2018 World Cup, India lost seven of the eight matches they played, including an away match to tiny Guam. India’s only win was against Guam at home.

Considering these results just two years ago, it is obvious that qualification for the World Cup is a distant dream. The question gets raised every four years but sadly also within the next four weeks it subsides. Impressive viewership figures are cited to show that football is the second most popular sport in India.

Over 153 million viewers had tuned into the 2018 Fifa World Cup in Russia in the group stage of the tournament, according to figures from Sony Pictures Network. The tournament is being telecast live on three channels and live streamed on the related app and website. Regional language feeds contributed 47% of the total number of which female viewership was 47%.

The viewership figures increase with every World Cup. But this does not imply that the standard of the game in the country will improve. The World Cup is unique because it is hard to imagine another single event that means so much to so many people and fixes so many eyes on the same spot. Over 14,000 Indians fans have traveled to Russia for the tournament. This is an indication of increasing economic prosperity among middle class Indians and the desire to be counted among the global elite, painting their faces with the colours of the team they support, waving scarves and banners and singing songs.

There are also some genuine fans like 84 year old Panna Lal Chatterjee and his 78 year-old wife from Kolkata who have been going to every World Cup since 1982. Their monthly pension is only `12,000 but they save for four years to make it to the World Cup. Buying a ticket for matches in the World Cup is not cheap. For group matches the cost of each ticket ranged from `6,729 to `14,100. In the quarter-finals it is `11,216 to `23,393. For the final it will be from `29,162 to `70,501. The Chatterjees could only see two group matches — Brazil versus Costa Rica and Argentina versus Croatia.

Many of these fans who go to World Cup matches do not spend money to witness games involving Indian clubs. Indian football fans should stop dreaming about participation in the World Cup. We have to plan and think 20-30 years ahead and improve infrastructure, academies, makes each state organise domestic leagues, and have more clubs participate in domestic tournaments, Only then only we will produce a team that can compete with the best in Asia to qualify for the World Cup.

There is this common belief that in a large population like ours, there is plenty of talent that remains untapped and an unknown Lionel Messi exists somewhere. But what people do not realise is that Messi is not where he is because of Argentina but because of La Masia, the Barcelona youth academy that made him a superstar.

The World Cup has shown that neither wealth nor size of population matters in producing quality football teams. Senegal maybe the poorest country at the 2018 World Cup with a per capita income of just $1,038 but the quality of their football was far superior to Saudi Arabia with a per capita income $21,120. Senegal was one of the most impressive of all the teams, from Africa and Asia, along with prosperous Japan. So wealth and prosperity are not indicators of football success. The wealthiest country in the World Cup, Switzerland has not progressed to the quarter-finals since 1954. Similarly, size does not matter. Iceland with a population of just 350,000 maintained their shape excellently and held mighty Argentina to a 1-1 draw. Their mental toughness enabled them to frustrate Lionel Messi and Sergio Aguero.

We must realise that in football it is even more difficult for a player to make a mark as a professional player. In all, 210 countries play football. Out of those, it is the no. 1 game in 190 countries. It is not like cricket where the World Cup sees only a handful of countries.

To improve standards we need more academies like Tata Football Academy and Chandigarh Football Academy which are doing sustained development work. The AIFF’s centre for excellence in Goa has also produced many good players. The squad for the U-17 World Cup held last year consisted entirely of players from the AIFF academy and the Chandigarh Football Academy. Many of the academies and soccer schools that exist have failed in producing players who can succeed at the professional level. Instead, most of them have catered to people who play the game till they get admission in good universities or colleges. My concern is that Indian football is becoming more of a middle-class phenomenon and the lower-middle class or the working class is getting alienated and moving to cricket, which offers a better livelihood in our country.

Every time the World Cup is held, I get asked when India will qualify for it or be in the big league. Initially I reacted cynically about it but now I feel it is absurd. We keep postponing our objective each time we aim to realise it. In 2002, I received a T-shirt captioned ‘India in 2010’. The same target has now been revised to ‘India in 2026’. There is a glimmer of hope for India in 2026 as Fifa intends to raise the number of World Cup participants to 48 in the final round which will include eight from Asia.

The road ahead maybe paved with good intentions but there are many stumbling blocks. There is no easy passage to the World Cup, The top five in Asia, — Japan, South Korea, Iran, Saudi Arabia and Australia — are miles ahead of us in football development and performance. The next tier of Asian nations are China, United Arab Emirates, Qatar, Kuwait, Syria, Bahrain, Iraq, North Korea, Uzbekistan and Thailand.

India is still among the third division of football playing nations in Asia. Our first aim should be to progress to the second division of Asian nations for which sustained developmental work is required. There is a fallacious belief that a top class coach like Pep Guardiola or Jose Mourinho can transform the Indian football team. Coaches cannot do wonders. Joachim Low’s fate should be a wake-up call. There is no magic formula. There are miles to go before India can aim for World Cup participation and much developmental work to be done by local state associations, clubs and the AIFF. Viewership figures during a World Cup is not a signifier for success.