However, as cyclone Fani has moved away, flight operations resumed at Kolkata and Bhubaneswar airports on Saturday, said ministry of civil aviation. 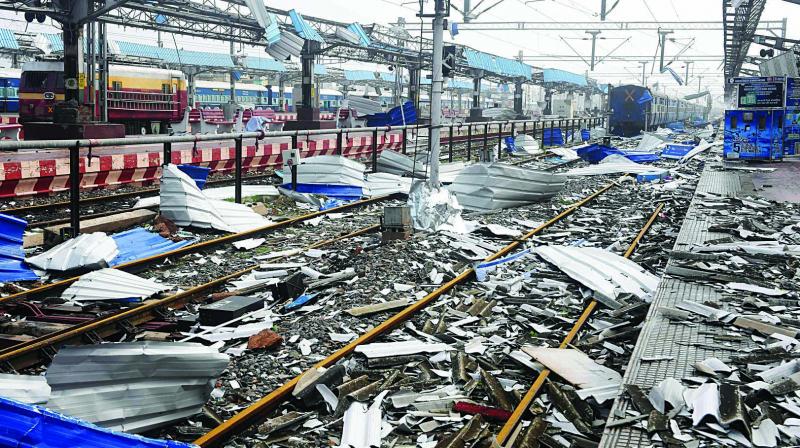 Debris litters the train tracks at the damaged railway station in Puri on Saturday, a day after Fani swept through the area. (Photo: AFP)

Puri: Vast stretches of coastal Odisha on Saturday looked like a war-zone as Cyclone Fani devoured everything that came on its path. Pilgrim city Puri, where Fani made its landfall, is reduced to rubble with many buildings and temples suffering heavy damage. The offices of the district collector, superintendent of police and Puri Club are among the prominent places which have suffered damages. Puri’s Lord Jagannath temple also bore the brunt of the cyclone. Though no official information was shared about the damages, temple priests said some stones had fallen off the structure. Kalpabata, a holy tree inside the temple premises, and a few other small temples, were also affected. Though routine rituals of the temple were not discontinued, devotees were denied darshan amid repair work. Priests said the temple will be opened for devotees on Sunday evening.

Restoration of electricity and water supply still remained a major tasks for the administration. At many places, 33KV and 11KV lines have snapped, raising doubts about restoration of power supply within seven days.

People also made a beelines before filling stations for petrol and diesel. Unconfirmed reports said nearly 20 people had died in different parts of the state. Most casualties were reported from capital city Bhubaneswar. Nearly 300 injured were undergoing treatment at various hospitals.

However, as cyclone Fani has moved away, flight operations resumed at Kolkata and Bhubaneswar airports on Saturday, said ministry of civil aviation.

“Flight operations to and from Bhubaneswar airport has resumed. Alliance Air flight from Ranchi is the first flight to land,” tweeted the ministry on Saturday at 4.26 pm. Meanwhile, Railways will resume all train services from Bhubaneshwar on Sunday, except two, and it has already cleared the Howrah-Chennai mainline.