‘The myth of Modi’s invincibility busted’

In an interview to Sreeparna Chakrabarty, Mr Raja held out the hope that a collective leadership could defeat the Modi monolith. 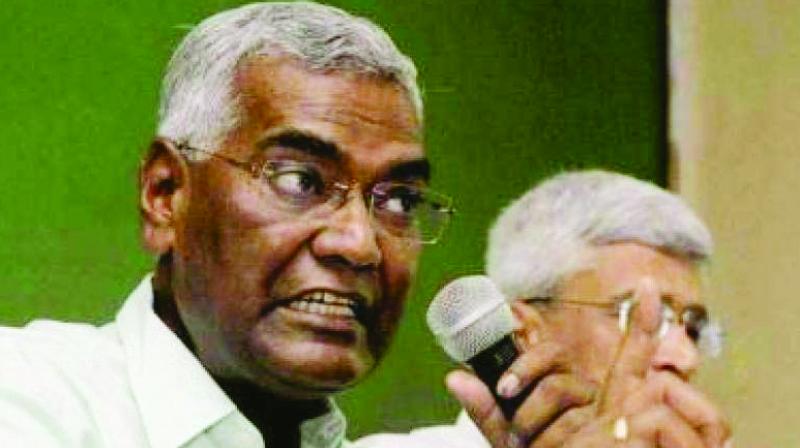 D. Raja, National Secretary of the Communist Party of India

As the schism within the CPI(M) continues on whether to back the Congress party led UPA, against the BJP-led NDA or not, D. Raja, National Secretary of the Communist Party of India said that the recent setback to the BJP in successive polls and bypolls has made all the opposition parties come to the realization that the PM Modi and the BJP can be beaten. In an interview to Sreeparna Chakrabarty, Mr Raja held out the hope that a collective leadership could defeat the Modi monolith.

How workable do you think the idea of Opposition unity is.
A: There is an understanding among all the parties, among  the opposition, among the secular parties that the country is passing through a very challenging period because of the BJP and RSS. The way the ideology of hate is being propagated, questions the very constitution and democratic ideals. The economic policies of the government are also against the interests of people. The government has committed itself to further the interests of corporate houses. The current situation demands that all these parties come together and put out the broadest possible resistance. You can see the mood of the people is changing. The myth created by BJP and its propaganda machine that the onward march of the BJP cannot be stopped or of the invincibility of Modi has been busted now. Recent polls in Gujarat and bypolls in Rajasthan and Bengal have shown the BJP its place. In Punjab and Goa also, the BJP did not win but came to power through manipulation. That is why the BJP is desperate now. The budget is also the result of this desperation. It is full of empty hollow claims.

But how can parties which are rivals at the state level come together on the national stage?
A: This is the current political scenario at the national level. When elections come, the political tactical line will be state specific, depending upon the balance of political forces. In some states there will be difficulty. It is understandable. But not necessarily everywhere. One thing is that parties in opposition have realised that the primary objective is to defeat the BJP-RSS combine.

Will this opposition alliance be forged pre or post the election?
A: In the last meeting of Opposition parties on February 1, it was agreed by everybody that there is a need to strengthen coordination in both houses. Outside parliament we should reach out to people on issues. For this, everybody has agreed that we need to consult and coordinate at the political level.

What about NDA allies who are unhappy?
A: That is expected. Look at the style of functioning of the current BJP. Vajpayee had the experience of working with more than 20 parties but in the new arrangement in BJP, the party policies are dictated by RSS. Regional parties will find it difficult to work with them.

Will the Opposition take these disgruntled parties into its fold?
A: The situation will drastically change in favour of secular, democratic, Left forces. This question is premature.