Obsession with caste politics continues to haunt public debates even after seven decades of Independence. 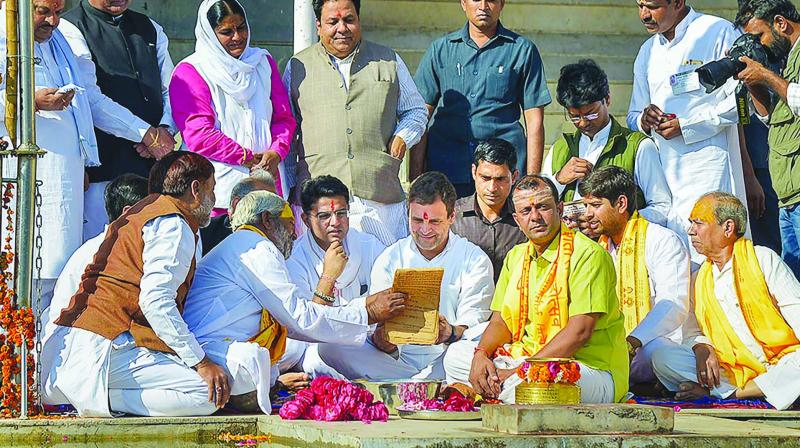 The populist ideal of our democracy is becoming irrelevant in practice.

Rahul Gandhi declaring his gotra and the debate surrounding it has become a major issue during the ongoing election campaign. leaders, instead of working as agents of social change, are busy shaping the political behaviour of electorates in terms of social identities, reinforcing the caste system.

The ongoing Assembly elections in Madhya Pradesh, Rajasthan, Chhattisgarh, Telangana and Mizoram are being projected as the semi-final for 2019 Lok Sabha elections. The electoral machinery of ruling and Opposition parties is into mobilising electorates using all forms and styles of immediate or non-mediated political strategies. Yet, there is nothing exotic about the political campaigns except mudslinging along caste, communal and personal lines. Ironically, neither the promises made to people before elections nor their deliveries by incumbent parties in these states have been used as a mobilisational campaign agenda. There is a conspicuous absence of an alternative framework for an ailing economy of the states, growing unemployment, declining law and order, unresponsiveness of democratic institutions, banking crisis, inflation, rampant corruption, agrarian crisis, poor governance, communal disharmony and so on. But we are seeing politicians acting as partisan figures, exploiting caste and communal sentiments to the level of absurdity. The net result is the erosion of decency in the language of campaigning where the opponents are not only viewed as figures of mutual contempt but also failing in offering a sober critic or justification to their exclusive policies or programmes.

Paradoxically, India’s obsession with caste politics continues to haunt public debates even after seven decades of India’s Independence. The leaders of mainstream political parties including Congress and Bharatiya Janata Party (BJP) are more into spicing up the imaginations of the electorates with irrational, unguided and contemptuous manipulations along caste and communal lines like: “whether or not Lord Hanuman is from the low castes”, “whether or not low-caste politicians talk about Hinduism”, “whether or not Rahul Gandhi belongs to the Brahmin gotra of Dattatreya”, “whether or not Rahul Gandhi is a Janeu Dhari Hindu”. Where are we heading? How have we come to such a sorry state of affairs? The nature of such debates is an indication of the wilful denial of credible discussion on policy failures and economic slowdown. It merely shows that political parties are not willing to get past performances appraised by electorates. What kind of mental framework do our politicians want to bring to the democratic life of India?

Will low-caste voters turn to the BJP in these states if the low-caste identity of Lord Hanuman is proved by BJP’s Yogi Adityanath? Will they be empowered with a mere invocation of Hanuman’s caste identity? Will Brahmins be appeased and vote for Congress if they are put on a high pedestal by Congress’ C.P. Joshi while taking a jibe at Narendra Modi and Uma Bharti’s caste identity? How the problematisation of ascribed or acquired Rahul Gandhi’s gotra is going to impact the electoral fate of the Congress and BJP in these states? Will the binary of “Good Hindu and Bad Hindu” debate serve any purpose in delivering electoral dividends? If the answer to these questions is ‘yes’, then we are certainly failing as a mature democracy and in training our electorates in citizenship framework. It clearly manifests either the incapacity of politicians to engage with people in policy framework or a deliberate effort to keep the electorates away from the substantive appraisal of ruling or alternate policies. Whatever may be the case, Indian democracy is fast becoming a victim of the manifest incapacity or manoeuvring of politicians to engage with the electorates in the policy framework.

Unfortunately, the elections in the five states are not going to be a verdict on the incumbent’s policies or their economic ramifications for the electorates but on the strategic balance of partisan loyalties maintained by the political parties. It is largely because the electoral campaigns and mobilisations are plausibly based on fragmenting, defragmenting and re-fragmenting the caste groups already consolidated by the political parties. The relative weight of these factors is more compelling and rewarding for the parties. There is a clear absence of assessment of the representative ability of the candidates as the focus is more on caste calculations like “who represents which caste”. The candidacy is decided on the principle of who can better manage the loyalties of numerically dominant castes to the party in the constituencies concerned. Ministerial allocations are equally based on caste arithmetic so is the allocation of party’s portfolios.

Undoubtedly, caste is political and political is caste in Indian politics. As a result, we are more into the direction of giving a new lease of life to the entrenched social hierarchy of caste without doing service to the people struggling at the bottom of it. Political parties are merely devising strategies to appease caste sensibilities of lower castes without delivering on the front of social justice and social insecurities. What is more surprising is that the electorates mostly get attracted to such parties and politicians. There is a need to explore the contours of the crisis more deeply at the level of electorates. I argue that Indian voters, be they informed or otherwise, are making political choices not on the basis of policy preferences or ideological commitments but on the basis of ‘who they are’, and ‘what caste or religion they belong to’. Such voters may be coping with unemployment, business reverses, inflation, homelessness, poor amenities, poverty etc. Yet they are prone to yield irrational caste prejudices in the political sphere. They are constantly hypnotised and habitually trained to fail in conveying coherent policy preferences through ‘issue-based voting’. The political space is the mirror image of social hierarchies. And political parties, instead of working as an agent of social change, are busy shaping the political behaviour of the electorates in terms of their social identities and thus reinforcing the system of caste.

Finally, I argue that the populist ideal of our democracy is becoming irrelevant in practice, leaving the current crop of politicians free to pursue their own goals and privileges. Voters are made myopic and caste addict to discount the past performances of leaders while voting.