States reluctant to include fuel, liquor

The official didn’t respond to a question on the impact on state revenues if liquor is included in GST as there’s no such proposal or demand.

States are reluctant to have liquor and fuels under GST as it will put them at a disadvantage financially. The proposal if carried through will not only dent revenues of states, but also pose a challenging situation for the Centre.

Liquor, LPG, natural gas, aviation turbine fuel (ATF), petrol and diesel are exempt from GST. The Centre gets excise revenue and states get VAT on these products. It may not be an easy task to handle, but can be done in phases, said Somesh Kumar, principal secretary, TS commercial taxes department.

VAT revenues from liquor, petrol and diesel sales contribute 46 per cent to Telangana state’s total revenues. It is more or less the same for other states.

“It’s an issue to be agreed upon by the GST Council and then states have to agree. Telangana state gets Rs 9,000 crore from VAT on petrol and diesel annually. The Centre gets revenues in the form of excise duty,” Mr Kumar said. 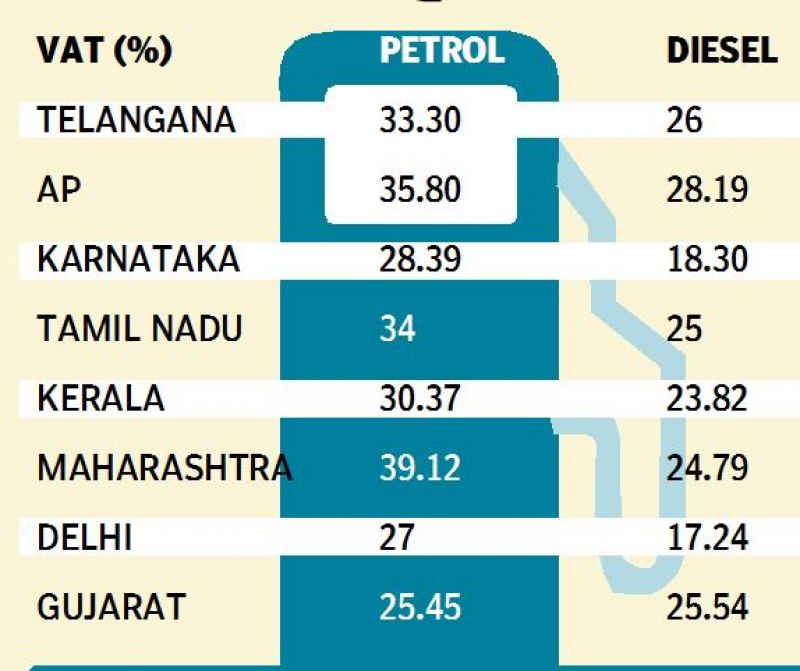 “I think it’s a tricky issue. Let’s start with simpler things. First of all, it’s better to include LPG, natural gas and ATF in the GST basket. Then the Centre and states can think of imposing GST on petrol and diesel,” Mr Kumar said.

The official didn’t respond to a question on the impact on state revenues if liquor is included in GST as there’s no such proposal or demand.

The continuous surge in petrol and diesel prices is fetching the Telangana state government additional revenue of Rs 100 crore every month. The state recorded over Rs 800 crore revenue from fuel sales in May.

Given this background, and the highly fluctuating nature of fuel prices, there are talks in business circles and demands from the public to bring petrol products under GST with the expectation that this would lower the prices. This has been a contentious issue for quite some time and is being discussed in the GST Council, said Mr S.N. Panigrahi, GST consultant and corporate trainer.

“The real crux of the matter is the highly differentiated tax structure of states. If these items come under GST, the maximum rate should be 28 per cent plus compensation cess of 15 per cent. This may become 40 per cent, which then will be shared by the Centre and state equally. The total taxes of the Centre and the states VAT at present are much higher. States may lose substantial amounts of revenue and are very reluctant,” Mr Panigrahi said.