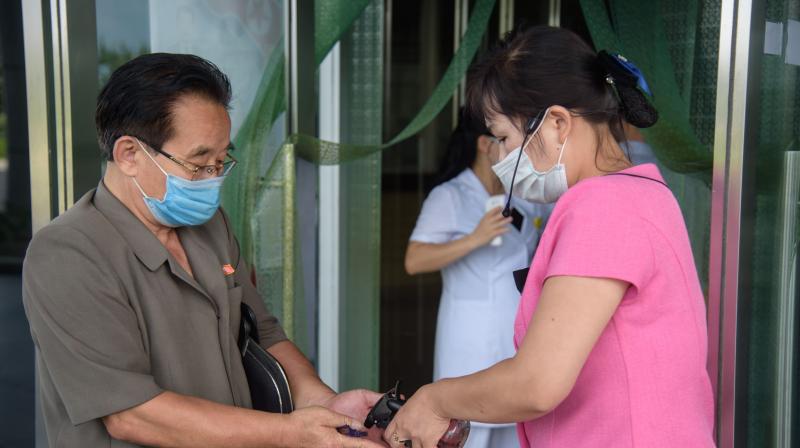 A visitor (L) given hand sanitizer as he enters the Ryugyong Health Complex in Pyongyang. (AFP)

Seoul: North Korea’s test results for a man suspected of being the country’s first coronavirus case were inconclusive, though authorities have quarantined over 3,635 primary and secondary contacts, a World Health Organization official told Reuters.

On July 26 North Korea said it had declared a state of emergency and locked down the border city of Kaesong after a person who defected to South Korea three years ago returned across the fortified border with what state media said were symptoms of COVID-19.

At the time, state media was unclear over whether the man had been tested, saying “uncertain result was made from several medical check-ups”. But leader Kim Jong Un declared that “the vicious virus could be said to have entered the country.”

If confirmed, the case would have been the first officially acknowledged by North Korean authorities, but since then, state media have continued to say no cases have been reported.

“The person was tested for COVID-19, but test results were inconclusive,” Dr. Edwin Salvador, WHO representative for North Korea, said in comments emailed to Reuters on Wednesday.

As many as 64 first contacts and 3,571 secondary contacts of the suspected case have been identified and quarantined in government facilities for a period of 40 days, Salvador said.

Kaesong remains under lockdown, and household doctors continue to conduct surveillance in the city, he said.

Despite having no confirmed cases, North Korea had imposed a widespread lockdown and conducted contract tracing, he added.

North Korea’s ruling party newspaper, Rodong Sinmun, called on Wednesday for all citizens to take part in anti-epidemic measures warning that any breach of rules could have “critical consequences”.

Some outside experts and U.S. officials have cast doubts on North Korea’s claim to have no coronavirus cases, but no cases have been independently confirmed.