Old prejudices are dissolving and new partnerships between women and men are developing. 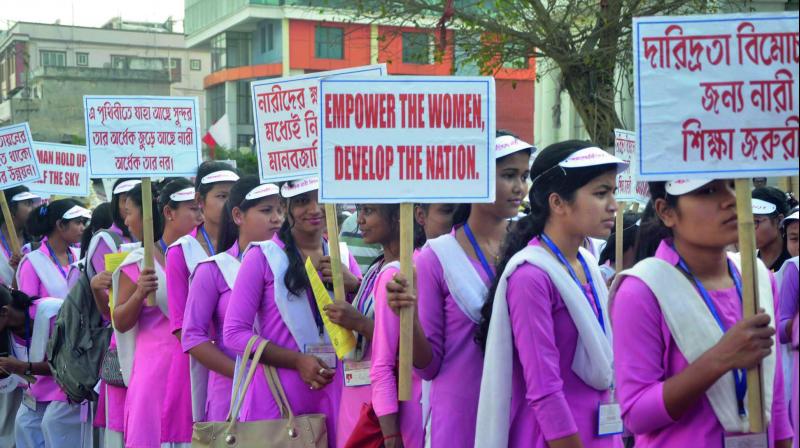 College student participate in an awareness rally on the eve of International Women’s Day in Agartala. (Photo: PTI)

In her opening address to the United Nations World Conference on Women, Aung San Suu Kyi had said: “There is an outmoded Burmese proverb still recited by men who wish to deny that women too can play a part in bringing necessary change and progress to their society: ‘The dawn rises only when the rooster crows.’ But Burmese people today are well aware of the scientific reasons behind the rising of dawn and the falling of dusk. And the intelligent rooster surely realises that it is because dawn comes that it crows and not the other way round.”

How true it is for rural India. Its women are now heralding the dawn and the roosters are waking up to the new socioeconomic and political revolution that is emerging in the countryside. Women throughout India are ensuring that roads are repaired, electricity is brought to their villages, schools are built, toilets are installed, water sources are made safe, medical services are available, local savings groups are formed, and the list goes on and on. When put in charge, women in India have shown they are better than men at providing public good, which have grater priority for the community.

The harbinger of this social change is a seismic innovation of modern democracy by which women have been given reservation in the village councils. In 1993, India introduced Panchayati Raj (Village Government) Act, a constitutional amendment, which stipulated that village councils needed to reserve one-third of their seats, and one-third of their council leader positions, for women. The vision was that those female-headed councils would bring greater transparency and better governance in their villages. As a byproduct, women’s status and that of girls might improve.

A lot of women (sometimes backed by family support) harbouring aspirations to positions of power have enthusiastically fought elections and emerged winners. Transcending their ascribed roles, they have dispelled the myth that women are good just for homes. They have refused to succumb to the pressures and have successfully brought about changes in their community.

Having women as at least one-third of all local elected representatives are beginning to transform gender relations and strike at the deeply entrenched patriarchal system. Old prejudices are dissolving and new partnerships between women and men are developing. For example, one man from Maharashtra who works with women panchayat leaders said: “I realised when I started working with these women leaders that I needed to begin my work at home.” He has started to view his relationship with his wife as a partnership and has begun doing household chores — something he never imagined he would do. Earlier women representatives were often perceived as puppets of men. Yet, women panchayat leaders say that “women are beginning to cut those (puppet) strings”. They are furrowing the age-old trunks of gender-biased customs and more.

The new role models the legislation created did have a dramatic impact on families and younger women in large parts of the hinterland. This innovation, writes Iris Bohnet of Harvard’s Kennedy School of Government, in her book What Works: Gender Equality by Design, showed that “the act of seeing women lead increased women’s self-confidence and their willingness to compete in male-dominated domains, and it changed men’s and women’s beliefs about what an effective leader looked like”.

With the advent of female village leaders, the likelihood that a woman spoke up in a village meeting increased by 25 per cent. Villagers who had been exposed to at least two female chiefs in West Bengal overcame their initial bias against women as leaders and rated male and female leaders equally. Exposure to a female leader makes voters realise that women have the ability to lead effectively. Successful and effective women leaders have improved perceptions of female leaders’ effectiveness and led to electoral gains for women in future, unreserved elections.

But obstacles to the realisation of the transformative potential are many. There is still tremendous resistance to devolution of funds from centres of (male) power to the periphery. Patriarchal currents running through rural lives and institutions have proved far more influential and persistent than any law or policy. Gender inequality is usually enforced by a set of biased and deeply entrenched social codes and traditions against women’s participation in public life. Interventions that plan to rupture these biases must be focused on the variety of interrelated institutions (political, legal, religious and social) that have established — and continue to reaffirm — the patriarchal ideology.

There is enough evidence in the truism of what society has been told for centuries: women are supposed to work twice as hard as men, for half the reward. This is still an unequal world. But women are freer than they have ever been to build independent lives, to refuse to be shamed into lives they did not choose. They can’t “have it all” when the system is broken. It’s time and beyond time for women to start asking what else they want, starting, perhaps, with a fairer deal.

Panchayat Raj reminds us of a central truth: power is not something people give away. It has to be negotiated, and sometimes wrested from those who have remained unvanquished even by the tide of political storms. Enshrining political change within the law has forced both the pace and direction of such change.

Village women’s struggle for empowerment and participation in India’s growth, in the face of heavy odds, has been a revolutionary saga. Surprisingly, the media and the public intellectuals, who have been so strongly and convincingly gunning for transparency at the higher levels, missed the enormous grassroots movement that is not only reducing the trust deficit but imbuing the grassroots public institutions with greater transparency and stronger governance. But many of these women have elbowed their way into the narrow bandwidth clogged with political stories. For poor women, it is a journey towards the second freedom or the real freedom, as Mahatma Gandhi said when he talked of the unfinished agenda at the time of Independence.

The writer is a well-known banker, author and Islamic researcher. He can be reached at moinqazi123@gmail.com