A work crew removed the metal detectors from one entrance to the compound in the early hours. 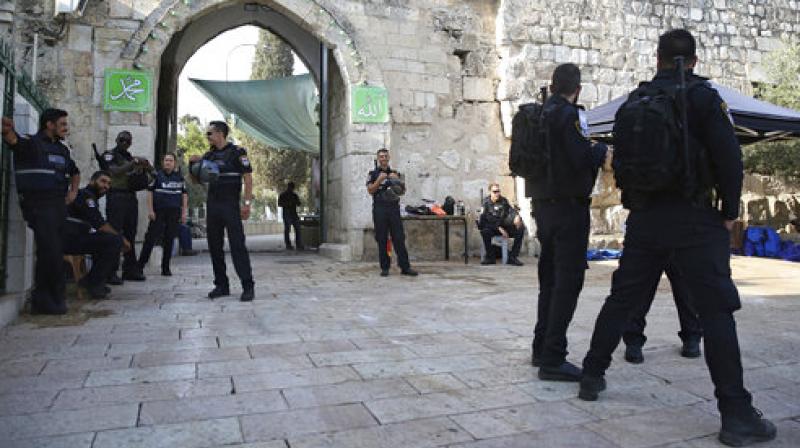 Israel has begun dismantling metal detectors it installed a week earlier at the gates of a contested Jerusalem shrine, amid widespread Muslim protests. (Photo: AP)

Jerusalem: Israel removed metal detectors from a highly sensitive Jerusalem holy site before dawn on Tuesday and said they would no longer be used after their installation triggered deadly violence.

The move came in the face of intensive international diplomacy seeking to stop wider Palestinian unrest, with Israel saying it would introduce subtler security measures instead to secure the site following a fatal attack.

Muslim officials remained undecided on Tuesday morning as to whether to accept Israel's move and end their halt to prayers at the Haram al-Sharif mosque compound, known to Jews as the Temple Mount.

A work crew removed the metal detectors from one entrance to the compound in the early hours, and cameras installed on overhead bridges in recent days were also gone, an AFP correspondent reported.

A few dozen Israeli security personnel stood quietly around the entrance, outside which Muslims have prayed for days in protest of the metal detectors.

Israel's security cabinet took the decision to remove the detectors early on Tuesday.

They decided "to change the inspection with metal detectors to a security inspection based on advanced technologies and other means," Prime Minister Benjamin Netanyahu's office said.

As word spread of the decision, a few hundred Palestinians gathered to celebrate near an entrance to the mosque compound.

One person set off a firework, prompting Israeli police to use sound grenades to disperse the crowd.

Details of the advanced technologies the cabinet planned to use were not immediately clear.

"This movement is a movement of the street," said Sheikh Raed Dana of the Waqf, the Islamic endowments organisation which administers the mosque compound.

"We as the Waqf listen to the street. The street says yes and we say yes; if the street says no to the measures, we will say no," he told AFP following the Israeli decision.

Israel installed metal detectors at entrances to the compound, which incorporates the Al-Aqsa mosque and the Dome of the Rock, after an attack on July 14 that killed two policemen.

Palestinians viewed the new security measures as Israel asserting further control over the site. They refused to enter the compound in protest and prayed in the streets outside instead.

Israeli authorities said the metal detectors were needed because the July 14 attackers smuggled guns into the compound and emerged from it to shoot the officers.

The decision to remove the metal detectors followed talks between Netanyahu and Jordan's King Abdullah II.

Jordan is the official custodian of Muslim holy sites in Jerusalem.

It also came after one of US President Donald Trump's top aides, Jason Greenblatt, arrived in Israel for talks on the crisis and with the UN Middle East envoy warning of the risks of escalation.

"The dangers on the ground will escalate if we go through another cycle of Friday prayer without a resolution to this current crisis," Nickolay Mladenov said after briefing the UN Security Council, which met to discuss how to defuse the tensions on Monday.

Mladenov warned that the Jerusalem violence could spread "beyond the Middle East itself".

A separate diplomatic standoff may have helped push negotiations to remove the metal detectors along.

On Sunday night in Amman, an Israeli embassy security guard shot dead a Jordanian who attacked him with a screwdriver, according to Israeli officials.

A second Jordanian was also killed, apparently by accident.

Jordan insisted on questioning the security guard, while Israel said he had diplomatic immunity.

The guard arrived back in Israel late Monday along with other embassy staff, apparently after an agreement was brokered.

During discussions with Netanyahu, Abdullah had demanded that Israel remove the metal detectors.

Friday's main weekly Muslim prayers -- which typically draw thousands to Al-Aqsa -- had brought the situation to a boil.

Friday evening also saw a Palestinian break into a home in a Jewish settlement in the West Bank during a Sabbath dinner and stab four Israelis, killing three of them.

The Israeli army said the 19-year-old Palestinian had spoken in a Facebook post of the holy site and of dying as a martyr.

The mosque compound has served as a rallying cry for Palestinians.

In 2000, a visit to it by then Israeli opposition leader Ariel Sharon helped ignite the second Palestinian intifada, or uprising, which lasted more than four years.

The compound lies in east Jerusalem, seized by Israel in the Six-Day War of 1967 and later annexed in a move never recognised by the international community.

Considered the third holiest site in Islam, it is the most sacred for Jews.