Among the four candidates, hard-line judiciary chief Ebrahim Raisi appears to be the front-runner 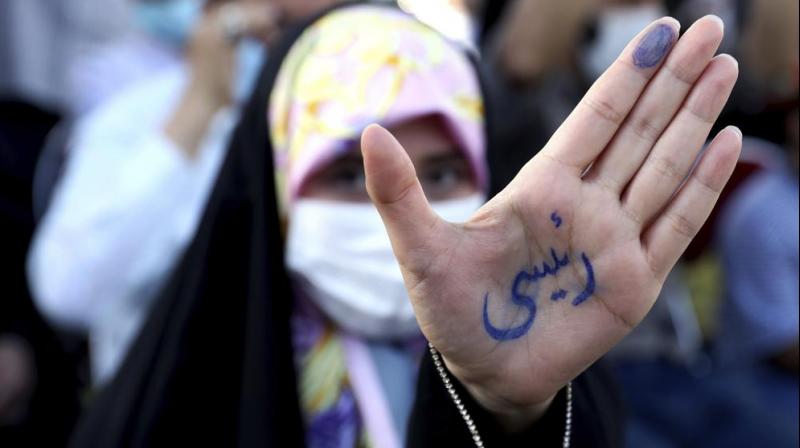 A supporter of presidential candidate Ebrahim Raisi shows her hand with writing in Persian that reads "Raisi", during a rally in Tehran, Iran. (Photo: AP)

Dubai: Iran's presidential election Friday will determine who will lead the country's civilian government as tensions remain high between the Islamic Republic and the West over its tattered nuclear deal with world powers.

Among the four candidates, hard-line judiciary chief Ebrahim Raisi appears to be the front-runner based on state-linked polling. Abdolnasser Hemmati, the former head of Iran's Central Bank, appears to be representing moderates in the race. Also running are Mohsen Rezaei, a former Revolutionary Guard commander; and Amir Hossein Ghazizadeh, a current lawmaker. At the country's three debates, it appeared to instead be a two-man race as candidates largely targeted Hemmati for criticism over being part of the administration of current President Hassan Rouhani until recently.

WHO IS NOT RUNNING?

Rouhani, whose government reached the 2015 nuclear deal with world powers, is term limited from seeking another four years in office. The Guardian Council, Iran's constitutional watchdog that approves candidates, also barred a number of prominent candidates from running this year. They included Ali Larijani, a conservative former parliament speaker who in recent years found himself allied with Rouhani. Also barred was former hard-line President Mahmoud Ahmadinejad. He still remains popular for his populist policies while in office despite his antagonism of the West. While Larijani accepted being blocked, Ahmadinejad has urged his supporters not to take part in the vote. Meanwhile, women remain barred from running, as do those calling for wholesale change in the country's government.

WHAT IS AT STAKE?

Iran's president oversees the civilian arm of the country's government. The president sets domestic policy, which is important as Iran has faced years of crushing sanctions from the US after then-President Donald Trump unilaterally withdrew America from Tehran's nuclear deal. Those economic problems have seen nationwide protests twice in Rouhani's time in office. Iran also has faced wave after wave of new cases in the ongoing coronavirus pandemic. The presidency also sets the tone for how Iran interacts with the wider world. However, the winning candidate will be under Iran's supreme leader, who has final say on all matters of state.

WHAT POWER DOES THE SUPREME LEADER HAVE?

At the heart of Iran's complex power-sharing government created after the 1979 Islamic Revolution is the supreme leader. The supreme leader also serves as the country's commander-in-chief of its military and the powerful Revolutionary Guard, a paramilitary force that also has vast economic holdings across Iran. An 88-member elected clerical panel called the Assembly of Experts appoints the supreme leader and can remove one as well, though that's never happened. Iran's current supreme leader, Ayatollah Ali Khamenei, is 82  leading some analysts to suggest this might be the last election he oversees.

SO IS IRAN A DEMOCRACY?

Iran describes itself as an Islamic Republic. It holds elections and has elected representatives passing laws and governing on behalf of its people, though the supreme leader has the final say on all state matters. However, the Guardian Council barred most allies of Rouhani and reformists from running in this election.

Those who led Iran's Green Movement after Ahmadinejad's disputed 2009 re-election also remain under house arrest. Iran does not allow international observers to monitor its elections, which its Interior Ministry oversees. Security forces answering only to the supreme leader also routinely arrest and hold closed-door trials for dual nationals, foreigners and those with Western ties, using them as pawns in international negotiations. Raisi, as the head of the judiciary, faces international criticism for those arrests.