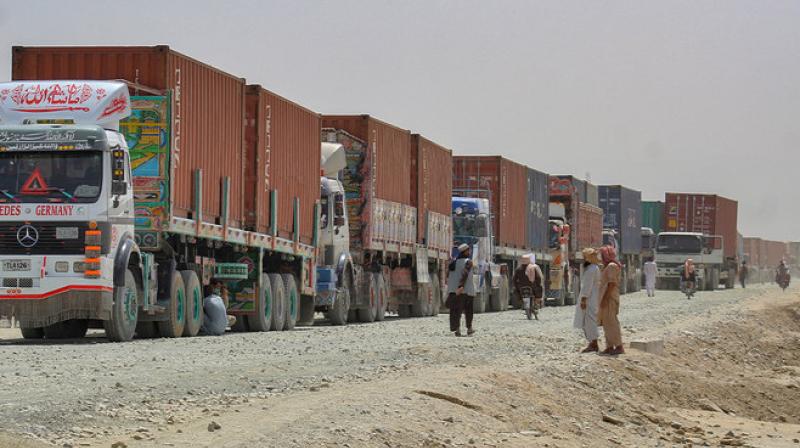 India has already announced to send 50,000 tonnes of wheat and medicines to Afghanistan by road transport through Pakistan. (AFP file photo)

Islamabad: India's wheat shipment to Afghanistan as part of its humanitarian aid to the trouble-torn country through the Pakistani soil is expected to start early next month as New Delhi and Islamabad have finally agreed on the modalities after months of discussions, a media report said on Saturday.

India has been pitching for providing unimpeded humanitarian aid to Afghanistan to address the unfolding humanitarian crisis in the country. It has already announced to send 50,000 tonnes of wheat and medicines to Afghanistan by road transport through Pakistan.

Pakistan last year allowed India to send 50,000 metric tonnes of wheat to Afghanistan by using its land route after the humanitarian situation worsened in the wake of the Taliban's takeover of Kabul.

Diplomatic sources told The Express Tribune newspaper that the shipment would start in early February.

According to the modalities, India has to transport the total amount of wheat within 30 days of the first consignment.

The two countries have decided to cooperate on Afghanistan despite their otherwise tense relationship.

It took both the sides several weeks of discussions to agree on the modalities.

Initially, Pakistan wanted the transportation of humanitarian assistance goods to Kabul in its trucks under the banner of the United Nations.

But India made a counter proposal and wanted the food grain to be shipped to Afghanistan either in Indian or Afghan trucks. The two sides then agreed that wheat would be carried by Afghan trucks and a list of Afghan contractors was shared with Pakistan.

Foreign Office spokesperson Asim Iftikhar Ahmad told reporters on Friday that all arrangements were now put in place and Pakistan was waiting for the date of the first consignment.

India had sent a proposal to Pakistan on October 7 last year seeking the transit facility to send 50,000 tonnes of wheat and life-saving medicines to the people of Afghanistan via the Pakistani soil and it received a response from Islamabad on November 24.

"During the last few weeks, 3.6 tonnes of medical assistance and 5,00,000 doses of Covid vaccines have been supplied," he said.

The process to procure wheat and to arrange its transportation is currently underway, he said, adding that this takes some time.

Earlier this month, UN Secretary-General Antonio Guterres warned that millions of Afghans are on the verge of death, urging the international community to fund the global body's USD 5 billion humanitarian appeal, release the country's frozen assets and reignite its banking system to avert a major economic and social collapse.

Afghanistan has been under Taliban rule since August 15 last year when the Afghan hardline militant group ousted the elected government of president Ashraf Ghani and forced him to flee the country and take refuge in the UAE.