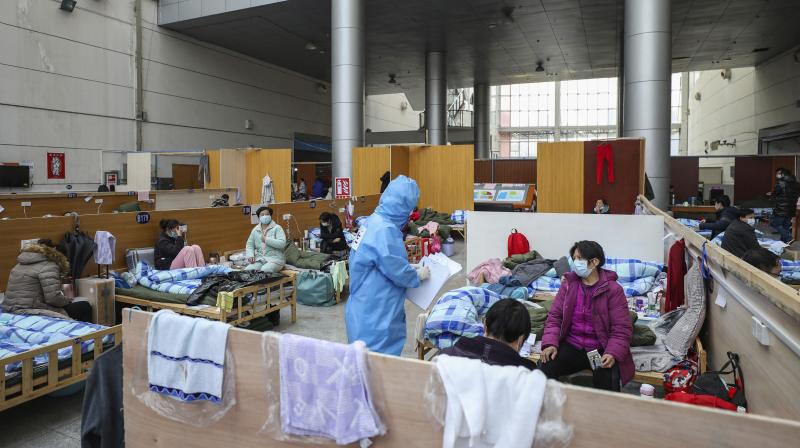 In this Friday, Feb. 21, 2020, photo, a doctor in a protective suit checks with patients at a temporary hospital at Tazihu Gymnasium in Wuhan in central China's Hubei province. China's leadership sounded a cautious note Friday about the country's progress in halting the spread of the new virus that has now killed more than 2,200 people, after several days of upbeat messages. (AP)

Beijing: Ninety-seven more people died in China due to the coronavirus (Covid-19), taking the death toll to 2,442, officials said on Sunday, as a team of WHO experts visited the worst-affected Wuhan city in Hubei province.

By the end of last night, a total of 2,442 people had died of the disease and 76,936 confirmed cases of novel coronavirus infection had been reported in 31 provincial-level regions, China's National Health Commission (NHC) said in its daily update today.

Ninety-six deaths were reported from Hubei province and one from Guangdong province besides 648 new confirmed cases of coronavirus infections, it said.

The NHC also said China's daily number of newly cured and discharged novel coronavirus patients has surpassed that of new confirmed infections for the fifth consecutive day, indicating that cases of infections are coming down.

Yesterday saw 2,230 people walk out of hospital after recovery, much higher than the number of the same day's new confirmed infections, which was 648, Xinhua reported.

A total of 22,888 patients infected with the novel coronavirus had been discharged from hospital after recovery by the end of Saturday, NHC said.

Meanwhile, a team of public health experts from the World Health Organisation (WHO) visited Wuhan to conduct a detailed probe into the outbreak which reportedly originated from a seafood market in the city in December last year.

The NHC said WHO experts along with their Chinese counterparts who formed a joint investigation team have held talks with the local health authority in Wuhan and visited relevant healthcare institutions.

The 12-member team, which arrived in China on Monday, was initially designated to visit only Beijing, Guangdong and Sichuan provinces, while the worst-affected Hubei province and its capital Wuhan were missing from the list.

However, the team was finally given permission to visit Wuhan by the Chinese government.

Besides controlling the spread of the virus, a major task for the WHO team along with their Chinese counterparts was to come up with standard medicine to cure the disease.

The NHC said on Saturday that the team had met top Chinese respiratory disease expert Zhong Nanshan in Guangdong, and visited the centre for disease control and prevention in Guangdong and the city of Shenzhen, and Sichuan.

The specialists also discussed quarantine measures, the wild animal trade and community prevention measures with their Chinese counterparts, it said.