The bill sends a message of bipartisan support from US Congress for the democratic aspirations of the majority of Hong Kong. 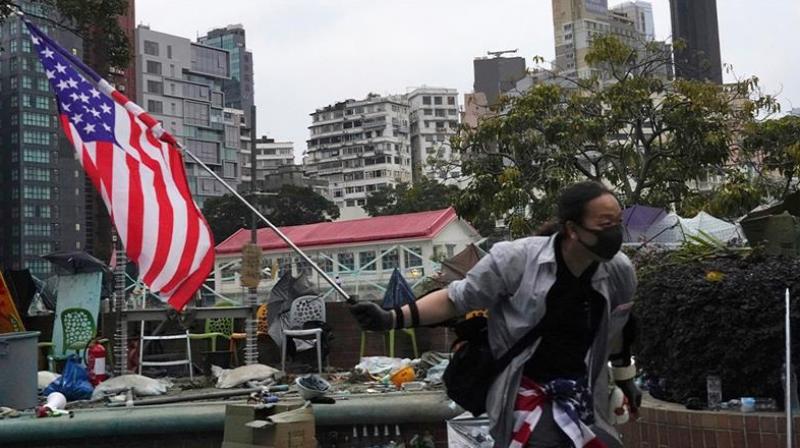 The bill - if it becomes law - will demand greater scrutiny of the city's special status, which among other things prohibit the commercial export of certain munitions to the Communist party-controlled Hong Kong Police Force, would provide sanctions against officials responsible for human rights violations in Hong Kong. (Photo: AP)

Washington: In a show of solidarity with pro-democracy supporters in Hong Kong, the US Senate has unanimously passed legislation that would force the Trump administration to assess whether political unrest in the vital global financial hub justifies changing its unique treatment under the US law.

The Hong Kong Human Rights and Democracy Act of 2019 that was passed on Tuesday would also require the Secretary of State to certify at least once a year that Hong Kong still retains enough autonomy to warrant the special US trading consideration that bolsters its status as a world financial center.

The US treats semi-autonomous Hong Kong, which has its own legal and political systems, differently from the Chinese mainland when it comes to trade and export controls.

The bill - if it becomes law - will demand greater scrutiny of the city's special status, which among other things prohibit the commercial export of certain munitions to the Communist party-controlled Hong Kong Police Force, would provide sanctions against officials responsible for human rights violations in Hong Kong.

The House of Representatives passed a similar legislation in October.

"This bill sends an important message of bipartisan support from the US Congress for the democratic aspirations of the broad majority of the people of Hong Kong," Senator Dick Durbin said.

"The US Senate took a stand today in support of the Hong Kong people. Passing this legislation is an important step forward in holding the Chinese Communist Party accountable for its erosion of Hong Kong's autonomy and its repression of fundamental freedoms," said Risch.

Rubio said the passage of the bill was an important step in holding accountable those Chinese and Hong Kong government officials responsible for Hong Kong's eroding autonomy and human rights violations.

Both the United States Senate and the House of Representatives have now demonstrated bipartisan solidarity with the people of Hong Kong as they stand up for their freedoms and basic human rights, said Cardin.

"It's what we do as a democracy – support each other, especially when authoritarian regimes try to impose their will on free peoples. As the situation in Hong Kong deteriorates, China must understand that the United States of America is committed to the promised freedom and autonomy for Hong Kong," he said.

Noting that the Senate has taken a momentous step forward in America's long history of standing up for democracy and human rights across the world, Menendez said with the situation in Hong Kong nearing a breaking point, this legislation will hopefully be a shot in the arm for the millions who have been patiently waiting for the US to once again serve as a beacon of light and solidarity in their push to defend their basic rights and autonomy.

"Hong Kong authorities must de-escalate this situation by taking the appropriate steps to address the democratic desires of the people of Hong Kong, including forming an independent commission to investigate police violence. This legislation makes it clear that the US will stand firmly and unambiguously with the legitimate aspirations of the people of Hong Kong," he said.

"We have sent a message to President Xi (Jinping): your suppression of freedom, whether in Hong Kong, in northwest China or anywhere else will not stand. You cannot be a great leader and you cannot be a great country when you oppose freedom when you are so brutal to the people of Hong Kong, young and old, who are protesting," Schumer said.

"When you are so brutal to the Uyghurs in northwest China, and when China is censored so the Chinese people can't get the truth. History has shown that that always fails, President Xi. Always fails, and yet China has taken dramatic steps backward in the curtailment of freedom," he said.

Annie Boyajian, Director of Advocacy at Freedom House, said over the last six months of protests, one has seen increasingly aggressive treatment of demonstrators by police, and intensifying violations of the 'one country, two systems' model by the Chinese Communist Party.

The bill would address these issues by requiring annual US government certification that Hong Kong remains sufficiently autonomous to merit special treatment under US law.

It allows for sanctions on perpetrators of human rights abuses, which would leave them unable to vacation or study in the US, access funds in US bank accounts, work with US business or carry out dollar-denominated transactions.

Sanctioned parties would additionally face difficulty in banking at any institution with strong ties to the US, Boyajian said.

Since June, Hong Kong has seen massive, regular demonstrations, which started in opposition to a proposed bill that would have allowed its citizens to be extradited to the mainland.

The protests quickly morphed into wider calls for democracy and opposition to growing Chinese influence. Beijing denies interfering in Hong Kong's affairs and has blamed Western countries for stirring up unrest.