Thanks but no thanks: Bill Gates to honour PM Modi despite Kashmir concerns

Modi government presented an order in Parliament on August 5 revoking the autonomy of Jammu and Kashmir state. 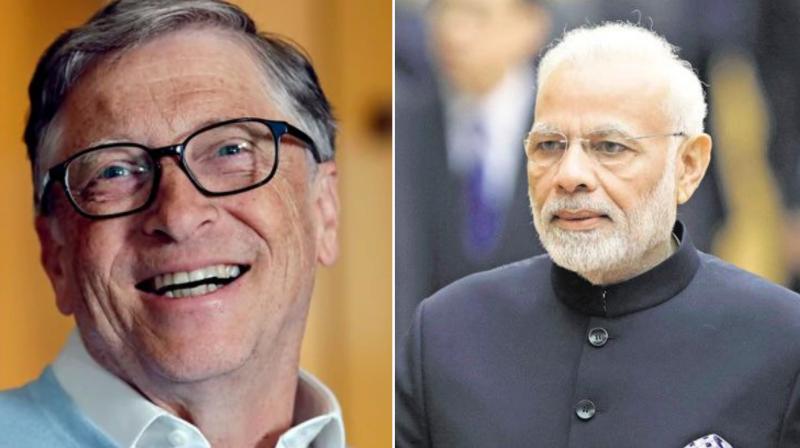 The Gates Foundation in a statement said it respects the petitioners' views, but Modi will receive its annual Goalkeepers Global Goals Award for providing 500 million people in India safer sanitation. (Photo: AP)

A dozen people, some wearing "Free Kashmir" T-shirts, with the Justice For All coalition delivered 100,000 petition signatures to the Gates Foundation's Seattle headquarters on Monday, asking the world's largest private nonprofit not to honor Modi's Swachh Bharat Mission, a sanitation initiative that improved access to toilets.

Javed Sikander, a demonstrator in Seattle who said he is a former Microsoft employee, spoke of his admiration for the Microsoft co-founder, calling Bill Gates and his namesake foundation an inspiration.

"That is all the more reason we're so disappointed that the foundation would honour a person who is clearly committing human rights violations in India," Sikander said.

Modi's Hindu nationalist-led government presented an order in Parliament on August 5 revoking the autonomy of india's only Muslim-majority state.

It has imposed tighter controls on india's side of Kashmir, including limiting internet access, mobile and landline phones and cable TV in the disputed region home to 12.5 million people.

The Gates Foundation in a statement said it respects the petitioners' views, but Modi will receive its annual Goalkeepers Global Goals Award for providing 500 million people in India safer sanitation.

"We work on the specific issues where we believe we can have the greatest impact for the world's poorest," the Gates Foundation statement said.

The Gates Foundation's annual event focusing on global inequality on September 24 and 25 coincides with the UN General Assembly gathering and has drawn big-name politicians and celebrities, from Barack Obama to Ed Sheeran. However, the Gates Foundation confirmed actors Jameela Jamil and Riz Ahmed have dropped out of their event.

Jamil, who stars on the US sitcom "The Good Place" hinted at the geopolitical tensions but declined to say specifics in a post on Twitter. Modi will be in the US next week to receive the foundation's award.

The prime minister will also attend a rally with President Donald Trump in Houston.

The White House said Trump will use the "Howdy, Modi! Shared Dreams, Bright Futures" event to "emphasize the strong ties between the people of the United States and India" and reaffirm the two countries' strategic partnership.