The samples, tested in the Lancet laboratory, all bore a large number of mutations, especially on the spike protein 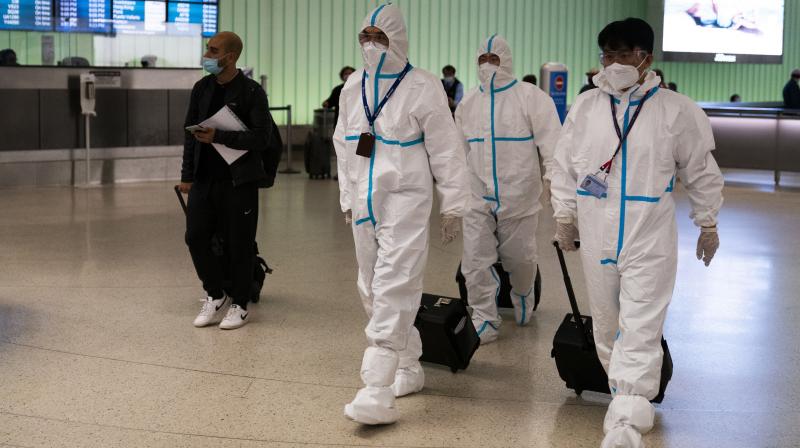 On Friday Nov. 19, Raquel Viana, Head of Science at one of South Africa's biggest private testing labs, sequenced the genes on eight coronavirus samples - and got the shock of her life.

The samples, tested in the Lancet laboratory, all bore a large number of mutations, especially on the spike protein that the virus uses to enter human cells.

"I was quite shocked at what I was seeing. I questioned whether something had gone wrong in the process," she told Reuters, a thought that quickly gave way to "a sinking feeling that the samples were going to have huge ramifications".

She quickly picked up the phone to her colleague at the National Institute for Communicable Diseases (NICD) in Johannesburg, gene sequencer Daniel Amoako.

"I didn't quite know how to break it to them," she recalls. She told Amoako, "To me, it looks like a new lineage."

The discovery of the Omicron variant in southern Africa has caused global alarm, with countries limiting travel from the region and imposing other restrictions for fear it could spread quickly even in vaccinated populations.

Amoako and the team at the NICD spent the Nov. 20-21 weekend testing the eight samples which Viana sent them, all of which had the same mutations, he told Reuters on Tuesday.

It was so bizarre that Amoako, his colleague Josie Everatt and other colleagues also thought it must be a mistake. Then they remembered that over the week, they'd noticed a sharp rise in COVID-19 cases, of the sort that might indicate a new mutant.

In addition, Viana had been alerted to an oddity in the sample earlier this month by a colleague - an S-gene dropout, one of the mutations that now distinguishes the new Omicron variant of the coronavirus from the globally dominant Delta one.

The only common variant with that feature was Alpha, "and we hadn't seen Alpha (in South Africa) since August," Everatt recalls thinking as they tested the samples.

By Tuesday, Nov. 23, after testing another 32 from around Johannesburg and Pretoria, "it was clear," Amoako said.

On the same Tuesday, the NICD team informed the department of health and other labs across South Africa doing sequencing, which later started coming up with similar results.

The same day, the NICD entered the data into the GISAID global science database, and found that Botswana and Hong Kong had also reported cases with the same gene sequence.

On Nov. 24, NICD officials and the department notified the World Health Organisation.

By that stage, Viana said, more than two-thirds of positive tests in Gauteng, the South African province that includes Pretoria and Johannesburg, were showing the S-gene dropout - a sign that Omicron was already becoming dominant.

Thanks to Omicron, South Africa's daily COVID-19 infection rate is expected to quadruple to more than 10,000 by the end of this week, one of the country's leading infectious disease specialists, Salim Abdool Karim, said on Monday.

The important questions - how good is the new variant at evading immunity from vaccines or past illness, how severe are the symptoms, compared with previous versions, and how will this differ among age groups - remain to be answered.

Three scientists interviewed by Reuters who are working on those questions expect answers in about 3-4 weeks.

In the meantime, South African President Cyril Ramaphosa is considering introducing mandatory vaccination in some contexts, with the country still reeling from 3 million COVID-19 infections in total during the pandemic and over 89,000 deaths.

There is much anger in South Africa at the foreign travel bans - some of it directed at the scientists. Amoako receives some angry messages saying they should just "stop looking" for new variants.

Wolfgang Preiser, a virologist at Stellenbosch University working on COVID-19, who also has received hate mail, worries that other countries might take this whole saga as a lesson not to be so transparent.

"It might encourage other countries to hide things, or rather, just not to look," he said.

"That's the fear. Looking is quite an investment, so maybe they will conclude, 'let's not bother'."