Leftovers are charged at the rate of Rs 100 per 10 gm. And the money goes to an orphanage 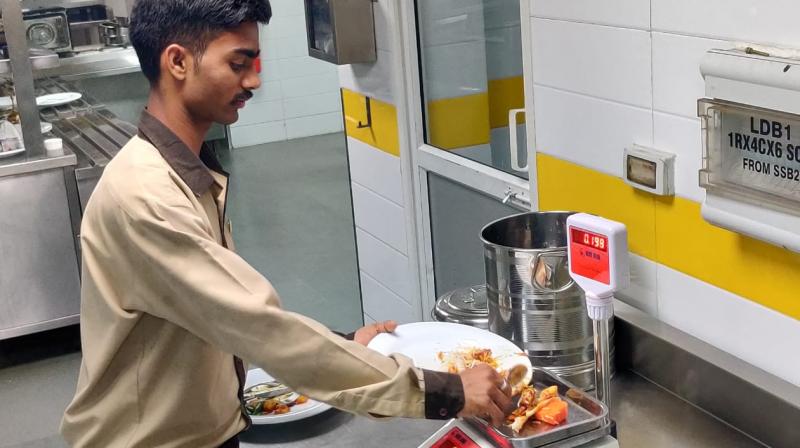 A resort worker weighs food wasted by a guest. Leftovers are charged Rs 100 per 10 grams.

Bengaluru: You’ve heard your gran say it at the dinner table: waste nought. Over one-third of all food produced globally goes waste, and if food waste were a country it would be the third largest emitter of greenhouse gases. Twenty-five per cent of the world’s water supply is used to grow food that is never eaten.

One luxury resort situated in the hills of Coorg, Karnataka has paid heed to that suppertime sermon. At Ibnii Spa and Resort food wasted by guests is weighed and billed to the atithi at the rate of Rs 100 per 10 gm.

There has been a drastic decrease in the quantity of food waste since the initiative was taken up. We know that from the number of waste bins: it has come down from 14 to 1.
Ibnii’s CSR adviser Shreya Krishnan told Deccan Chronicle that the resort’s composting units used to be overworked with 14 large bins collecting food waste daily. So it was decided to decrease the portions. The guests were told they could place any number of orders. But the wastage went on.

That when it was decided to charge guests for the food they have not eaten. The process is simple: at the end of every meal ordered by a guest, whatever is left over is weighed on a scale in front of them. At the end of the stay, the guests are told at checkout how much they wasted. They have to cough up Rs 100 per every 10 gm. The payout is dropped straight into a donation box.

It’s been six months since the initiative was taken up and Shreya Krishna said the initiative works. "We have seen a drastic decrease in the quantity of food waste. From fourteen waste bins every day, we now only need one.”

There has been no blowback from the guests too; they rather appreciate it.