This quaint little town in Haryana will take you on an epic journey back to days when it all battles and swords! 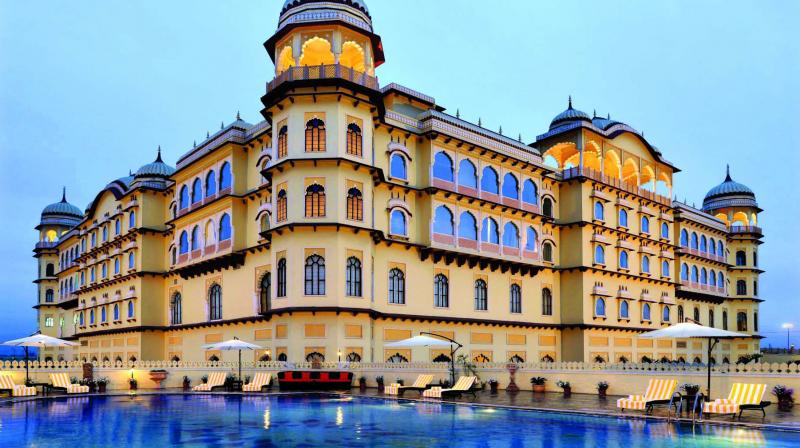 Located in Haryana, the quite town of Kurukshetra is a lesser-known pilgrimage for Indian devotees.

In Hinduism, the holy book of Mahabharata is regarded as one of the longest epics from ancient India depicting the Kurukshetra war fought between the Kauravas and the Pandava princes. It is believed that in the ancient India, the Kurukshetra bhumi (aka Dharmakshetra or the holy land) developed between two rivers namely Saraswati and Dhrishadvati spreading over five modern-day districts of Haryana – Kurukshetra, Karnal, Jind, Panipat and Kaithal.

Located in Haryana, the quite town of Kurukshetra is a lesser-known pilgrimage for Indian devotees. According to historians, this is the city where Lord Krishna once sermonised the entire Bhagwad Gita to Arjun and guided him during the battle of Mahabharata. The place was also frequented by Sikh gurus and Buddhist monks in older times, as they came here for meditation and self introspection. One can still find the remains of stupas between the Brahma Sarovara and the Kurukshetra University and anecdotes of Lord Buddha visiting the land of temples and ponds.

Legends of the region
While we crossed the lush fields of sugarcane, mustard and rice to reach our destination, some ancient sites piqued our curiosity about the compounds spread across the semi-rural city. It’s a delightful trail for a history buff, as several monuments and temples that are mentioned in the Mahabharat can still be found here. Perhaps, you can read up the books before you visit or simply ask the local guides to share stories and facts about the significant spots across the city. For instance, did you know that the Brahma Sarovar water tank is one of the largest man-made bathing tanks in Asia? And, that it was built by the Kuru kings as this was the land where Brahma performed his first sacrifice. It is a popular pilgrim reservoir and devotees congregate here to take a bath because a dip here during the solar eclipse is equated with performing 1000 ashwamedha yagna (horse sacrifices).

Surrounding the Brahma Sarovar are the Bhishma Kund, Sannahit Sarovar and a massive bronze statue depicting the chariot of Lord Krishna and Arjun during the war. The other famous site is Jyotisar, where Bhagavad Gita was delivered to Arjuna under the sacred Banyan tree, which is still alive and many people come here to meditate under its huge canopy. For those interested in historical tombs, the maqbara of Sufi Saint Sheikh Chehli built during the Mughal era is also an interesting add on in the itineary.

On the way
From history to modern science – be surprised by some interesting tourist attractions like the Kalpana Chawla Planetarium and the Kurukshetra Panorama and Science Centre located next to Shrikrishna Museum in Thanesar. Apart from a spread out Science Park with vivid experiments, the museum has a life-like panorama of the epic battle of Kurukshetra with light and sound effects describing the prominent tales from the ancient battleground. While at the nearby Shrikrishna Museum one can study the various artifacts, life stages and collectibles from the world depicting the story of Lord Krishna.

A must visit near the city is the modern-day marvel called the Noor Mahal, a decade-old palatial haveli in Karnal. The Mughal and Rajasthan inspired architecture and décor of this palace makes it a popular wedding destination and a popular weekend getaway among corporate groups from Delhi-NCR and Punjab. The beautiful palatial structure is designed by Himmat Singh, the renowned architect and Dada Saheb Phalke winner from Delhi, and vetted by famous Gujrati architect Nimish Patel. The palace endorses the opulent royalty of the Indian maharajas and is built in multi-level format with old-school courtyards called the Deewan-e-Aam and Deewan-e-Khas laid out in the Eastern and Western axis respectively.

A popular eating spot here is the Frontier mail restaurant, designed as a train compartment inspired by the legendry Frontier Mail express that operated between Mumbai and Peshawar during pre-independence days. The elements of this outlet takes inspiration from the actual train and the menu here comprise of cuisines from the regions through which the train made its initial journey. One can also enjoy the delicious local cuisine like saag-roti, chole-kulcha, chuparustam kebabs and creamy lassi while visiting the city.

Plan your visit
Throughout the year the town is quite low-key, but in December it gets bustling with the international and local visitors who participate at the International Gita Mahotsav and celebrate the Gita Jayanti to commemorate the heritage of the city. One can shop from more than 300 national and international stalls that pop up around the Brahma Sarovar area and attend sessions and religious discussions around this time. The closest railway station is Kurukshetra and the nearest airports are in Delhi and Chandigarh. Since it’s just three hours drive from Delhi, one can plan a quick visit from the capital and explore the relics of mythology treasured in modern times.