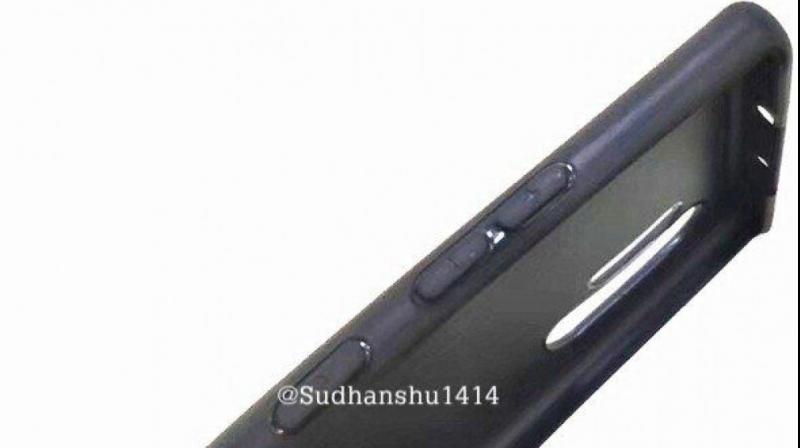 The case fits in line with all the previous leaks and renders of the Galaxy Note 10 Pro. (Photo: @Sudhanshu1414)

Samsung is rumoured to announce the Galaxy Note 10 in August and the leaks of the handset are picking up pace. After various graphic designers revealed their renditions of the handset, a silicone case has now surfaced thereby confirming all the rumoured design changes expected to feature with Samsung’s next flagship.

As per a report by GSMArena, the case fits in line with all the previous leaks and renders of the device that had surfaced in the past and most notably, there isn’t a cutout for the 3.5mm audio jack. The top of the case appears to have cutouts for an IR sensor while the rear has an opening for the vertically aligned triple camera setup. There is also a separate cutout for the flash and likely heart rate/blood pressure sensors.

The Samsung Galaxy Note 10 Pro will come loaded with a 4170mAh battery, a 6.8-inch Dynamic AMOLED display and 256GB of onboard storage. The handset will come with 12GB of RAM and the triple camera setup will comprise of a regular, ultra-wide and telephoto lens.

The display on the handset will come with a 60Hz refresh rate and possibly an HDR10+ screen that will enhance the overall experience.

Up-front, the Samsung Galaxy Note 10 will come with a punch-hole camera cutout that will host a single front-facing camera. There will not be a dual selfie camera even on the higher-end handset. The device will come with an in-display fingerprint sensor that’s said to be similar to the one found on the Galaxy S10. Samsung is believed to be using an ultrasonic fingerprint scanner on the Note 10 series.