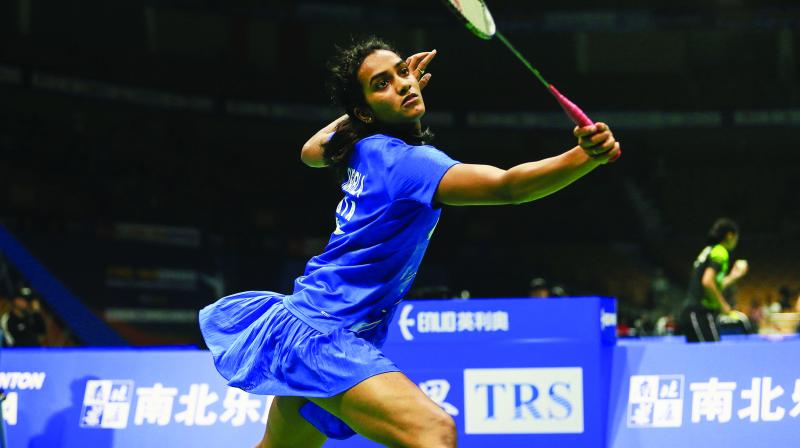 P. V. Sindhu hits a return against Sayaka Takahashi of Japan during their womens singles first round match at the Badminton Asia Championships in Wuhan, China, on Wednesday. Sindhu won 21-14, 21-7. (Photo: AFP)

Sindhu looked in command from the beginning and registered a thumping 21-14, 21-7 victory in just 28 minutes. The fourth-seeded Indian will next face Choirunnisa of Indonesia.

World number nine Saina had to work hard to get the better of China’s Han Yue.

The seventh seeded Indian came back strongly to pull off a thrilling 12-21, 21-11, 21-17 win after conceding the first game. She will next meet Kim Ga Eun of South Korea.

In men’s singles, fifth seed Srikanth lost to Indonesia’s Shesar Hiren Rhustavito in 16-21, 20-22 in a match that lasted 44 minutes. This was the Indian Open finalist’s second meeting with Rhustavito.

It was end of the road for the men’s doubles pair of M. R. Arjun and Ramchandran Shlok, who went down 18-21, 15-21 to the Chinese duo of He Jiting and Tan Qiang.

In the women’s doubles event India’s campaign came to end as all three pairs lost their matches.

Aparna Balan-Sruthi K. were ousted after a 12-21, 10-21 loss in just 25 minutes to the unseeded Singaporean pairing of Jin Yujia and Sugiarto and Barkah Yulfira.